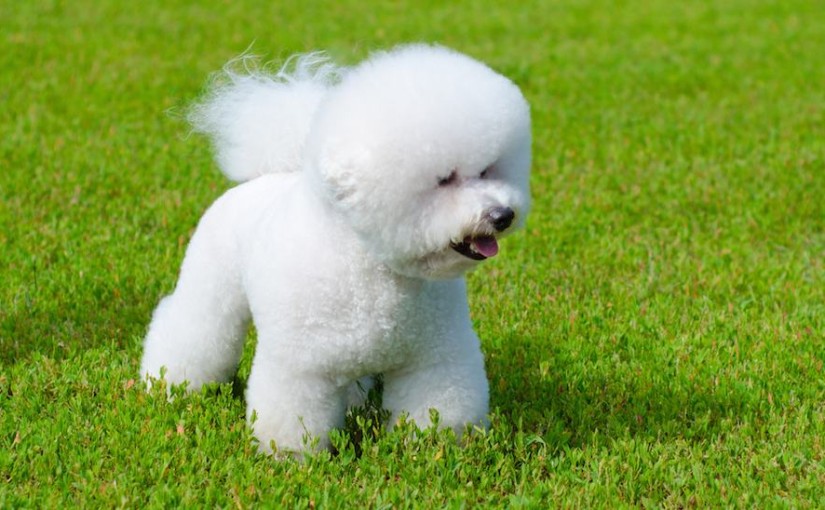 Bichon Frise originated in the Canary Islands and was formerly called the Bichon Teneriffe after the largest of this group of islands. It has been bred as a companion dog because of its friendly and affectionate nature.

General Appearance: The Bichon Frise is a small, sturdy, white powder puff of a dog. Its darkeyed, intelligent expression, and plumed tail carried jauntily over the back attest to its merry temperament and create an overall air of elegance and dignity. This is a breed that has no gross or incapacitating exaggerations and therefore, there is no inherent reason for lack of balance or unsound movement. Any deviation from the ideal described in the standard should be penalized to the extent of the deviation. Structural faults common to all breeds are as undesirable in the Bichon Frise as in any other breed, even though such faults may not be specifically mentioned in the standard.

Bichon Frise Temperament: Alert, gentle mannered, playful and affectionate. A cheerful attitude is the hallmark of the breed and one should settle for nothing less. 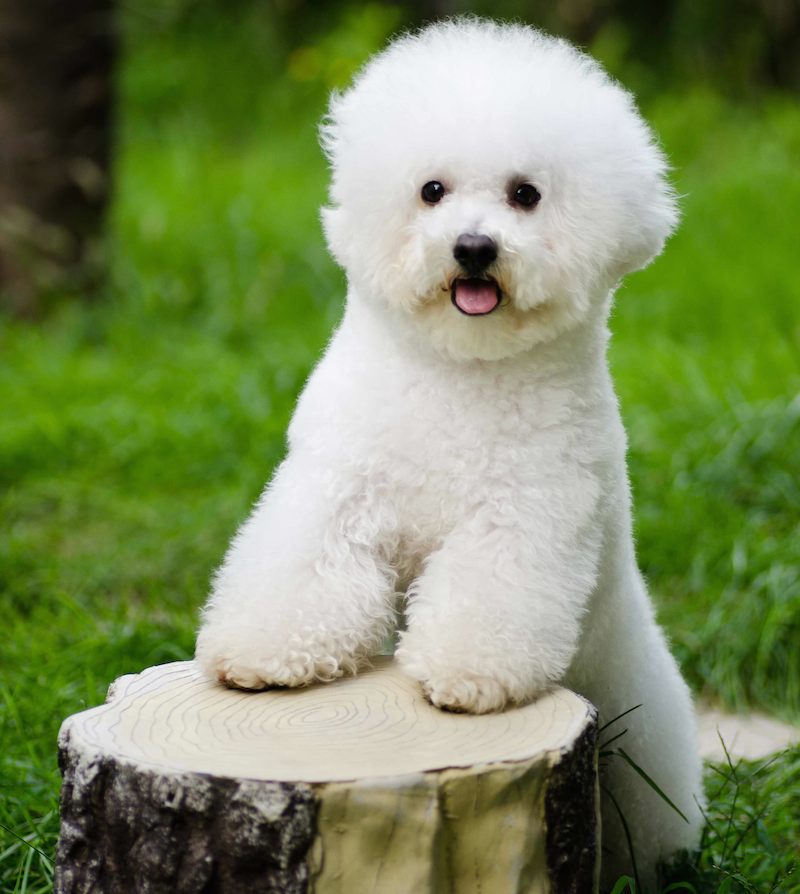 Size: Dogs and bitches 9.5 inches (24 cm) to 11.5 inches (29 cm) are to be given primary preference. Only where the comparative superiority of a specimen outside this range clearly justifies it, should greater latitude be taken. In no case, however, should this latitude ever extend over 12 inches (23 cm) or under 9 inches (30 cm). The minimum limits do not apply to puppies.

Coat and Colour: The texture of the coat is of utmost importance. The undercoat is soft and dense, the outer coat of a coarser and curlier texture. The combination of the two gives a soft but substantial feel to the touch which is similar to plush or velvet and when patted, springs back. The coat is trimmed to reveal the natural outline of the body. It is rounded off from any direction and never cut so short as to create an overly trimmed or squared off appearance. The furnishings of the head, beard, moustache, arch of neck, ears and tail are left longer. The longer head hair is trimmed to create an overall rounded impression. The topline is trimmed to appear level. The coat is long enough to maintain the powder puff look which is characteristic of the breed, and when bathed, brushed and trimmed, the coat stands off the body, creating an overall powder puff appearance. A wiry coat is not desirable. A limp silky coat that lies down, or a lack of undercoat are very serious faults.

The colour is white. There may be shadings of buff, cream or apricot around the ears or on the body. Any colour in excess of 10% of the entire coat of a mature specimen is a fault and should be penalized, but colour of the accepted shadings should not be faulted in puppies.

Head: The skull is slightly rounded, allowing for a round and forward looking eye. The skull should be broad, not coarse, covered with a topknot of hair giving it a rounded appearance. Muzzle: A properly balanced head is three parts muzzle to five parts skull. This is measured from the nose to the stop and from the stop of the occiput. The stop is slightly accentuated. A line drawn between the outside corners of the eyes and to the nose will create a near equilateral triangle. There is a slight degree of chiselling under the eyes, but not so much as to result in a weak or snipey foreface. The lower jaw is strong. Nose: The nose is prominent and always black. Mouth: Lips are black, fine, never drooping. Bite is scissors. A bite which is undershot or overshot should be penalized. A crooked or out of line tooth is permissible, however missing teeth are to be severely faulted. Eyes: Eyes are round, black or dark brown and are set in the skull to look directly forward. An overly large or bulging eye is a fault as is an almond shaped, obliquely set eye. Halos, the black or very dark brown skin surrounding the eyes, are necessary as they accentuate the eye and enhance expression. The eye rims themselves must be black. Broken pigment, or total absence of pigment on the eye rims produce a blank and staring expression, which is a definite fault. Eyes of any colour other than black or dark brown is a very serious fault and must be severely penalized. Ears: The ears are dropped and covered with long, flowing hair. When extended towards the nose, the leathers reach approximately halfway the length of the muzzle. They are set on slightly higher than eye level and rather forward on the skull so that when the dog is alert they frame the face.

Neck: The arched neck is long and carried proudly behind an erect head. It blends smoothly into the shoulders. The length of neck from occiput to withers is approximately one-third the distance from forechest to buttocks.

Forequarters: Shoulders: The shoulder blade, upper arm and forearm are approximately equal in length. The shoulders are laid back to somewhat near a forty-five degree angle. The upper arm extends well back so the elbow is placed directly below the withers when viewed from the side. The elbows are held close to the body. Lower Arm Legs are of medium bone; straight, with no bow or curve in the forearm or wrist. The pasterns slope slightly from the vertical. The dewclaws may be removed.

Topline: The topline is level except for a slight, muscular arch over the loin. The chest is well developed and wide enough to allow free and unrestricted movement of the front legs. The lowest point of the chest extends at least to the elbow. The forechest is well pronounced and protrudes slightly forward of the point of shoulder. The rib cage is moderately sprung and extends back to a short and muscular loin.

Abdomen: The abdomen is well muscled, not flabby, with a moderate tuck-up.

Loin: The loin is short and muscular.

Croup: There is a slight, muscular arch over the loin. The croup is level.

Upper Thigh/Lower Thigh: The upper and lower thighs are nearly equal in length, meeting at the stifle bend.

Hocks: The leg from hock joint to foot pad is perpendicular to the ground.

Feet: The paws are tight and round with black, thick pads. The dewclaws may be removed. Nails are kept short.

Tail: The tail is well plumed, set on level with the topline and curved gracefully over the back in line with the spine so that the hair of the tail rests on the back. The tailbone is not to touch the back. Carried in this way and extended forward towards the head it reaches at least halfway to the withers. A low tail set, a tail carried perpendicular to the back or a tail which droops behind is to be penalized. A corkscrew tail is a very serious fault.

Gait: Movement at a trot is free, precise and effortless. In profile, the forelegs and hind legs extend equally with an easy reach and drive that maintains a steady topline. When moving, the head and neck remain somewhat erect and as speed increases there is a very slight convergence of legs toward the centre line. Moving away, the hindquarters travel with moderate width between them and the foot pads can be seen. Coming and going, movement is precise and true.

: Over 12 inches (30 cm) or under 9 inches (23 cm), yellow eyes; black hair in the coat; pink eye rims and/or nose; showing aggression by biting or snapping. 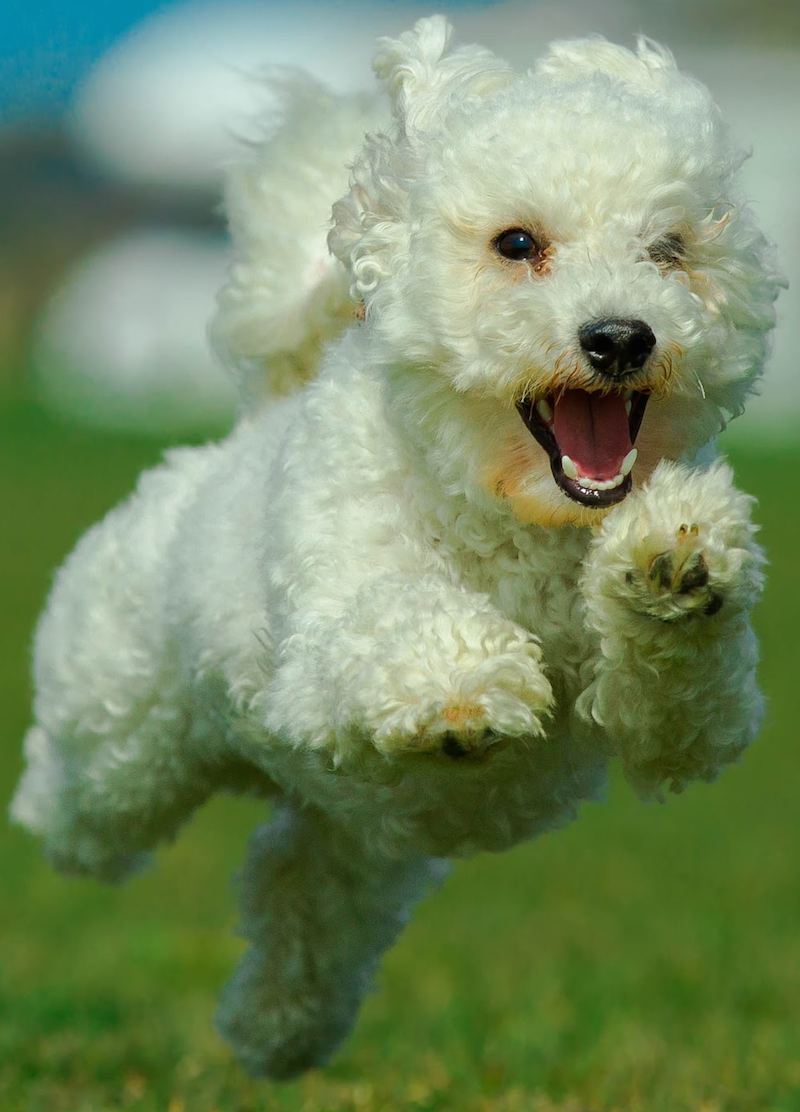