Chinese Shar Pei was once known as the rarest breed in the world. It is generally accepted that the Chinese SharPei originated during the Han Dynasty (202 BC-220 AD) in the village of Dah-Let near the South China Sea. These dogs were all-purpose working dogs to guard the family, farms and temples.

The ancient Chinese Shar Pei teetered on the brink of extinction in the early 1970s when a Hong Kong fancier appealed to Americans for help in saving the breed. North Americans responded, attracted by the unusual appearance and charm of the breed. A few were imported, breeding programs were set up and the breed’s popularity fairly mushroomed. Pups start out with heavily wrinkled coats but usually manage to fill them out fairly well as adults. Like the Chow Chow, Shar Pei has a blue-black tongue. General Appearance: An alert, dignified, active, compact dog of medium size and substance, square in profile, close-coupled, the well-proportioned head slightly but not overly large for the body. The short, harsh coat, the loose skin covering the head and body, the small ears, the hippopotamus muzzle shape and the high set tail impart to the SharPei a unique look peculiar to him alone. The loose skin and wrinkles covering the head, neck and body are superabundant in puppies but these features may be limited to the head, neck and withers in the adult.

Shar Pei Temperament: Regal, alert, intelligent, dignified, lordly, scowling, sober and snobbish, essentially independent and somewhat standoffish with strangers, but extreme in his devotion to his family. The Shar Pei stands firmly on the ground with a calm, confident stature.

Size: The height is 18 to 20 inches (45-50 cm) at the withers. The weight is 40 to 60 pounds (18-27 kg). The dog is usually larger and more square bodied than the bitch but both appear well proportioned. Proportion: The height of the Shar Pei from the ground to the withers is approximately equal to the length from the point of breastbone to the point of rump.

Coat: The extremely harsh coat is one of the distinguishing features of the SharPei breed. The coat is absolutely straight and off-standing on the main trunk of the body but generally lies somewhat flatter on the limbs. The coat appears healthy without being shiny or lustrous. Acceptable coat lengths may range from extremely short horse coat up to the brush coat, not to exceed one inch in length at the withers. A soft coat, a wavy coat, a coat in excess of 1” (2.5cm) in length at the withers or a coat that has been trimmed is a major fault. One coat type is not to be preferred over the other. The Shar-Pei is shown in its natural state.

Colour: Only solid colours and sable are acceptable and are to be judged on an equal basis. A solid coloured dog may have a shading, primarily darker down the back and on the ears. The shading must be variations of the same body colour (except in sables) and may include darker hairs throughout the coat. A pigmented dog may have a darker mask on the face.

Head: Large, slightly but not overly, proudly carried and covered with profuse wrinkles on the forehead continuing into side wrinkles framing the face. Eyes Dark, small, almond-shaped and deep set, displaying a scowling expression. In the dilute coloured dogs the eye colour may be lighter. Ears Extremely small rather thick, equilateral triangles in shape, slightly rounded at the tips, edges of the ear may curl. Ears lie flat against the head, are set wide apart and forward on the skull, pointing toward the eyes. The ears have the ability to move. Skull – Flat and broad, the stop moderately defined. Muzzle – One of the distinct features of the breed. It is broad and full with no suggestion of snipiness. The length from nose to stop is approximately the same as from stop to occiput. Nose Large and wide and darkly pigmented, preferably black but any colour nose comforming to the general coat colour of the dog is acceptable. In dilute colours, the preferred nose is self-coloured. Darkly pigmented cream Shar-Pei may have some light pigment either in the centre of their noses or on their entire nose. The lips and top of muzzle are well padded and may cause a slight bulge at the base of the nose. Tongue, Roof of Mouth, Gums and Flews Solid bluish-black is preferred in all coat colours except in dilute colours, which have a solid lavender pigmentation. A spotted tongue is a major fault. A solid pink tongue is a disqualification (Tongue colors may lighten due to heal stress; care must be taken not to confuse dilute pigmentation with a pink tongue). Teeth – Strong, meeting in a scissors bite. Deviation from a scissors bite is a major fault. 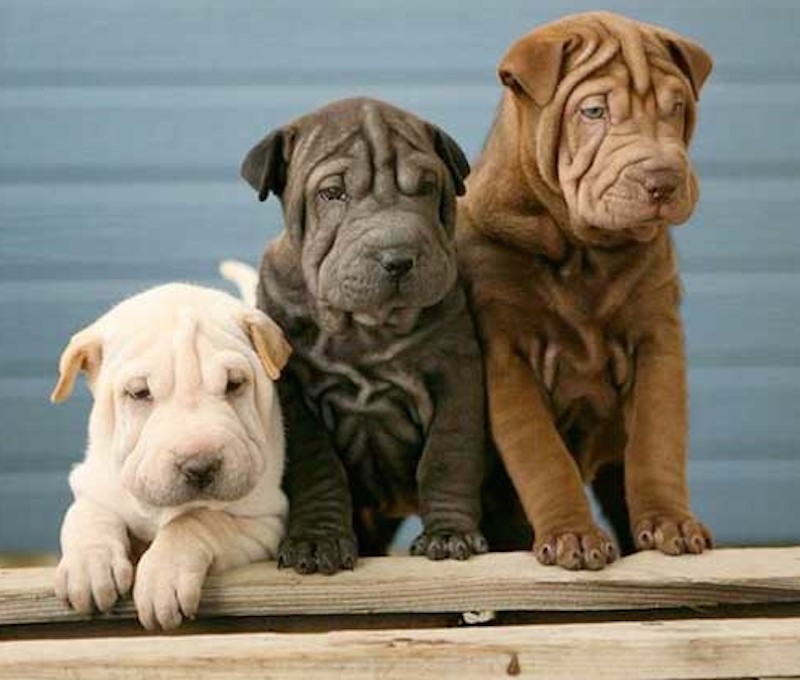 Neck: Medium length, full and set well into the shoulders. There are moderate to heavy folds of loose skin and abundant dewlap about the neck and throat.

Forequarters: Shoulders – Muscular, well laid back and sloping. Forelegs – When viewed from the front, straight, moderately spaced, with elbows close to the body. When viewed from the side, the forelegs are straight, the pasterns are strong and flexible. The bone is substantial but never heavy and is of moderate length. Removal of front dewclaws is optional. Feet – Moderate in size, compact and firmly set, not splayed.

Body: Topline -The topline dips slightly behind the withers, slightly rising over the short, broad loin. Chest – Broad and deep with the brisket extending to the elbow and rising slightly under the loin. A level, roached or swayed topline shall be faulted. Back – Short and close-coupled. Croup – Flat, with the base of the tail set extremely high, clearly exposing an uptilted anus.

Hindquarters: Muscular, strong, and moderately angulated. The metatarsi (hocks) are short, perpendicular to the ground and parallel to each other when viewed from the rear. Hind dewclaws must be removed. Feet as in front.

Tail: The high set tail is a characteristic feature of the Shar-Pei. A low tail shall be faulted. The tail is thick and round at the base, tapering to a fine point and curling over to either side of the back. The absence of a complete tail is a disqualification.

Gait: The movement of the Shar-Pei is to be judged at a trot. The gait is free and balanced with the feet tending to converge on a centre line of gravity when the dog moves at a vigorous trot. The gait combines good forward reach and a strong drive in the hindquarters. Proper movement is essential.

1. Deviation from a scissors bite.

3. Absence of a complete tail.

4. Not a solid colour, i.e. Albino; Brindle; Parti-coloured (patches); spotted (including spots, ticked or roaning); Tan-Pointed Pattern (including typical black and tan or saddled patterns or shading that has a defined pattern i.e. distinct butterfly pattern on the chest).