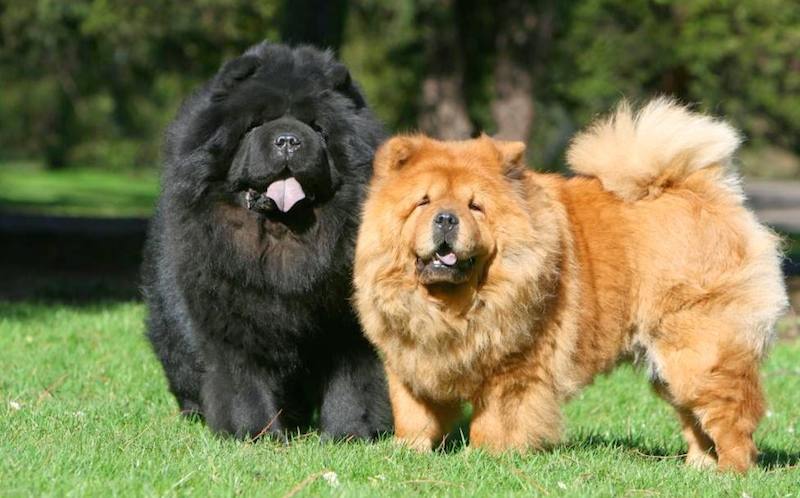 Chow Chow is an ancient dog breed of Northern Oriental origin. As a working breed in its area of origin, the Chow Chow was used to guard and hunt. Today, the Chow is primarily a family companion dog.

The ancient Chinese Chow Chow dates back to the Han Dynasty about 150 BC, though some historians theorize that the breed may be even older. It was originally used as a hunting dog and one Chinese emperor about the 7th century AD was said to have had a kennel of 2,500 pairs of hunting dogs of the Chow variety. Later jobs included herding, carting and guarding. The breed’s name did not come from the Chinese but rather from pidgin English when ship captains used the term “chow chow” to describe various bits of bric-a-brac instead of listing each cargo item separating. Since the dogs were often included in the miscellaneous assortment, the name came to be attached to this regal breed with its blue-black tongue. General Appearance: A cobby, powerful dog of medium size, active and alert, with strong, muscular development and perfect balance. Body squares with height of leg at shoulder; head is broad and flat, with short, broad, and deep muzzle, the whole supported by straight strong legs. Tail carried well over the back. Clothed in a off-standing smooth or rough double coat, in the rough variety the head is accentuated by a ruff; dogs to look masculine. Bitches to look feminine. When comparing the different sexes, allowance be made for bitches who may not have as much head and substance. The Chow is a masterpiece of beauty, dignity, and untouched naturalness.

Temperament: Dignified, with keen intelligence, independent spirit, aloof and reserved with strangers. Aggressiveness or timidity is undesirable. Because of its deep-set eyes, the Chow has limited peripheral vision and is best approached from the front.

Coat and Colour: There are two types of coat, rough chow chow and smooth chow chow. Both are double coated.

Rough chow chow: The coat is abundant, dense, straight, and off standing; rather coarse in texture with a soft, thick, woolly undercoat. Coat and ruff generally longer in males, than in bitches. Tail well feathered. Texture and condition should be given greater emphasis than the length. There should be no obvious trimming or shaping except for the paws.

Smooth chow chow: Should have a harsh, dense, smooth outer coat with a woolly undercoat, but the smooth’s outer coat is short and gives a sleek appearance. There should be no obvious ruff or feathering on legs and tail. The Smooth Chow Chow is judged by the same standard as the rough variety with the exception of coat length.

Colour: It may be any clear colour, solid throughout, with lighter shadings on ruff, tail, and breechings.

Head: The Head is large in proportion to the size of the dog. It is proudly carried, not over exaggerated as to make the dog seem top heavy, or to result in a low head carriage. Skull broad and flat: well filled under the eyes; moderate stop. Expression essentially dignified, lordly, scowling, discerning, sober, and snobbish-one of independence. Excessive loose skin is not desirable. Muzzle is short in comparison to length of skull but not less than 1/3 of head length. Broad from eyes to end of nose, and of equal depth. The lips somewhat full and overhanging, but not pendulous. Teeth strong and level, with a scissors bite; should neither be overshot, nor undershot. Nose large and broad. In blue or cream, black noses are preferred, but blues may have a slate coloured nose and creams may have a brown or liver coloured nose. In all other colours the nose must be black. Eyes dark, deep set of moderate size, and almond shaped, pupils should be visible. Ears small, thick, slightly rounded at tip, stiffly carried with a slight forward tilt, the inner corner of the ear to be in line with the outer corner of the eye. They should be placed wide apart, on top of the skull. This all contributes to the essential dignified lordly, discerning, scowling expression, one of independence. Tongue is blue-black; the tissues of the mouth should approximate black. A solid black mouth and gums are preferred.

Neck: Strong, full, set well on the shoulders nicely arched and of sufficient length to carry the head proudly, well above the top line when standing.

Forequarters: Shoulders muscular, slightly sloping, forelegs perfectly straight, with heavy bone and upright pasterns, placed well apart and parallel. Elbow joints set well back alongside the chest wall, elbows turning neither in or out. Feet round, catlike with thick pads, standing well up on the toes both front and rear. Dewclaws may be removed.

Body: Short, compact, close coupled, strongly muscled, broad and deep. Back short, straight, and strong. Chest broad, deep, (never narrow) and muscular, with well-sprung ribs, but not a barrel. A narrow chest is a serious fault. Loins broad, deep, and powerful, and well let down in the flank giving an overall appearance of squareness. The topline is straight, strong and level from the withers to the base of the tail. Hindquarters: Hind legs straight-hocked, muscular, and heavy boned. Rear and front bone approximately equal. Stifle shows little angulation, hock joints well let down, must be strong, well knit, never bowing or breaking forward or to the side. Hock joint and metatarsals to be in a straight line below the hip joint. Feet same as forequarters.

Tail: Set well up and carried closely to the back, following the line of spine at the start.

Gait: Completely individual to the breed. Short and stilted because of a straight stifle and straight hocks. Sound, straight moving, agile, quick and powerful, never lumbering. It is from the side that the unique stilted action is most easily viewed and assessed. The rear leg moves up and forward from the hip in a straight, stilted pendulum like line, with a slight bounce in the rump, legs extend neither far forward nor backward. There should be no roll through the midsection. Viewed from the rear, the line of bone from the hip joint to pad remains straight as the dog moves. As speed increases, the hind legs incline slightly inward. Viewed from the front, the line of bone from shoulder joint to pad, remain straight as the dog moves. As speed increases, the forelegs may incline slightly inward but the front legs must not swing out in semi circles nor mince or show any evidence of hackney action. Somewhat lacking in speed, the Chow has excellent endurance. Tongue: When a Chow Chow is first born, their tongue is pink and it only starts to turn bluish black as they start to grow. It’s at around 8 to 10 weeks later that a Chow puppy’s tongue starts to change colour, turning the bluish black the breed is so famous for. Older Chow Chows will sometimes loose the pigment in their tongues which turn a pinkish colour again, much as they were when the dogs were young.

Disqualifications: Nose spotted or distinctly any other colour than black except in blue Chows, which may have solid blue or slate nose and in creams, which may have a brown or liver coloured nose. Tongue red, pink or obviously spotted with red or pink. Drop ear or ears. A drop ear is one which is stiffly carried or stiffly erect, but which breaks over at any point from its base to its tip or which lies parallel to the top of the skull.