Keeshond dog breed was once known as the Dutch Barge Dog. Originating in the Netherlands, it has been popular there since the mid-18th century where it was often found in villages and farms as well as on the canal barges where it served as a watchdog and companion. The Keeshond has also been used for hunting, herding and draft work.

The breed’s name is pronounced “Kays-hond” and it is named for a leader of the people’s party whose nickname was ‘Kees.’ Thus the party mascot became ‘the dog of Kees’ or Keeshond. The Keeshond has another claim to fame. It is often referred to as the dog with spectacles due to distinctive markings about the eyes that enhance its expression.

Keeshond Temperament: The breed is loyal, protective and good with children. General Appearance: The Keeshond is a handsome dog, well balanced and short-coupled in the body, attracting attention not only by his alert carriage and intelligent expression, but also by his luxurious coat, his richly plumed tail, well curled over his back, and by his fox-like face and head with small pointed ears. His coat is very thick round the neck, forepart of the shoulders and chest, forming a lion-like mane. His rump and hind legs, down to the hocks, are thickly coated forming the characteristic “trousers.” His head, ears, and lower legs are covered with thick short hair. 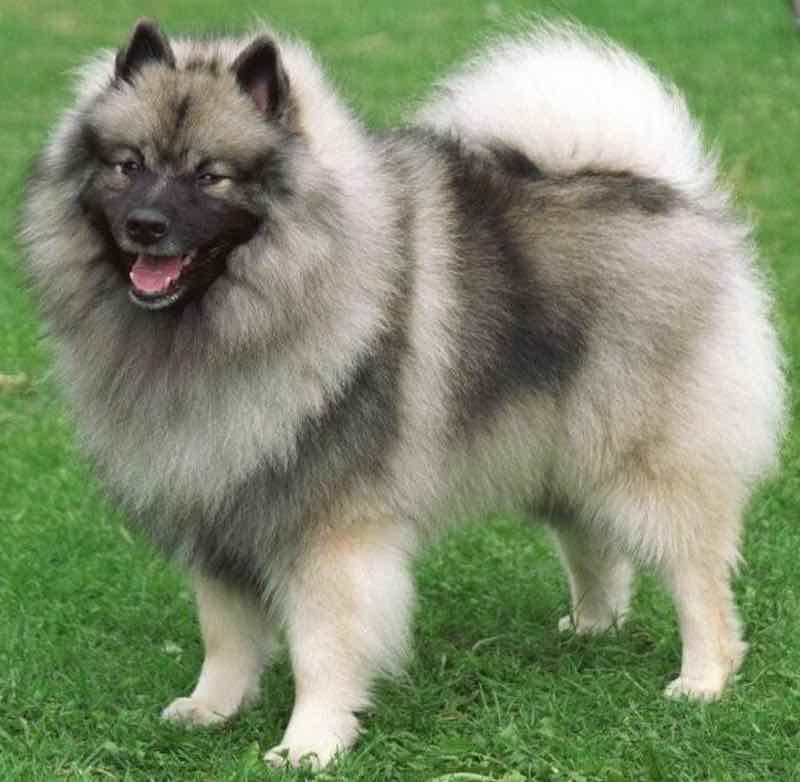 Keeshond Size: The ideal height of fully matured dogs (over 2 years old), measured from top of withers to the ground is: for males, 18 inches (46 cm); bitches, 17 inches (43 cm). However, size consideration should not outweigh that of type. When dogs are judged equal in type, the dog nearest the ideal height is to be preferred. Length of back from withers to rump should equal height as measured above. Coat and Colour: The body should be abundantly covered with long, straight, harsh hair standing well out from a thick, downy undercoat. The hair on the legs should be smooth and short, except for a feathering on the front legs and “trousers,” as previously described, on the hind legs. The hair on the tail should be profuse, forming a rich plume. Head, including muzzle, skull, and ears, should be covered with smooth, soft, short hair – velvety in texture on the ears. Coat must not part down the back.

Shoulder line markings (light gray) should be well defined. The color of the ruff and “trousers” is generally lighter than that of the body.

“Spectacles” and shadings, as later described, are characteristic of the breed and must be present to some degree. There should be no pronounced white markings.

Faults: Silky, wavy or curly coats. Part in coat down the back. Entirely black or white or any other solid color; any pronounced deviation from the gray color. Head: Expression is largely dependent on the distinctive characteristic called “spectacles” – a delicately penciled line slanting slightly upward from the outer corner of each eye to the lower corner of the ear, coupled with distinct markings and shading forming short but expressive eyebrows. Markings (or shadings) on the face and head must present a pleasing appearance, imparting to the dog an alert and intelligent expression. Skull: The head should be well proportioned to the body, wedge-shaped when viewed from above. Not only in muzzle, but the whole head should give this impression when the ears are drawn back by covering the nape of the neck and the ears with one hand. Head in profile should exhibit a definite stop. The muzzle should be dark in color and of medium length, neither coarse nor snipey, and well proportioned to the skull. The mouth should be neither overshot nor undershot. Lips should be black and closely meeting, not thick, coarse or sagging and with no wrinkle at the corner of the mouth. The teeth should be white, sound and strong (but discolouration from distemper not to be penalized severely); upper teeth should just overlap the lower teeth. Eyes should be dark brown in color, of medium size, rather oblique in shape and not set too wide apart. Ears should be small, triangular in shape, mounted high on the head and carried erect; dark in color and covered with thick, velvety, short hair. Size should be proportionate to the head – length approximating the distance from outer corner of the eye to the nearest edge of the ear.

Faults: Absence of “spectacles.” Apple head, or absence of stop. Overshot or undershot. Protruding round eyes or eyes light in color. Ears that are not carried erect when at attention.

Forequarters: Forelegs should be straight seen from any angle, and well feathered. Body: The body should be compact with a short straight back sloping slightly downward towards the hindquarters deep and strong of chest, well ribbed, barrel well rounded, belly moderately tucked up.

Tail: The tail should be set on high, moderately long, and well feathered, tightly curled over back. It should lie flat and close to the body with a very light gray plume on top where curled, but the tip of the tail should be black. The tail should form a part of the “silhouette” of the dog’s body, rather than give the appearance of an appendage.

Faults: Tail not lying close to the back.

Gait: Dogs should show boldly and keep tails curled over the back. They should move cleanly and briskly, and the movement should be straight and sharp (not a lope like a German Shepherd Dog).

Faults: Tail not carried over back when moving. 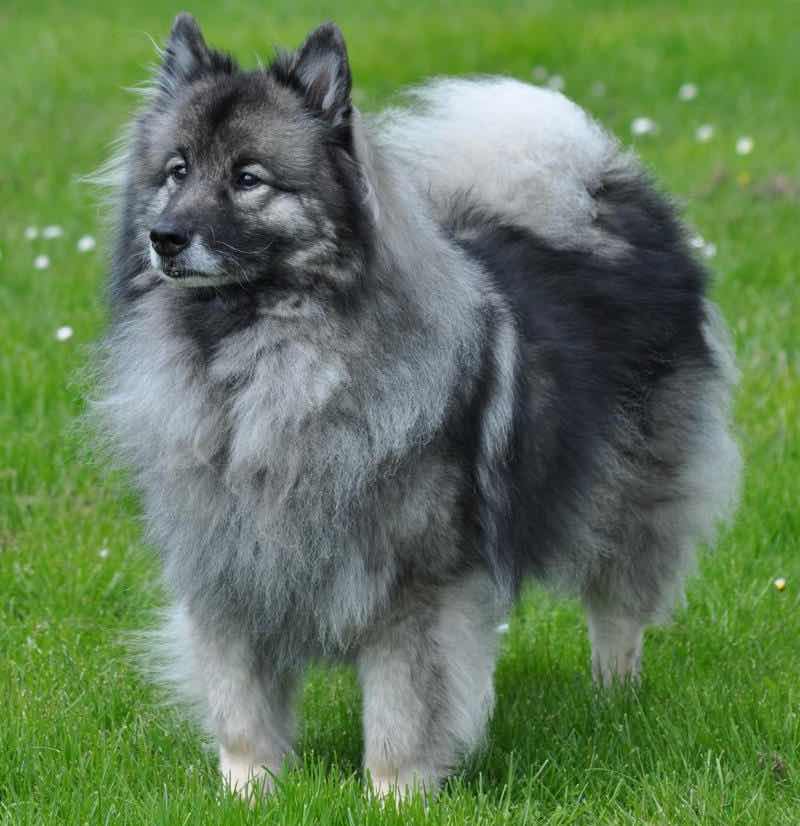