Afghan Hound dog breed is an ancient member of the greyhound family. The Afghan Hound was believed to have been brought from Arabia and Persia to Afghanistan where the breed’s long coat developed in response to the harsh climate. It was there on the border between Afghanistan and India that the breed attracted the attention of British soldiers in the latter part of the 19th century. As a result, some were brought back to Britain and were first exhibited in a show in 1907 as Oriental Greyhounds. 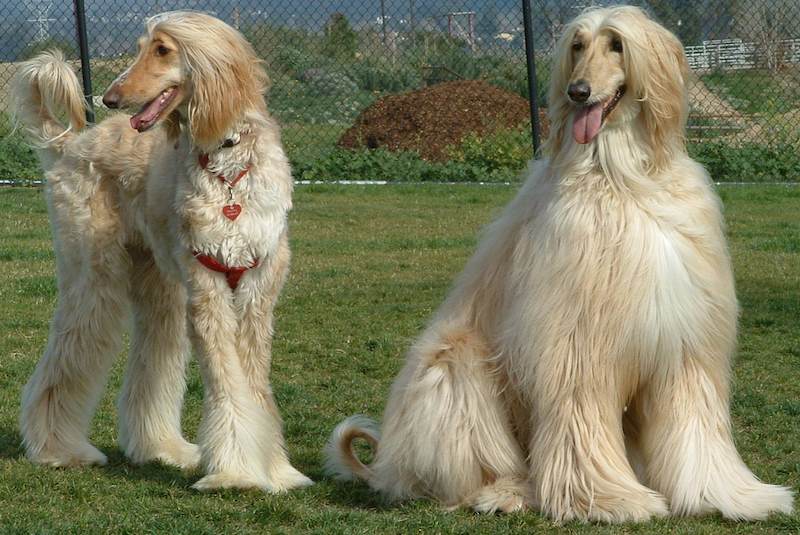 General Appearance: The Afghan Hound is an aristocrat, his whole appearance one of dignity and aloofness with no trace of plainness or coarseness. He has a straight front, proudly carried head, eyes gazing into the distance as if in memory of ages past. The striking characteristics of the breed – exotic, or “Eastern,” expression, long silky topknot, peculiar coat pattern, very prominent hip bones, large feet, and the impression of a some-what exaggerated bend in the stifle due to profuse trouserings – stand out clearly, giving the Afghan Hound the appearance of what he is, a king of dogs, that has held true to tradition throughout the ages. Coat and Colour: Hindquarters, flanks, ribs, forequarters, and legs well covered with thick, silky hair, very fine in texture; ears and all four feet well feathered; from in front of the shoulders, and also backwards from the shoulders along the saddle from the flanks and ribs upwards, the hair is short and close forming a smooth back in mature dogs – this is a traditional characteristic of the Afghan Hound. The Afghan Hound should be shown in its natural state; the coat is not clipped or trimmed; the head is surmounted (in the full sense of the word) with a topknot of long, silky hair – this also an outstanding characteristic of the Afghan Hound. Showing of short hair on cuffs on either front or back legs is permissible. All colours are permissible, but colour or colour combinations are pleasing; white markings, especially on the head are undesirable. 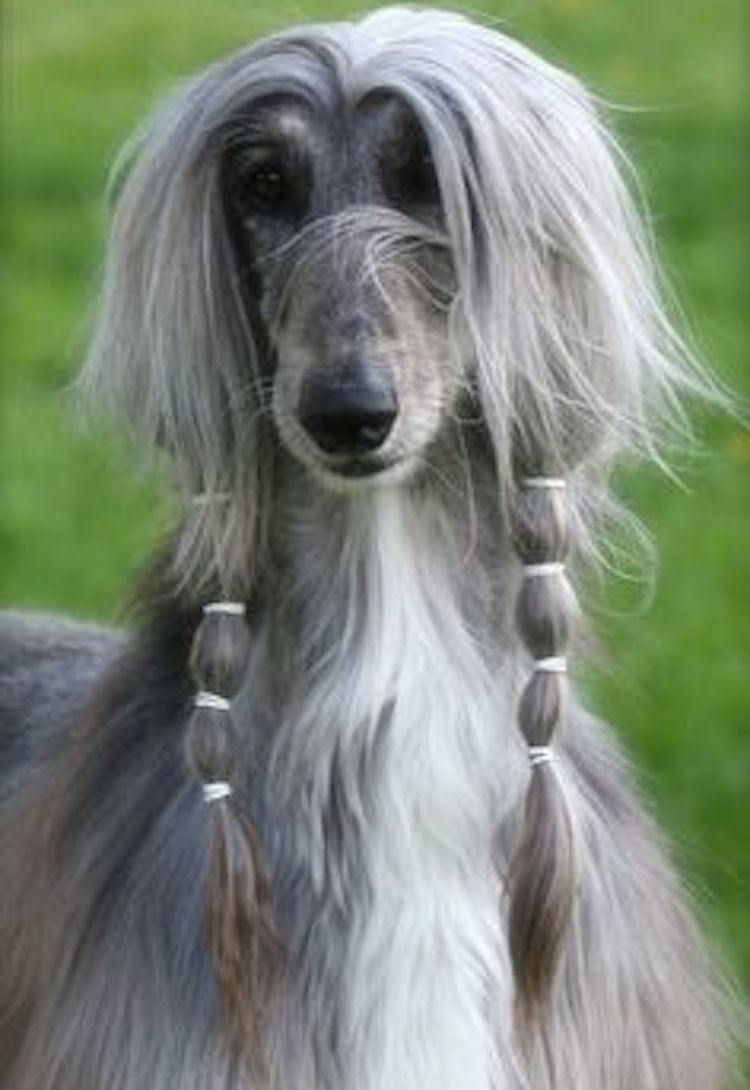 Head: The head is of good length, showing much refinement. The skull is evenly balanced with the foreface. The occipital bone is very prominent. The head is surmounted by a topknot of long silky hair. There is a slight prominence of the nasal bone structure causing a slightly Roman appearance, the centre line running up over the foreface with little or no stop, falling away in front of the eyes so there is an absolutely clear outlook with no interference; the under jaw showing great strength, the jaws long and punishing. The nose is of good size, black in colour. The mouth is level, meaning that the teeth from the upper jaw and lower jaw match evenly, neither overshot nor undershot. This is a difficult mouth to breed. A scissors bite is even more punishing and can be more easily bred into a dog than a level mouth, and a dog having a scissors bite, where the lower teeth slip inside and rest against the teeth of the upper jaw, should not be penalized. The eyes are almond shaped (almost triangular), never full or bulgy, and are dark in colour. The ears are long, set approximately on level with outer corners of the eyes, the leather of the ear reaching nearly to the end of the dog’s nose, and covered with long silky hair.

Neck: The neck is of good length, strong and arched, running in a curve to the shoulders.

Forequarters: Shoulders long and sloping and well laid back. Shoulders have plenty of angulation so that the legs are well set underneath the dog. Too much straightness of shoulder causes the dog to break down in the pasterns, and this is a serious fault. Forelegs are straight and strong with great length between elbow and pastern; elbows well held in; pasterns long and straight; forefeet large in both length and width; toes well arched; feet covered with long thick hair, fine in texture; pads of feet unusually large and well down on the ground. Body: The backline appearing practically level from the shoulders to the loins. The height at the shoulders equals the distance from the chest to the buttocks. The brisket well let down, and of medium width. Strong and powerful loin and slightly arched, falling away towards the stern, with the hip bones very pronounced; well ribbed and tucked up in flanks.

Hindquarters: Hindquarters powerful and well muscled with great length between hip and hock; hocks are well let down; good angulation of both stifle and hock; slightly bowed from hock to crotch. The hind feet are broad and of good length; the toes arched, and covered with long thick hair. All four feet of the Afghan Hound are in line with the body, turning neither in nor out. Tail: Tail set not too high on the body, having a ring, or a curve on the end; should never be curled over, or rest on the back, or be carried sideways; and should never be bushy. Gait: When running free, the Afghan Hound moves at a gallop, showing great elasticity and spring in his smooth, powerful stride. When on a loose lead, the Afghan can trot at a fast pace; stepping along, he has the appearance of placing the hind feet directly in the footprints of the front feet, both thrown straight ahead. Moving with head and tail high, the whole appearance of the Afghan Hound is one of great style and beauty. 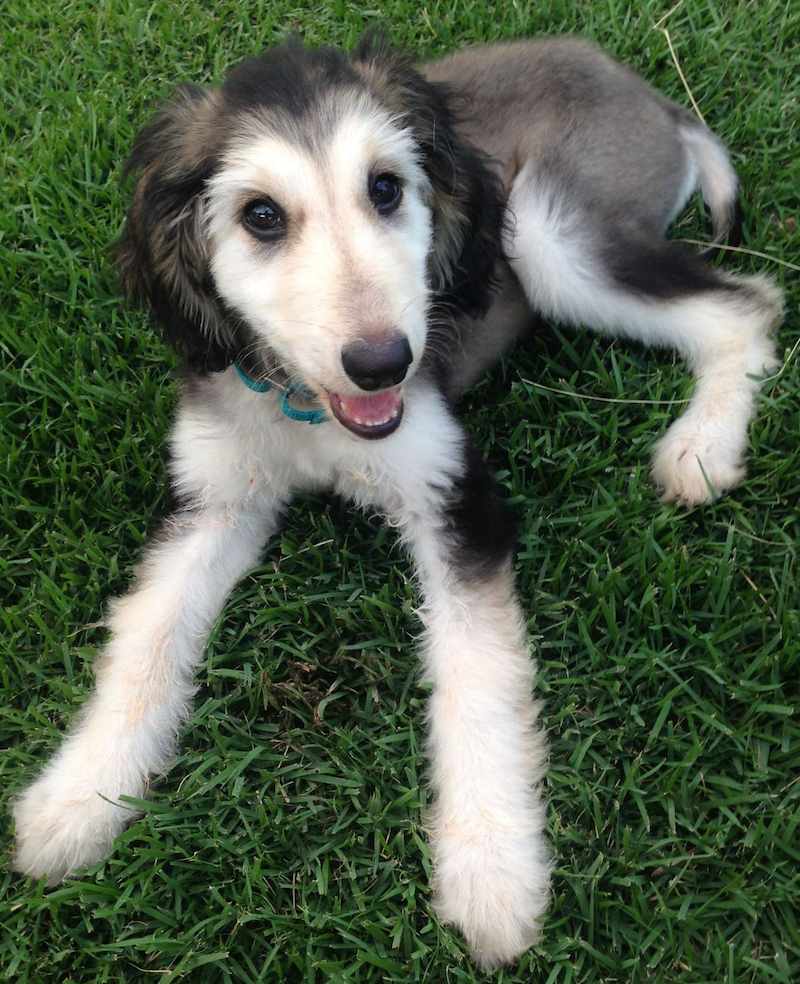 Faults: Sharpness or shyness. Lack of short-haired saddle in mature dogs. Coarseness; snipiness; overshot or undershot; eyes round or bulgy or light in colour; exaggerated Roman nose; head not surmounted with topknot. Neck too short or too thick; an ewe neck; a goose neck; a neck lacking in substance. Front or back feet thrown outward or inward; pads of feet not thick enough; or feet too small; or any other evidence of weakness in feet; weak or broken-down pasterns. Roach back, sway back, goose rump, slack loin; lack of prominence of hip bones; too much width of brisket causing interference with elbows. Too straight in stifle; too long in hock.