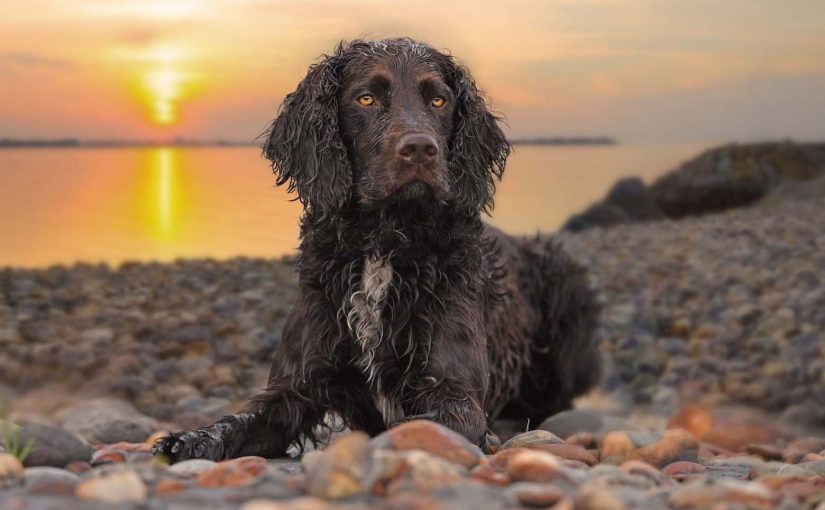 The dog type was set by 1900, but it wasn’t until 1938 that a club was formed and a breed standard was drawn up. Though there are no records to confirm the American Water Spaniel breed’s beginnings, it has been suggested that its ancestors may have included the Irish Water Spaniel as well as the Curly-coated Retriever and American Cocker Spaniel.

An all-around shooting dog, the American Water Spaniel, is an efficient retriever of the upland game, while his small size and protective coloring make him valuable for duck hunting. He’s physically and mentally tough enough to take on the frigid waters of the Great Lakes and small enough to launch himself out of a boat or clamber back in without swamping it.

Let us seek some answers related to the American Water Spaniel breed. Are they good dogs for first-time owners? Are they aggressive? Do they bark a lot? Are they good guard dogs? Are they good family dogs? Good with children? And many more questions that a potential dog owner may be concerned about.

Who developed the American Water Spaniel AWS breed? And Why?

Are they good for bird/pheasant hunting?

American Water Spaniels love to hunt! Their independent nature makes them very effective hunters once they have learned the game. They have an amazing scenting ability and develop excellent bird sense with experience. When going after wounded game, their tenacity, be it running rooster pheasants or giant Canada geese, is truly amazing to see. In the uplands, they work methodically, close to the gun and slowly enough so that one doesn’t have to hurry. They don’t waste energy and thus can hunt all day.

American Water Spaniels are tough and can handle cold and wet conditions well. At home, they are excellent watchdogs and are very comfortable just hanging around the house.

Is the American Water Spaniel hypoallergenic? Do they shed?

No. American Water Spaniels are not hypoallergenic, but they don’t shed much either. Just brush their oily, water-resistant coat once in a few days to reduce hair inside the house. If you are looking for a hypoallergenic breed of dog, here is a list of hypoallergenic dog breeds.

The American Water Spaniels coat does not require too much maintenance. They are minimal shedders, but their thick coat can become matted and tangled if it is not given an occasional brushing.

Is the AWS a good guard dog/watchdog?

Yes. American water spaniels are smart, obedient, affectionate, and known for getting along with other animals and children. They also make good watchdogs. These characteristics make them excellent family pet dogs.

How to train an American Water Spaniel to hunt and retrieve?

An American Water Spaniel is a good hunting and retrieving breed of dog. Hunting requires building multiple skills and advanced behaviors. The best hunting dogs are so well trained, in fact, that they can anticipate where they need to be at all stages and become an extension of their owner. Start with different sounds with your puppy. Slowly increase the intensity of sounds as the puppy learns to respond as well as ignore sounds. Then introduce gun sounds before you take them on a hunting excursion. The American Water Spaniel will learn quickly and will naturally know what to do with some guidance.

American Water Spaniels have a lifespan of about 13 to 15 years.

How much does an American Water Spaniel Cost? How much is an AWS puppy?

American Water Spaniels puppies cost between $1200 to $1500. Buy or adopt from a reputable breeder or someone who has dogs used for hunting/retrieving. One of the biggest hurdles you’ll have is finding lines that are relatively free of hip dysplasia. Don’s accept a flat statement, “my dogs don’t have hip dysplasia.” Make sure their parents have been checked.

Although it is tempting to look for all these qualities in one puppy you plan to buy; it is seldom possible to find all qualities in a single pup.

If you want your American Water Spaniel puppy to grow up to be a champion in the show ring, you should look for confirmation of the American Water Spaniel dog breed standards. We have put together a general guideline for selecting an all-around good puppy for you. Our guideline includes breed standards and gives importance to temperament, appearance, physical details, gait, health issues, grooming needs, and maintenance.

Look for the following characteristics while choosing an American Water Spaniel puppy.

The coat should be closely curled or have a marcel effect and should be of sufficient density to protect against weather, water, or punishing cover, yet not coarse. Legs should have medium-short, curly feathers. Colour solid liver or dark chocolate, a little white on toes or chest permissible.

Moderate in length, skull rather broad and full, stop moderately defined, but not too pronounced. Forehead covered with short, smooth hair and without tuft or topknot. The muzzle of medium length, square, and with no inclination to snippiness. Jaws strong and of good length, and neither undershot nor overshot. Teeth straight and well-shaped. Nose sufficiently wide and with well-developed nostrils to ensure good scenting power. Eyes hazel, brown, or of dark tone to harmonize with coat; set well apart. Expression alert, attractive, intelligent. Ears lobular, long and wide, not set too high on the head, but slightly above the eye line—leather extending to end of the nose and well covered with close curls. Round and medium length, strong and muscular, free of throatiness, set to carry head with dignity, but arch not accentuated.

Shoulders sloping, clean, and muscular. Legs of medium length and well boned, but not so short as to handicap for fieldwork. Forelegs are powerful and reasonably straight.

Well developed, sturdily constructed but not too compactly coupled. The general outline is the symmetrical relationship of parts. Well-sprung ribs. Strong loins, lightly arched; and well-furnished deep brisket but not excessively broad.

Moderate in length, curved in a slight rocker shape, carried slightly below the back; tapered and covered with hair to tip, action lively.

Faults that are observed in the American Water Spaniel dog breed.

We hope you enjoyed reading about the American Water Spaniel dog breed. You may consider sharing your views in the comments section below. Inputs and priceless experiences from dog owners, American Water Spaniel breeders, and dog lovers, in general, help us better understand our most loyal friends. Thank you for your interest.