Bull Terrier originated in England and is the Gladiator of the canine race. Originally billed as the Bull and Terrier, the breed was a cross between the old-time Bulldog and the now-extinct White English Terrier. Known as the white cavalier, the Bull Terrier was developed for bull baiting and in the pits against other dogs, badgers and vermin. After blood sports were abolished in England in 1835, breeders turned their talents to producing more tractable and stylized dogs. General Appearance: Must be strongly built, muscular, symmetrical and active, with a keen, determined, and intelligent expression, full of fire and courage but of even temperament and amendable to discipline. Irrespective of size, dogs should look masculine and bitches feminine. 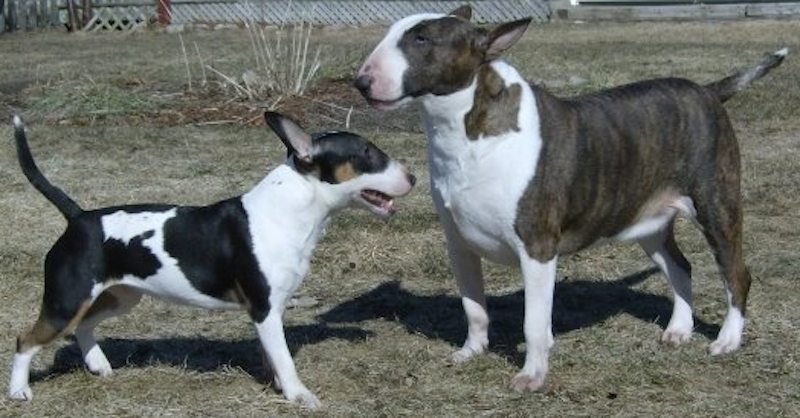 Size: There are neither weight nor height limits for the standard Bull Terrier but there should be impression of maximum substance to the size of the dog.

Coat and Colour: The coat should be short, flat, even and harsh to the touch, with a fine gloss. The skin should fit the dog tightly. For white, pure white coat. Skin pigmentation and markings on the head should not be penalized. For coloured, the colour should predominate, all other things being equal, brindle to be preferred.

Head: The head should be long, strong and deep, right to the end of the muzzle, but not coarse. Viewed from the front it should be egg shaped and completely filled, its surface being free from hollows or indentations. The top of the skull should be almost flat from ear to ear. The profile should curve gently downwards from the top of the skull to the tip of the nose, which should be black and bent downwards at the top. The nostrils should be well developed. The distance from the tip of the nose to the eyes should be perceptibly greater than that from the eyes to the top of the skull. The underjaw should be strong. Teeth should be sound, clean, strong, of good size, and perfectly regular with full dentition. Either a level bite or scissors bite is acceptable. If a scissors bite, the upper front teeth should fit in front of and closely against the lower front teeth. The lips should be clean and tight. Eyes should appear narrow, obliquely placed and triangular, well sunken, as dark as possible and with a piercing glint. Ears should be small, thin, and placed closely together. The dog should be able to hold them stiffly erect, when they should point straight upwards. Neck: The neck should be very muscular, long, arched, tapering from the shoulders to the head, and free from loose skin.

Forequarters: The shoulders should be strong and muscular but without loading. The shoulder blades should be wide, flat, and attached closely to the chest wall, and should have a very pronounced backward slope of the front edge from bottom to top. The forelegs should have the strongest type of round quality bone and the dog should stand solidly upon them; they should be moderately long and perfectly parallel. The elbows should be held straight and the strong pasterns upright. The feet should be round and compact with well-arched toes. Body The body should be well rounded with marked spring of rib, and a great depth from withers to brisket, so that the latter is nearer the ground than the belly. The back should be short and strong with the topline level behind the withers and arching or reaching slightly over the loin. The underline from the brisket to belly should form a graceful upward curve. The chest should be broad, viewed from the front.

Hindquarters: The hind legs should be parallel viewed from behind. The thighs must be muscular and the second thigh well developed. The stifle joint should be well bent and the hock well angulated, with the bone to the foot short and strong.

Tail: The tail should be short, set on low. It should be carried horizontally. Thick at the root, it should taper to a fine point.

Gait: The moving dog shall appear well knit, smoothly covering the ground with free, easy strides and with a typical jaunty air. Fore and hind legs, moving smoothly at the hip and flexing well at the stifle and hock with great thrust.