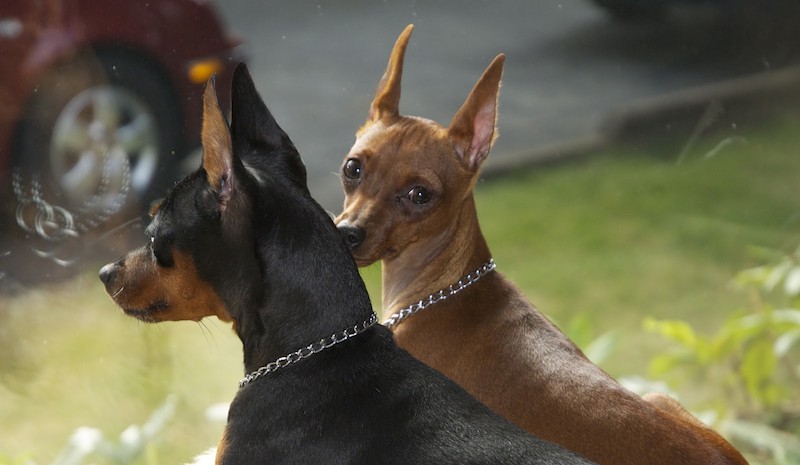 Miniature Pinscher (Min Pin) is not a miniature Doberman Pinscher! In fact, the Miniature Pinscher is a much older German breed of dog that predates the Doberman Pinscher dog breed by about 200 years. It is thought to have been developed by crossing the German smooth-haired Pinscher with smaller dog breeds, possibly the Italian Greyhound and the Smooth Dachshund. In its homeland it is often called the Reh Pinscher because of its resemblance to a small species of deer. The Miniature Pinscher breed was originally used as a barnyard ratter but has now become a popular companion toy dog. One of its most engaging characteristics is the high-stepping gait like that of a hackney pony.

General Appearance: The Miniature Pinscher originated in Germany and named the Reh Pinscher due to his resemblance in structure and animation to a very small species of deer found in the forests. This breed is structurally a well-balanced, sturdy, compact, short-coupled, smooth-coated toy dog. He is naturally well groomed, proud, vigorous, and alert. The natural characteristic traits which identify him from other toy dogs are his precise Hackney gait, his fearless animation, complete self-possession, and his spirited presence.

Faults: Structurally lacking in balance, too long or short-coupled, too coarse or too refined (lacking in bone development causing poor feet and legs), too large or too small, lethargic, timid or dull, shy or vicious, low in tail placement and poor in action (action not typical of the breed requirements). Knotty overdeveloped muscles. 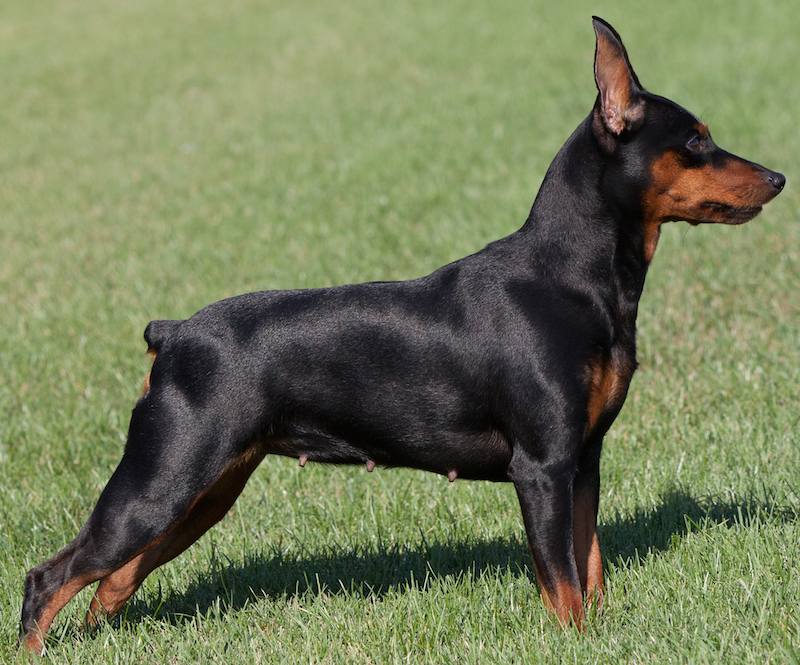 Coat: smooth, hard and short, straight, and lustrous, closely adhering to and uniformly covering the body. 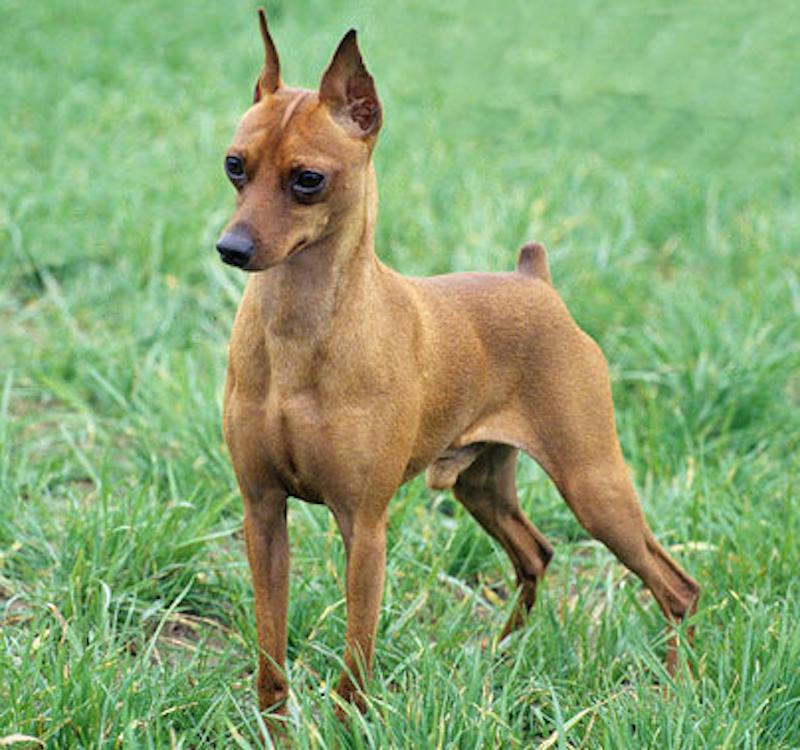 (b) Lustrous black with sharply defined tan, rust-red markings on cheeks, lips, lower jaw, throat, twin spots above eyes, and chest, lower half of forelegs, inside of hind legs and vent region, lower portion of hocks and feet. Black pencil stripes on toes. 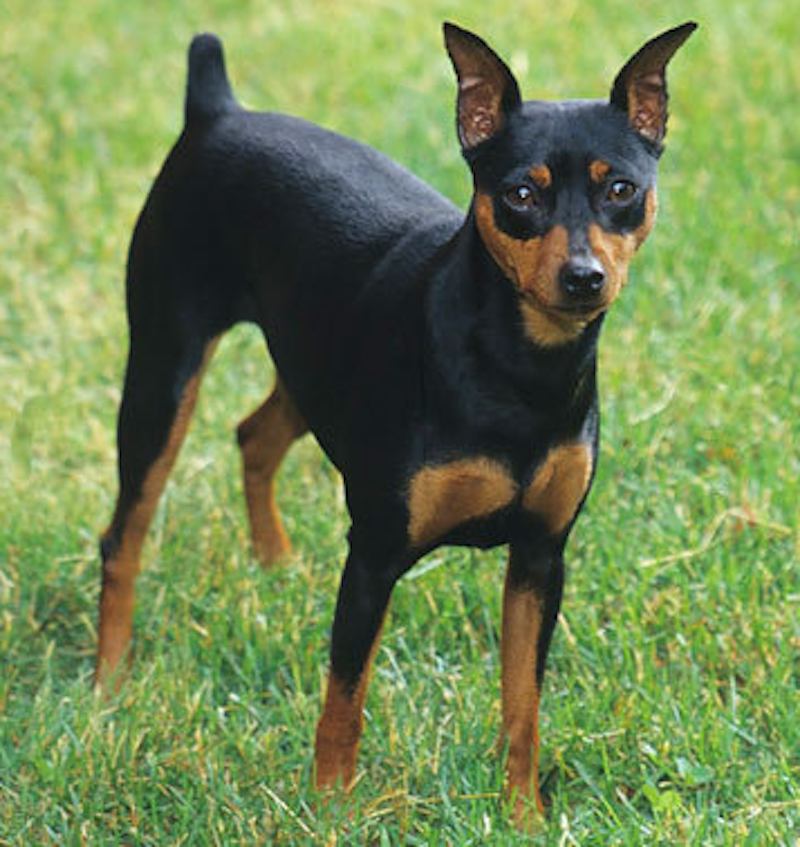 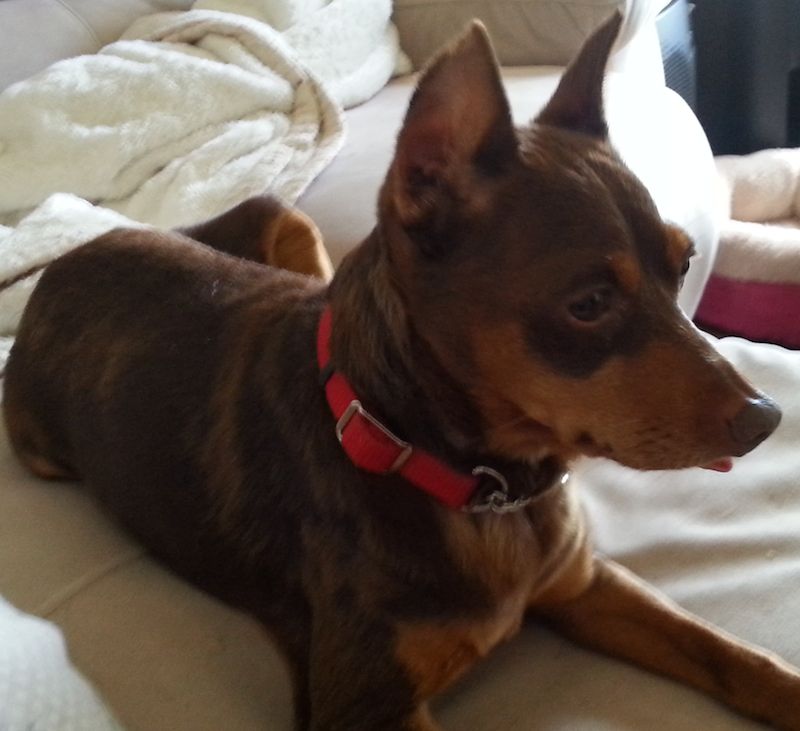 Head: In correct proportion with the body. From top: Tapering, narrow with well-fitted but not too prominent fore-face which should balance with the skull. No indication of coarseness. From front: skull appears flat, tapering forward towards the muzzle. Muzzle itself strong rather than fine and delicate, and in proportion to the head as a whole ; cheeks and lips small, taut and closely adherent to each other. Teeth in perfect alignment and apposition. From side: Well balanced with only a slight drop to the muzzle, which should be parallel to the top of the skull. Nose black only (with the exception of chocolates, which may have a selfcoloured nose). Eyes full, slightly oval, almost round, clear, bright and dark, even to a true black ; set wide apart and fitted well into the sockets. Ears well set and firmly placed, upstanding (when cropped, pointed, and carried erect in balance with the head).

Faults: Too large or too small for the body, too coarse or too refined, pinched and weak in fore-face, domed in skull, too flat and lacking in chiselling, giving a vapid expression. Nose any colour other than black (with the exception of chocolates which may have a self-coloured nose). Jaws and teeth overshot or undershot. Eyes too round and full, too large, bulging, too deep-set or set too far apart ; or too small, set too close (pig eyes). Light-coloured eyes not desirable. Ears poorly placed, low-set hanging ears (lacking in cartilage) which detract from head conformation. (Poorly cropped ears if set on the head properly and having sufficient cartilage should not detract from head points, as this would be a man-made fault and automatically would detract from general appearance.)

Neck: Proportioned to head and body. Slightly arched, gracefully curved, clean and firm, blending into shoulders, length well balanced, muscular and free from a suggestion of dewlap or throatiness.

Faults: Too straight or too curved ; too thick or too thin ; too long or short ; knotty muscles ; loose, flabby or wrinkled skin.

Faults: Shoulders too straight, too loose, or too short and overloaded with muscles. Forelegs bowed or crooked, weak pasterns, feet turning in or out, loose elbows.

Body: From top: Compact, slightly wedge-shaped, muscular with well-sprung ribs. From side: Back level or slightly sloping towards the rear. Length of males equal height at withers. Females may be slightly longer. Forechest well developed and full, moderately broad. Depth of brisket, the base line of which is level with the points of the elbows; short and strong in loin with belly moderately tucked up to denote grace in structural form. From rear: High tail-set; strong, sturdy upper shanks, with croup slope at about 30 degrees; vent opening not barrelled.

Faults: From top: too long, too short, too barrelled, lacking in body development. From side: too long, too thin, too short or too fat, hips higher or considerably lower than the withers, lacking depth of chest, too full in loin, sway back, roach back or wry back. Forechest and spring of rib too narrow (or too shallow and underdeveloped). From rear: quarters too wide or too close to each other, overdeveloped, barrelled vent, underdeveloped vent, too sloping croup, tail-set low.

Hindquarters: Well-knit muscular quarters set wide enough apart to fit into a properly balanced body. All adjacent bones should appear well angulated with well-muscled thighs or upper shanks, with clearly well-defined stifles, hocks short, set well apart turning neither in nor out, while at rest should stand perpendicular to the ground and upper shanks, lower shanks and hocks parallel to each other. Feet cat-like, toes strong, well arched and closely knit with deep pads and thick blunt nails.

Disqualifications: Thumb marks or any area of white on feet or fore-chest exceeding 1/2 inch (1 cm) in its longest dimension. A dog of either sex measuring under 10 inches (25 cm) or over 12-1/2 inches (32 cm) should be disqualified.