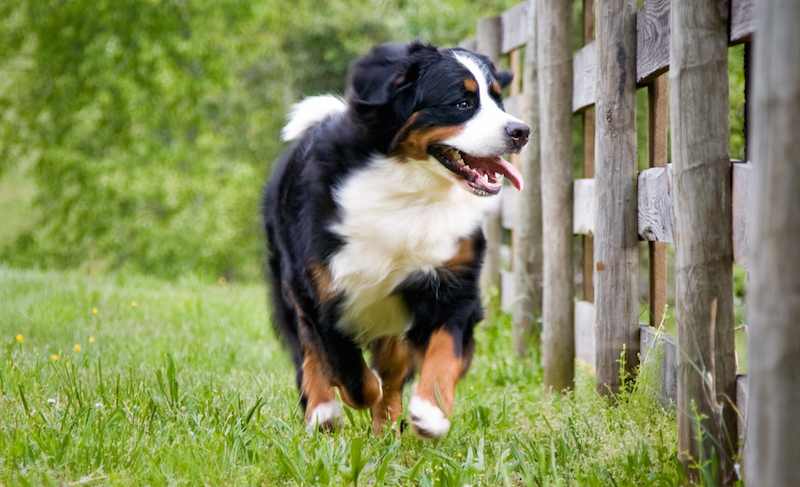 The Bernese Mountain Dog (Bouvier Bernois) takes its name from the Canton of Bern in Switzerland, its native land. It is one of the four Swiss tri-colour dog breeds known by the collective name Sennenhunde, the only one of the four with a long coat. The Bernese Mountain Dog and his ancestors lived for many generations as farm dogs with occasional use as draft dogs. From this background developed a hardy, natural, good-natured working dog breed that today is known principally as a faithful family companion.

General Appearance: The Bouvier Bernois is a large, sturdy, well balanced working dog of substantial bone. Square in appearance from withers to ground and withers to tail set. Heavy-coated with distinctive characteristic markings. In comparison with the opposite sex, dogs appear masculine, bitches feminine without loss of type. 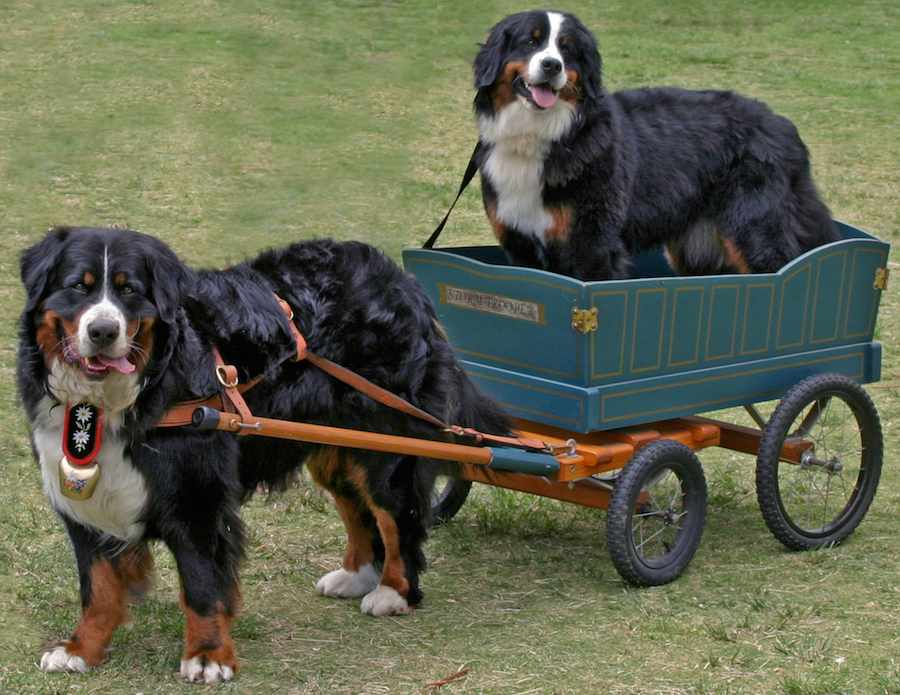 Bouvier Bernois Temperament: The Bernese Mountain Dog temperament is one of the breed’s strongest assets. Consistent, dependable, with a strong desire to please. Self-confident, alert, good natured. Attached and loyal to human family; may be aloof or suspicious with strangers, but never sharp or shy. A Bernese Mountain Dog must stand for examination when required to do so by its handler.

Coat and Colour: The adult Bernese Mountain Dog’s coat is thick, moderately long, possibly with a slight wave but never curly. It has a bright natural sheen. In texture it is soft rather than harsh, but is weather resistant, easily kept and resists matting. There is a soft, seasonal undercoat. Compulsory markings: Jet-black ground colour. Rich russet markings (dark reddish brown is most favoured) appear on the cheeks, in a spot over each eye, in a patch above each foreleg, and on all four legs between the black of the upper leg and the white of the feet. Clean white markings as follows: On chest extending uninterrupted to under chin; also a slight to middle-sized blaze extending into a muzzle band which is not so wide as to obliterate the russet on the cheek (and which preferably does not extend past the corners of the mouth). Preferable markings: White feet with white reaching at the highest the pasterns and a white tip of tail. Markings should be symmetrical. Too little white is preferable to too much.

Head: Skull: Flat and broad with a slight furrow; defined, but not exaggerated stop. Muzzle strong and straight; roughly square proportions, tapering only very slightly. Muzzle is slightly shorter than length of skull. Lips are fairly clean and tight; black in colour. Teeth: jaw is strong with good teeth meeting in a scissors bite. Dentition should be complete. Nostrils well open and black in colour. Eyes dark brown in colour, almond shaped, and well set apart; tight eyelids. Expression is intelligent, animated and gentle. Ears middle-sized, triangular in shape with rounded tip. Set above eye level high on side of head; hanging close to the head in repose, brought forward at the base when alert.

Body: Approximately square from withers to ground and withers to tail set. The body is sturdy. The chest is broad, with good depth of brisket reaching at least to the elbows; ribs are well sprung. The back is firm and level. Loins are strong and muscular. The croup is broad, well muscled.

Forequarters: Shoulders are well muscled, flat lying and well laid back. Forelegs are straight with substantial bone; parallel stance. Elbows are well under shoulders. Pasterns are slightly sloping, but not weak. Feet are proportionate in size, round and compact. Front dew claw removal not required presence or lack thereof must not influence the judgement of the dog.

Hindquarters: The hindquarters are powerful, with broad, well-muscled thighs and substantial bone. Stifles are well angulated. Hocks are well let down, turning neither in nor out. Pasterns are wide and straight, standing parallel. Feet are proportionate in size, round and compact. Rear dew claw removal desirable but not required, presence or lack thereof must not influence the judgement of the dog.

Tail: Bushy, hanging straight, with bone reaching to the hock joint or slightly below. Carried low in repose, higher when the dog is in motion or alert. An upward arc is permissible, but the tail should never curl over itself or be carried over the back.

Gait: The natural travelling gait of the breed is a slow trot, but it is capable of speed and agility. Good reach in front. Strong drive from the rear, flexing well at the stifles. The level backline is maintained; there is no wasted action. Front and rear feet of each side travel in lines parallel to direction of motion, converging towards a centre line at increased speeds. Faults: A fault is any deviation from the standard, to be weighed in accordance with the degree of deviation. In addition and in particular:

Major faults: ectropion or entropion; undershot or overshot mouth; tail rolled over back.