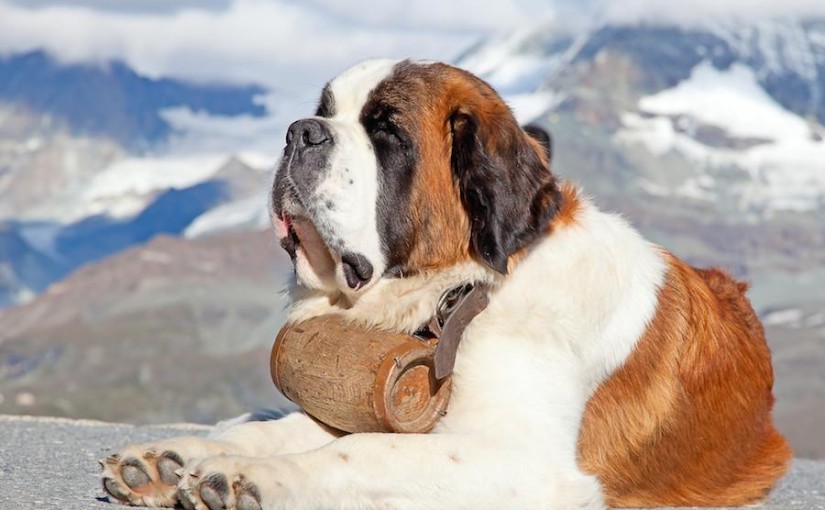 The Saint Bernard originated in Switzerland from dogs brought back from Asia by conquering Roman armies. They have been connected with rescue work in the Great Saint Bernard Pass in the Swiss Alps for several centuries. Credited with saving more than 2,500 travellers lost in the snow, this dog breed was named for the Hospice du Grand Saint Bernard in Switzerland, where the monks have bred these large dogs since the 17th century. It seems probable that the Saint Bernard developed from the heavy mastiffs brought to Switzerland by the Roman armies, which then bred with local dogs. Because of the isolation of the Hospice, the original stock was undoubtedly inbred and produced the distinctive ‘Hospice Dog.’ When the monks took the dogs along with them, they quickly learned the canines’ sense of smell was invaluable in locating lost travellers overcome in the snow. Thus began a working relationship that endured for centuries. Up until 1830, all Saint Bernards were short-haired, but when the breed was struck with disaster and distemper, the Newfoundland was crossed with the Hospice Dog to give size and strength to the breed. The cross also produced the first long-haired Saints.

Good-natured and kindly, the Saint Bernard is a relatively easygoing dog with a gentle nature. The breed is especially understanding and lovable with children. This giant big dog breed tends to take life easy but it requires lots of room, both indoors and out, plus regular daily exercise.

General Appearance: Powerful, proportionately tall figure, strong and muscular in every part, with powerful head and most intelligent expression. In Saint Bernard dogs with a dark mask the expression appears more stern, but never ill-natured. Coat and Colour: Coat very dense, short-haired Saint Bernard (stockhaarig), lying smooth, tough, without however feeling rough to the touch. The thighs are slightly bushy. The tail at the root has longer and denser hair which gradually becomes shorter towards the tip. The tail appears bushy, not forming a flag. Colour white with red or red with white, the red in its various shades; brindle patches with white markings. The colours red and brown-yellow are of entirely equal value. Necessary markings are: white chest, feet and tip of tail, nose band, color or spot on the nape; the latter and a blaze are very desirable. Never of one colour or without white. Faulty are all other colours, except the favourite dark shadings on the head (mask) and ears. One distinguishes between mantle dogs and splash-coated dogs.

Head: Like the whole body, very powerful and imposing. Skull: the massive skull is wide, slightly arched and the sides slope in a gentle curve into the very strongly developed, high cheek bones. Occiput only moderately developed. The supra orbital ridge is very strongly developed and forms nearly a right angle with the horizontal axis of the head. Deeply imbedded between the eyes and starting at the root of the muzzle, a furrow runs over the whole skull. It is strongly marked in the first half, gradually disappearing towards the base of the occiput. The lines at the sides of the head diverge considerably from the outer corner of the eyes towards the back of the head. The skin of the forehead, above the eyes, forms rather noticeable wrinkles, more or less pronounced, which converge toward the furrow. Especially when the Saint Bernard dog is in action, the wrinkles are more visible without in the least giving the impression of morosity. Too strongly developed wrinkles are not desired. The slope from the skull to the muzzle is sudden and rather steep. Muzzle: The muzzle is short, does not taper, and the vertical depth at the root of the muzzle must be greater than the length of the muzzle. The bridge of the muzzle is not arched, but straight; in some dogs, occasionally, slightly broken. A rather wide, well marked, shallow furrow runs from the root of the muzzle over the entire bridge of the muzzle to the nose. Nose: Very substantial, broad, with wide open nostrils and, like the lips, always black. Mouth: The flews of the upper jaw are strongly developed, not sharply cut, but turning in a beautiful curve into the lower edge, and slightly overhanging. The flews of the lower jaw must not be deeply pendant. The teeth should be sound and strong and should meet in either a scissors or an even bite, the scissors bite being preferable. The undershot bite although sometimes found with good specimens is not desirable. The overshot bite is a fault. A black roof to the mouth is desirable. Eyes set more to the front than the sides, are of medium size, dark brown, with intelligent, friendly expression, set moderately deep. The lower eyelids, as a rule, do not close completely and, if that is the case, form an angular wrinkle towards the inner corner of the eye. Eyelids which are too deeply pendant and show conspicuously the lachrymal glands, or a very red, thick haw, and eyes that are too light, are objectionable. Ears of medium size, rather high set, with very strongly developed burr (Muschel) at the base. They stand slightly away from the head at the base, then drop with a sharp bend to the side and cling to the head without a turn. The flap is tender and forms a rounded triangle, slightly elongated towards the point, the front edge lying firmly to the head, whereas the back edge may stand somewhat away from the head, especially when the dog is at attention. Lightly set ears, which at the base immediately cling to the head, give it an oval and too little marked exterior, whereas a strongly developed base gives the skull a squarer, broader and much more expressive appearance.

Neck: Set high, very strong and in action, is carried erect. Otherwise horizontally or slightly downward. The junction of head and neck is distinctly marked by an indentation. The nape of the neck is very muscular and rounded at the sides which makes the neck appear rather short. The dewlap of throat and neck is well pronounced; too strong development, however, is not desirable.

Body: The withers are strongly pronounced. The back very broad, perfectly straight as far as the haunches, from there gently sloping to the rump, and merging imperceptibly into the root of the tail. Chest very well arched, moderately deep, not reaching below the elbows. Belly distinctly set off from the very powerful loin section, only a little drawn up.

Hindquarters: Well developed. Legs very muscular. Hocks of moderate angulation. Dewclaws are not desired; if present, they must not obstruct gait. Feet broad, with strong toes, moderately closed, and with rather high knuckles. The so-called dewclaws which sometimes occur on the inside of the hind legs are imperfectly developed toes. They are of no use to the dog and are not taken into consideration in judging.

Tail: Starting broad and powerful, directly from the rump is long, very heavy, ending in a powerful tip. In repose, it hangs straight down, turning gently upwards in the lower third only, which is not considered a fault. In a great many specimens, the tail is carried with the end slightly bent and therefore hangs down in the shape of an “f ”. In action, all dogs carry the tail more or less turned upwards. However, it may not be carried too erect or by any means rolled over the back. A slight curling of the tip is sooner admissible.

Faults: Considered as faults are all deviations from the standards, as for instance a sway back, and a disproportionately long back, hocks too much bent, straight hindquarters, upward growing hair in spaces between the toes, out at elbows, cow-hocks, and weak pasterns. Long-Haired: The Long-Haired Saint Bernard variety completely resembles the Short-Haired Saint Bernard variety except for the coat which is not short-haired (stockhaarig) but of medium length, plain to slightly wavy, never rolled or curly and not shaggy either. Usually, on the back, especially from the region of the haunches to the rump, the hair is more wavy, a condition, by the way, that is slightly indicated in the short-haired dogs. The tail is bushy dense with hair of moderate length. Rolled or curly hair on the tail is not desirable. A tail with parted hair, or a flag tail, is faulty. Face and ears are covered with short and soft hair; longer hair at the base of the ear is permissible. Forelegs only slightly feathered; thighs very bushy.