Siberian Husky dog breed was developed centuries ago by the Chukchis of Northern Siberia. The Chukchis, a nomadic people, utilized their dogs in many ways – companions for their children, hunters for their food and as their mode of transportation. Siberian Huskies were brought to Alaska in 1909 for racing, proving themselves to be hardy dogs with speed and endurance.

The nomadic Chukchi people used a medium-sized working dog to pull their sleds and herd reindeer. In their isolated region, with no other dogs to crossbreed, the Chukchis mated the best of their dogs to each other and the type bred pure and true for over 3,000 years. Noted for its ability to pull light loads over great distances at moderate speeds, the breed caught the attention of a fur trader and explorer by the name of Olaf Swenson, who brought the first of the breed to the U.S. shortly after the turn of the last century, Siberians raced in the All-Alaska Sweepstakes for the first time. A team of Siberians driven by a Norwegian, Leonhard Seppala, won the big Alaska race in 1915, ’16 and ’17. In the winter of 1925, Seppala drove one of several teams, which, running in relay, gained international prominence as the heroes that delivered serum to avert a diphtheria epidemic in Nome, Alaska. The serum run served to bring the breed to the attention of the public and a personal-appearance tour by Seppala and his team made friends for the breed from coast to coast. General Appearance: The Siberian Husky is a medium-sized working dog, light on his feet, free and graceful in action. He has an inbred desire to run and an independent spirit. His well-furred body, erect ears, and brush tail suggest his northern heritage. He performs his original function in harness most capably, carrying a light load at moderate speed over great distances. His body proportions and form reflect this basic balance of power, speed, endurance and general athletic abilities. The males of the Siberian Husky breed are masculine but never coarse. The bitches are feminine but without weakness of structure. In dogs and bitches, the bone must be medium with firm and well developed muscles. The coat is soft textured. Siberian Husky Temperament: The characteristic temperament of the Siberian Husky is friendly and gentle, but also alert and energetic. As adults, the breed tends to be aloof and independent. His intelligence, natural workability and eager disposition make him an agreeable companion and willing worker, especially as a sled dog. He does not display the possessive qualities of a guard dog.

Coat and Colour: The Siberian Husky has a thick, soft, double-coat consisting of a soft, dense, downy undercoat of fur next to the skin, and an outer coat of soft, smooth-texture guard hairs, giving a smooth, full-furred appearance and a clean cut outline. It should be noted that the absence of undercoat during the shedding season is normal. Trimming of the fur around the feet to present a neater appearance is permissible. Trimming the fur on any other part of the body is not to be condoned and should be severely penalized. All colours (solids and blended shades) and pure white are allowed and all markings. A large variety of markings are found in the Siberian Husky, especially around the head. 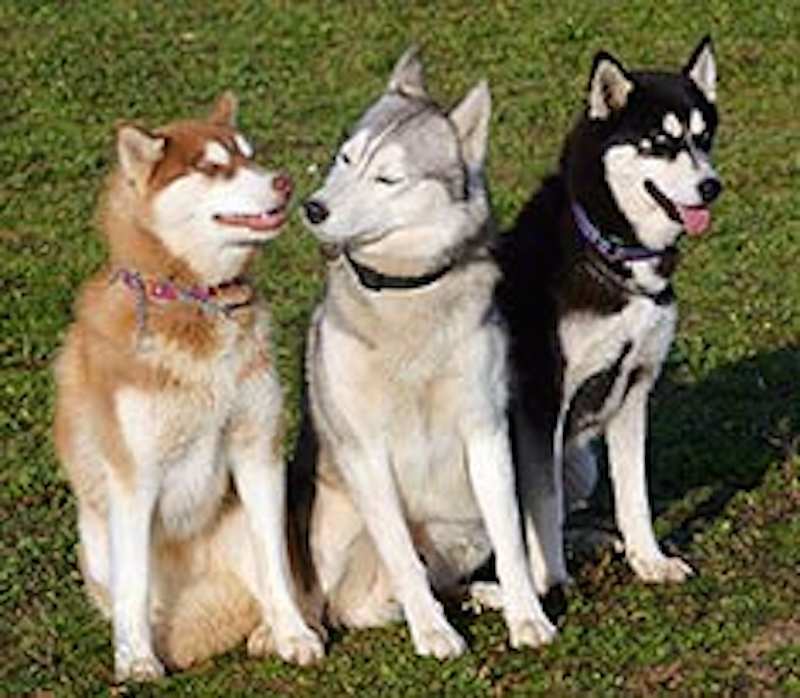 Head: Skull of medium size and in proportion to the body; slightly rounded on the top and tapering from the widest point to the eyes. Muzzle of medium length, that is, the distance from the tip of the nose to the stop is equal to the distance from the stop to the occiput. The stop is well defined and the bridge of the nose is straight from the stop to the tip. In profile, the skull and the muzzle are on parallel planes. The muzzle is of medium width, tapering gradually to the nose, with the tip neither pointed or square. The lips are dark pigmented and close fitting. Eyes are shades of brown or blue, one of each or parti-coloured; all are equally acceptable. The eyes should be almond shaped, moderately spaced and set slightly obliquely with well fitting lids. The eye expression is keen, friendly, interested and even mischievous. Ears of medium size, erect, close fitting, set high on the head. They are thick and well furred including hair on the inside. This helps reduce heat loss during the winter months. The ears are slightly arched at the back and strongly erect, with slightly round tips pointing straight up. Teeth Scissor bite, strong and powerful jaws with a full compliment of evenly set teeth (42).

Pigmentation: The nose, eye rims and lips must be black in gray, black or tan coloured dogs; liver in copper (red) coloured dogs. In white dogs, they may be flesh coloured but it is not preferred. The pink-streaked “snow nose” is acceptable. This normally colours back in the summer months.

Neck: Medium length. When dog is standing, the neck is arched and carried proudly erect. When gaiting, the neck is extended on an even plane with the topline, so that the head is carried slightly forward.

Body: Topline The back is of medium length, neither cobby nor slack from excessive length and is straight and strong with a visually level topline from withers to croup. Chest Deep and strong, but not too broad, with the deepest point just behind and level with the elbows. There is a medium spring of ribs from the spine, then flattens on the sides near the elbows to allow for freedom of gaiting action. Loin is taut and lean, narrower than the rib cage, with a slight tuck up. The croup slopes away from the spine at a slight angle, but never steeply, as this would restrict the rearward thrust of the hindlegs. In profile, the length of the body from the point of the sternum to the rear point of the croup (pin bone) is slightly longer than the height of the body from the ground to the top of the withers.

Feet: Oblong in shape, the paws are medium in size and well-furred between the toes. The pads are tough and thickly cushioned. The Siberian’s foot is like that of other Arctic breeds, it is a “snowshoe foot”, somewhat webbed between the toes. Good feet are very important and should be examined in the ring. The paws should turn neither in nor out.

Forelegs: Straight and well muscled with medium bone. When viewed from the side, pasterns should be slightly slanted with the pastern joint strong but flexible. When viewed from the front, the legs are moderately spaced, parallel and straight, with elbows close to the body, turned neither in nor out. Length of leg from elbow to the ground is slightly more than the distance from the elbow to the top of the withers. Bone lengths for the front assembly (i.e., scapula and humerus) and the rear assembly (i.e. pelvis and femur) are all equal in length. The hock assembly is upright, of moderate height, with a well defined hock point. Rear dewclaws are to be removed.

Tail: A well furred brush carried up and in a sickle curve when gaiting or at attention, or trailing out behind when gaiting or working, and down when standing relaxed. The tail is situated on or just below the level of the topline. When carried up, the tail does not curl to either side of the body nor does it snap flat along the back. The tail-bone reaches the top of the hock when let down.

Gait: The Siberian Husky’s characteristic gait is smooth and seemingly effortless. When in the show ring, he should be gaited on a loose lead at a moderately fast trot. The dog’s head should move forward and extend in a line with his topline. He should show good reach in the forequarters and good drive in the hindquarters. When moving at a walk, the Siberian Husky may not single track, but as the gait speed increases the legs converge until the pads are falling on a line directly under the longitudinal center of the body, single tracking. The topline remains firm and level.

Faults: Long, rough or shaggy coat, texture too harsh or too silky, trimming of the coat except as written. A snapped-over the back tail set, tightly curled tail. Head clumsy or heavy, skull too wide between the ears, skull too small for the body, too refined or snipy. Low set ears (too wide-set for skull), downed ears (bent over as in not erect), flat ears (not slightly arched), extra large ears that are out of proportion to the head. Round eyes, set either too close or too wide, eyes set without obliqueness. Muzzle too snipey, too coarse (bulky), too long or too short (out of proportion), loose fitting lips. Any bite other than scissor. Lack of pigmentation on the nose, lips or eye rims. Chest too broad, “barrel ribs”, ribs too flat from the spine as in “slab-sided”. Straight or loose shoulders, perpendicular upper arm, unequal bone lengths, less than 30 degrees shoulder angulation. Neck too short or too long; not extended forward when gaiting. Short, weak or slack back; excessively long back, roached back, sloping topline. Weak (soft) patterns; too heavy boned; too narrow or too wide in front; out at the elbows; legs proportionately too short. Unequal bone lengths (pelvis and femur), straight stifles, cow-hocks, rear too narrow (weak) or too wide. Soft or splayed feet, feet too large or clumsy, or too small and delicate, feet turned in or out, or without the characteristic webbing between the toes. Short, prancing or choppy gait, lack of reach and/or drive, lumbering or rolling gait, crossing over in front or rear, crabbing, elbows turning in or out, stifles turning out, hocks turning in, wide tracking. Aggressive behaviour or extreme shyness should both be severely penalized.