Rottweiler. A vicious rottweiler mauled his owner to death and spent more than an hour eating his body, as police tried in vain to capture the animal.

The black dog, named Tiger, attacked his owner, by locking its jaws around his body and choked him to death. 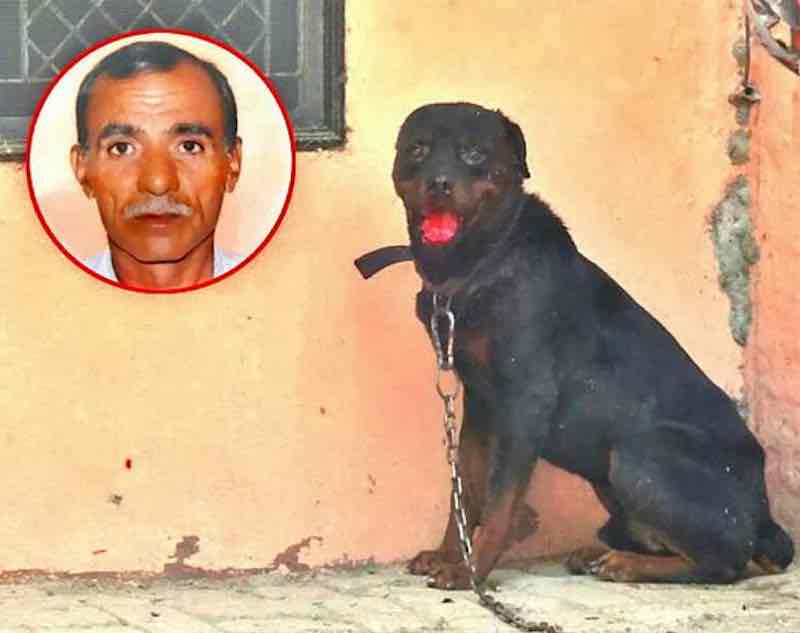 Killer dog mauls owner to death then feasts on his flesh as helpless police forced to watch in horror!

Mani Ram, a farm caretaker, had bought the dog to guard his home, but as he went to untie him, Tiger turned and violently ran at him.

According to eye witnesses, the dog didn’t stop there and went on to “maul his face and feast on the flesh from his hands and chest for more than an hour”.

Police arrived and tried to fend off the dog as they desperately attempted to get to Mr Ram’s body.

Footage of the aftermath shows the officers were unable to get near Tiger as Mr Ram’s bloodied body lie in the courtyard of the farm in Panipat, Haryana, India.

The dog stood guard by the body and ran away as police and locals tried to corner it.

People armed with sticks and rocks tried to get the dog away from Mr Ram.

Even after police finally removed the body, it took them four hours to catch the three-year-old dog which is now in police custody.

Deputy superintendent of police Jagdeep Duhan said: “Nobody wanted to go near the dog because of its aggressive behavior.”

Mr Ram was a farm laborer and worked as a caretaker. The dog had guarded the farm for three years after he was bought for £180. Mr. Ram arrived at work at 5.30am and untied the dog “as usual” when it attacked, locals said.

But when police arrived at 6am they were unable to intervene for fear of being bitten.

Superintendent of Police Chander Mohan said: “We are in the process of getting the beast medically examined about its general condition.

“So far as the victim’s body is concerned, initially we had sent it to Panipat Civil Hospital.