The Siberian Husky has a sweet nature and is a breed that is well suited for the family, but is generally very hyper. They do not make a good guard dog. They are very friendly, and generally, get along well with children and other dogs. Gentle in character with a determined look, they are very people oriented dogs. Males have a tendency to roam and need to be kept in a fenced in area. If they get out it may be impossible to catch them on foot. Siberian Huskies are long-lived, active, and outgoing with friends and family. They tend to be independent, not being very obedient, but are not a one-person dog. They enjoy all types of people. A member of the Spitz family, the Siberian Husky is strong and has the ability to moderate loads over long distances and rough terrain. They have medium length, straight and thick fur and they can have many different colors in the eyes. They can be blue, brown, one of each or even particolored. The nose color depends on the coat color, which can be any color, most often with markings on the head with the underbelly and face a lighter color than the rest. Siberian Huskies are not only magnificent to look at, but magnificent in personality as well.

The Alaskan Malamute, one of the oldest Arctic sled dogs, is a powerful and substantially built dog with a deep chest and strong, well-muscled body. The Malamute stands well over the pads, and this stance gives the appearance of much activity and a proud carriage, with head erect and eyes alert showing interest and curiosity. The head is broad. Ears are triangular and erect when alerted. The muzzle is bulky, only slight diminishing in width from root to nose. The muzzle is not pointed or long, yet not stubby. The coat is thick with a coarse guard coat of sufficient length to protect a wooly undercoat. Malamutes are of various colors. Face markings are a distinguishing feature. These consist of a cap over the head, the face either all white or marked with a bar and/or mask. The tail is well furred, carried over the back, and has the appearance of a waving plume. The Malamute must be a heavy boned dog with sound legs, good feet, deep chest and powerful shoulders, and have all of the other physical attributes necessary for the efficient performance of his job. The gait must be steady, balanced, tireless and totally efficient. The Malamute is structured for strength and endurance. The Alaskan Malamute is an affectionate, friendly dog, not a “one man” dog. He is a loyal, devoted companion, playful in invitation, but generally impressive by his dignity after maturity. Malamutes will happily pull a young child in a wagon or sled. They have strong legs and a sturdy build. They have great endurance, with their large sized bodies. 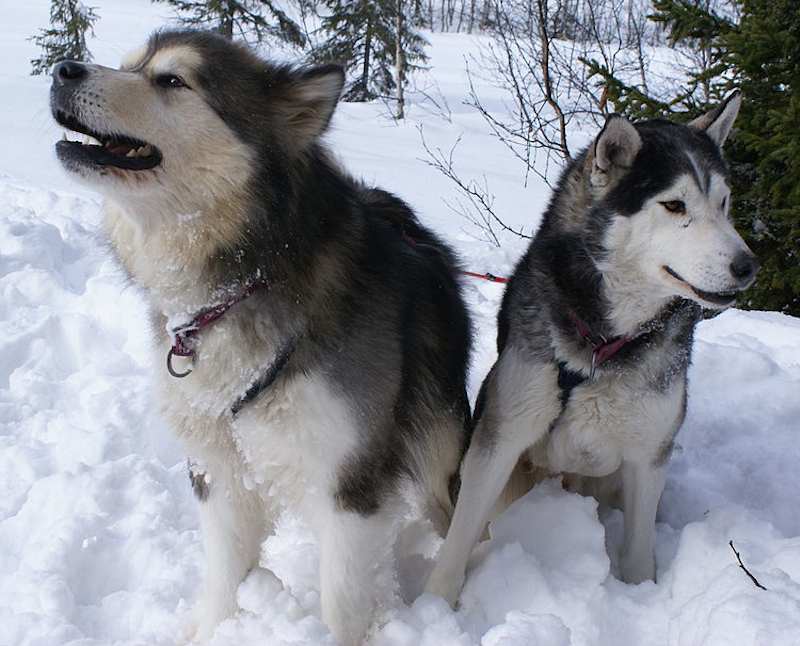 The Alaskan Malamute sheds more. Shedding is a normal process to naturally lose old or damaged hair. Some owners might not find it desirable to find dog hair in their cars and homes.

The Siberian Husky is better in watching out for intruders. It will bark and alert its owners of an intruder’s presence. Having a reliable companion with this ability can give more peace of mind. However, the dog will likely not act to defend and protect its owner and family.

The Alaskan Malamute has better adaptability. It can better respond and alter itself to its environment.

The Alaskan Malamute is better for a family with kids. It can grow up with them and become a great family pet.

The term Huskies generally is referring to a mixed breed animal that would not resemble the characteristics of the Siberian Husky or Malamute. The term Alaskan Husky generally refers to a cross between a Siberian Husky & Alaskan Malamute. Seppalas is a term used for a line of sled dogs noted for explosive speed – some suggest they are Siberian Huskies.