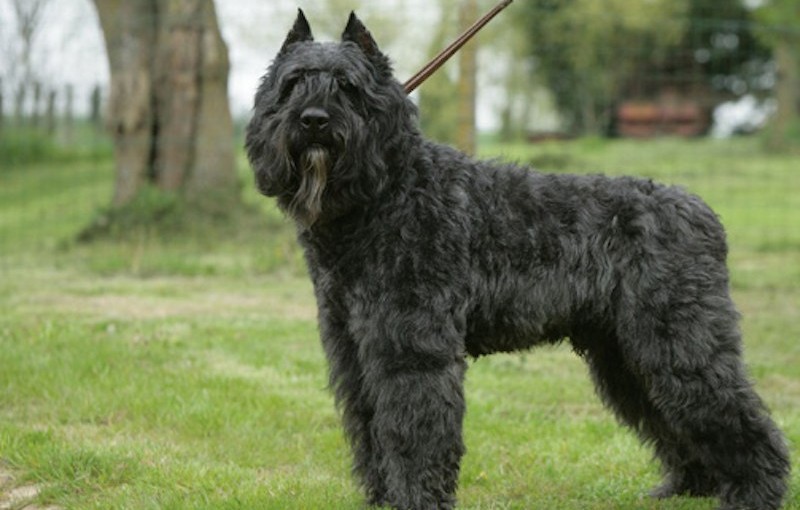 Bouvier des Flandres dog breed originated in the the agricultural plain of Flanders, both France and Belgium (there are no boundaries separating these two countries). In the beginning, the Bouvier was used to herd cattle; for draught and butter churning. When the breed was first exhibited in Belgium in 1910, there were four varieties. Two years later, purists founded a group to standardize the dog breed into a single variety. World War I dealt harshly with the Bouvier but a few breeders succeeded in keeping their dogs. The dog breed distinguished itself during World War II for carrying messages under fire and searching out the wounded.

Now, the Bouvier des Flandres is used as guard for home or farm, for defense work or police work. His great physical and moral aptitudes, his excellent nose, initiative and intelligence make him an excellent tracker and gamekeeper’s aid.

Bouvier des Flandres Temperament: The Bouvier is fond of human companionship and does well in most environments. He is an intelligent dog with a steady disposition. Though spirited and bold, he is usually well behaved. Bouvier is even-tempered, never shy and not overly aggressive. He is calm, rational and prudently bold, never pretty in attitude or behavior. With those he knows well he is outgoing and almost boisterous. Shy dogs that back away under normal situations and overly aggressive dogs that show aggression without reason should be severely penalized. Coat: The coat is very full. The top coat plus the dense undercoat make a perfect wrap adapted to abrupt climatic changes characteristic of the breed’s country of origin. It must be rough to the touch, harsh and dry neither too long nor too short (about 2-1/2 inches/6.3 cm), slightly tousled without ever being woolly or curly. On the head the coat is shorter and almost shaven on the outside of the ear, but the inside is protected by fairly long hair. On the top of the back, the coat is harsh and dry; it becomes shorter on the lower legs, while still harsh. A flat coat is to be avoided since it indicates a lack of undercoat. Soft, woolly, silky, or too long or too short a coat are considered faults. Undercoat – wadding made of fine and coarse hairs grows under the overcoat and forms with it a waterproof mantle. Lack of undercoat is a fault. Colours: The coat of the Bouvier des Flandres is fawn or grey often brindle or dark grey, or black. Light-coloured coats (white, cream) and washed-out colours or chocolate brown with white spots are not desirable. A white star on the chest is allowed. Head: Massive, appearing more so because of his beard and mustache, it is well proportioned to his body and size. To feel, it is finely chiseled. Skull well developed and flat, longer than its width. The top lines of the skull and muzzle are parallel. The proportions of the skull to the muzzle are 3 to 2. Stop is barely perceptible, more apparent than real because of the raised eyebrows. Muzzle wide, powerful, bony, straight in upper profile, diminishing toward the nose but never pointed. The muzzle is shorter than the skull – in proportion of 2 to 3 and the circumference just below the eyes is about equal to the length of the head. Cheeks flat and dry. Nose – This is the continuation of the muzzle, it is slightly convex at its extremity – must be well opened nostrils. Spotted, pink, brown or butterfly are faults. Mouth – Jaws should be powerful and of equal length; teeth strong, white and healthy. The upper incisors must meet the lower ones like the blades of scissors. Overshot or undershot are faults. Mustache and Beard – Fully dry, shorter and harsher on top of muzzle. The upper lip has a mustache and the chin has a full, harsh beard which gives the gruff expression so characteristic of the breed. Eyes – Bold and energetic, neither prominent nor sunken. In shape slightly oval on a horizontal plane. The colour should be as dark as possible in keeping with the colour of the coat. Light in colour or haggard in expression should be severely faulted. Eyelids – Black without a trace of deficient pigmentation. No haw should be visible. Eyebrows – These are made of upstanding hair which accentuate the arch of the eyebrows without ever hiding the eyes. Ears – Cropped in a triangle, they are carried well up; attached high and very mobile. It is recommended that the size and shape should match the size of the head. Uncropped ears are allowed.

Forearms: Seen from the profile or front they remain straight, parallel to each other, perpendicular to the ground. They should be well muscled and of powerful bony structure. Elbows – Close to the body and parallel. Elbows out or too close are faults. In action they must remain parallel to median line of the body. Carpus – (Knee) in plumb with forearms, except for accessory carpus at back. Strong and heavy bone. Pastern – (Metacarpal) of strong bony structure, very slightly inclined forwards. Feet – Short, round and compact. The toes should be close and well arched. Nails – strong and black, Thick and hard soles.

Body: Powerful, cobby and short. The length of the point of the shoulder to ischium should be about equal to the height at the withers. The ischium is the rear point of the rump. The chest should reach to level of elbows and never be cylindrical, though the ribs are well sprung. The depth, i.e., the distance between the sternum and the last rib must be great – about 7/10th of the height at the wither. The first ribs are slightly curved; the others are well sprung and well inclined to the rear giving the desired depth of the chest. Flat, too long or overly rounded and short ribs must be greatly penalized. Flank – The flank between the last rib and the haunch must be very short, especially in males. There is very little tuckup. Back – Short, wide, muscled and firm – showing no weakness but remaining flexible. Long body or sway-back are faults. Loin – Short, wide and well muscled – must remain flexible but without weakness. Croup or Rump – Must follow as closely as possible the horizontal line of the back and follow (merge) smoothly into the curve of the rump. It should be wide without excess in the male, more developed (wider) in the female. A descending (steeply tilted) croup is a serious fault.

Hindquarters: Thighs – Wide and well muscled. The direction will be parallel to the median plane of the body. The femurs will be neither too straight nor too inclined. The buttock will be well let down with good, firm breeches. The kneecap or patella, is situated on an imaginary line from the iliac crest to the ground. Legs – Moderately long, neither too straight nor too inclined. Powerful and pronounced musculation is demanded. Rear legs must move in the same plane as front legs. No dewclaws. Hocks – Rather close to the ground, broad, well muscled and stretched. Seen from back they will be straight and parallel in the stand position. In action they remain parallel. Feet – Round, strong toes; close and arched. Strong, black nails and thick, hard soles.

Tail: To be docked to 2nd or 3rd vertebrae. The tail should be an extension of the spine and carried high during movement. Some Bouviers are born with short tails and should not be faulted for this.

Gait: The Bouvier des Flandres as a whole must be harmoniously proportioned to permit a gait free, proud and bold. The walk and trot are habitual gaits, though hambling and pacing are also employed. A Bouvier will single track at a trot.