Briard is an ancient French herding dog which was also utilised as a cart dog, war sentinel and medic dog. His abilities at finding wounded soldiers gave rise to the saying that if a Briard passed a wounded soldier by, he was too near death to save. The Briard is still employed as a herding dog in France.

General Appearance: A hardy dog, of vigorous movement. The Briard offers an image of great beauty and strength without heaviness or clumsiness. Well supported by powerful and muscular legs, the breed is an alert, supple and well proportioned working dog. Dogs should look masculine and bitches feminine. Briard Temperament: The Briard possesses a balanced temperament that is neither aggressive nor timid. He forms a tight bond with his owners and is sometimes aloof with strangers.

Size: 61 cm to 68.5 cm for males. 56 cm to 65 cm for females. The length of the body should be slightly greater (3-5 cm) than the height at the withers. The length of the Briard is measured from the point of the shoulder to the point of the buttocks. The Briard should not be cobby, nor square. Puppies under the age of one (1) year may be below the minimum. Disqualification for adult males under 61cm or over 68.5cm and for adult bitches under 56cm and over 65cm-measurements taken at the withers. Coat: Texture: Coarse, long and dry; slightly wavy, with a light undercoat. The coat texture is likened to that of a coarse-haired goat’s coat. In the adult Briard the coat should be at least 7 cm in length at the shoulder.

Colour: Permissible colours: Black, tawny, charbonné and grey. Uniformity is preferred in all permissible colours. Where there are two or more colours, they must blend so as not to form a demarcation line. In the tawny colours, the colour must be rich, neither pale nor washed out.

A black mask may or may not be present. In Charbonné, (a tawny dog with light charcoaling on shoulders, neck and/or back), the charcoaling overlay should not form a heavy mantle of black over tawny and the charcoaling should appear to mix in with the tawny shades. In Greys, the colour may appear as uniform slate grey with black points at the ears, muzzle and tail, or as grey blending through the black coat. A bicolour (or black and tan pattern), a coat where there is a clear demarcation of a heavy black or grey overlaying tawny, is not acceptable. It is permissible to have a white spot 2.5 cm or less on the forechest. In blacks there may be scattered white “guard” hairs scattered throughout the coat. Too many glints of reddish coat in a black must be faulted. Coats that are extremely washed out as to appear nearly white are disqualified, as are bi-colours.

Head: Head: The head is comprised of two rectangles, one larger (skull) than the other (muzzle). The two rectangles meet in a well defined stop midway between the occiput and the tip of the nose. The head is furnished with hair forming a beard, moustache and eyebrows lightly veiling the eyes. The planes of the skull and muzzle must be parallel. The length of the skull and muzzle are approximately the same, so that viewing the head from the side, it appears as two equal length rectangles with one, the muzzle being slightly lower than the rectangle of the skull. The overall length of the head, measured from the occiput to the tip of the nose is approximately 40% of the dog’s height at the withers. Forehead: Flat, slightly rounded at the edges and broad. Muzzle: Nasal bridges straight and flat. There should be no pendulous flews, nor should the muzzle appear snipey or narrow. Teeth: Teeth strong, white. Scissors bite preferred. Nose: Always square and black; nostrils strong and open. The nose should be large. Eyes: Horizontal, well open, quite large, not slanting, of dark color, with an intelligent and calm expression. The rims of the eyelids, regardless of the colour of the coat should have very black pigmentation. Eyes of any colour other than black or brown are disqualified. Ears: Set high. Must be carried erect, if cropped. If uncropped, rather short and not positioned flat against the head. There is no preference towards cropped or uncropped ears. The length of the uncropped ear must be equal to or slightly less than one half the length of the head, smooth and covered with long hair. When alert the uncropped ears should lift slightly giving a square look to the skull. The cropped ears when alert, tend to move toward each other over the head, with the opening facing forward. Ears should be set on the skull above the eyeline.

Forequarters: Shoulders are well muscled, legs have strong bone and are vertical. Pasterns are slightly inclined. The shoulder should have a good layback. The ideal is 45 degrees of angulation. Forequarter faults are: legs not vertical, loose shoulders, weakness in pasterns, or straight shoulders.

Body: Chest: Wide (the width of the hand between the two elbows), deep and well let down to the elbows. The chest is ovate in shape. There should be a forechest present. Dogs with too narrow a chest, lacking depth, lacking a forechest, with ribs too flat or barrel-chested, should be faulted. Back: Straight and level. The topline should show no sign of dips nor roaching. Croup: Very slightly rounded and inclined approximately 30 degrees. Croups which are too steep or too straight or those which are definitely higher than the withers must be faulted.

Hindquarters: Hindquarters: The rear thighs should be well muscled, the leg bones strong and parallel. The stifle should be well angulated. The pasterns should be slightly inclined. Hindquarter faults are: lack of stifle angulation, weakness in rear pasterns. Hocks: Well-angled with the leg nearing the vertical below the hock joint. The hock is moderately let down with the upper bone joining the lower in a 135 degree angle. Cowhocks and hocks that turn outward should be faulted. When moving the hock should flex open allowing the toes to point to the rear. Sickle hocks, are a severe fault that contributes to an inelegant gait. Feet: Strong, round in shape. The pads of the feet are rounded and hard. The toes are tightly closed, and slightly arched. The nails are always black. The rear feet may turn out slightly to allow for double dewclaws in action, as long as the hock joint remains vertically straight. Foot faults: long, flat or splayed. Toeing in or out in front. Pads without elasticity or that are flat or soft. Any nail colour other than black is disqualified.

Double Dewclaws: Double dewclaws on both back feet. Each double dewclaw must be made up of two bony parts, one in each toe with a nail (the commonly found existence of more than one nail per toe is permitted). They should be placed as near to the ground as possible, assuring a better setting of the foot. Dewclaws may be side by side, without separation as long as each toe in each dewclaw has a bony part. It is permissible to have a missing nail. As long as there are two proper dewclaws, missing nails should not be penalized. There is no penalty for more than two toes in a set of dewclaws. Double dewclaws occasionally appear on the front legs as well. There is no penalty for this. Faults: placed too high (mid-way to the hock). Disqualifications: Single dewclaws; Empty dewclaws; No dewclaws. Lack of two bones, one in each double dewclaw, even if nails are present.

Tail: Whole, well furnished with hair, forming a hook (crochet) at the tip. The tip of the tail should meet the point of the hock, not exceeding more than 5 cm beyond. In repose, the tail hangs straight down until it reaches the crook, viewed as the letter “J“ from the right side of the dog. The crook does not deviate side to side, but remains in line with the tail. In action, the tail is not to be carried over the level of the topline. Faults: not reaching the hock, no crochet, tip tightly curled rather than forming a “J” (when viewed from the dog’s right side), carried above the topline.

Gait: A well-built Briard is the image of a powerful dog with a light and supple movement, appearing to glide, moving as if he doesn’t even touch the ground. This movement is known as “quicksilver”. The dog is able to execute sudden turns and stops as a good herding dog must do to accomplish his work. He possesses good reach and drive with legs converging towards a single track as speed increases. The front and rear feet meet, but do not overlap steps at a trotting gait. Faults: Inelegant, clumsy gait. Sickle hocks, hackney fronts. Habitual pacing.

Faults: Any deviation from the stated ideal is a fault. The seriousness of the fault is equal to the degree of deviation from the ideal. ; Forequarter: legs not vertical, loose shoulders, weakness in pasterns, or straight shoulders ; Chest: Dogs with too narrow a chest, lacking depth, lacking a forechest, with ribs too flat or barrel-chested, should be faulted. ; Croup: Croups which are too steep or too straight or those which are definitely higher than the withers must be faulted ; Hindquarter: lack of stifle angulation, weakness in rear pasterns. Hocks: Cow-hocks and hocks that turn outward should be faulted. Sickle hocks, are a severe fault that contributes to an inelegant gait. ; Foot: long, flat or splayed. Toeing in or out in front. Pads without elasticity or that are flat or soft. ; Dew Claws: placed too high (mid-way to the hock). ; Tail: not reaching the hock, no crochet, tip tightly curled rather than forming a “J” (when viewed from the dog’s right side), carried above the topline. ; Gait: Inelegant, clumsy gait. Sickle hocks, hackney fronts. Habitual pacing.

Disqualifcations: Adult males under 61 cm or over 68.5 cm. Adult females under 56 cm or over 65 cm – measurements taken at the withers. ; Adults with less than 7 cm length of coat at the shoulder. ; White, chestnut, or mahogany brown, and bi-colours. Extremely washed out tawny as to appear nearly white. Spotted coat. White blaze. White spot on chest exceeding 2.5 cm in diameter. ; Nose any colour other than black. ; Eye colour other than black or brown. ; Any artifice to make cropped ears stand erect. ; Cut or docked tail. Any trace of an operation to rectify tail carriage. ; Nail colour other than black. ; Single dewclaws; Empty dewclaws; No dewclaws. Lack of two bones, one in each double dewclaw, even if nails are present. 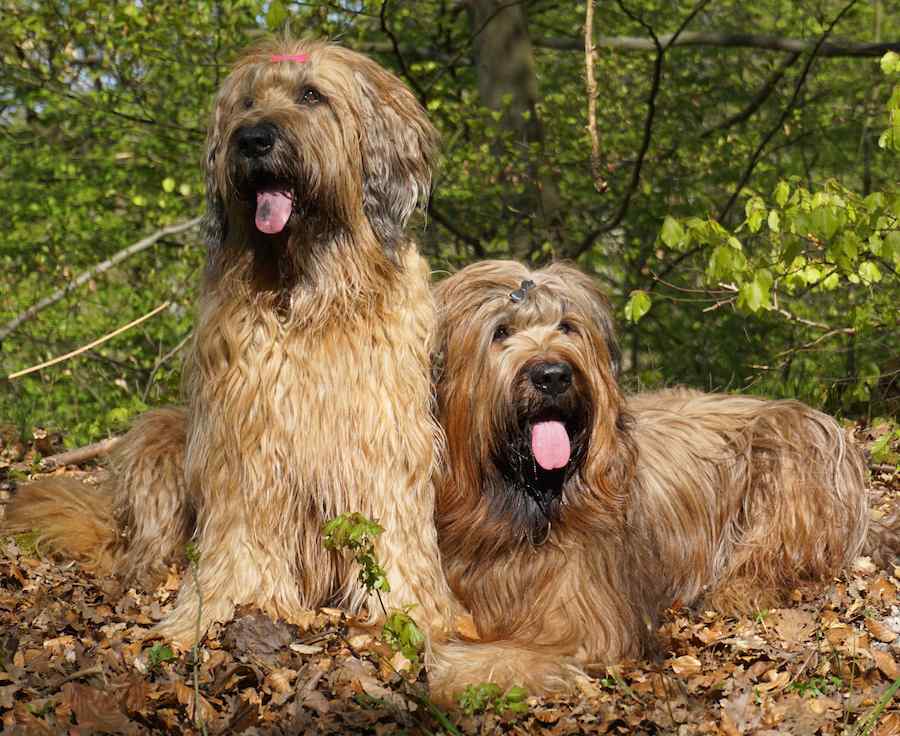