Both breeds of Collie originated in the British Isles. The Rough Collie was originally used as a herding dog, while the Smooth Collie was the drover’s dog.

General Appearance: The Collie is a lithe, strong, responsive, active dog, carrying no useless timber, standing naturally straight and firm. The deep moderately wide chest shows strength, the sloping shoulders and well-bent hocks indicate speed and grace and the face shows high intelligence. The Collie presents an impressive, proud picture of true balance, each part being in harmonious proportion to every other part and to the whole. Except for the technical description that is essential to this Standard and without which no Standard for the guidance of breeders and judges is adequate, it could be stated simply that no part of the Collie ever seems to be out of proportion to any other part. Timidity, frailness, sullenness, viciousness, lack of animation, cumbersome appearance, and lack of overall balance impair the general character.

Coat: There are two varieties of coat allowed, Rough and Smooth.

Rough Collie: The well-fitting, proper textured coat is the crowning glory of the Rough variety of Collie. It is abundant except on the head and legs. The outer coat is straight and harsh to the touch. A soft, open outer coat or a curly outer coat regardless of quantity, is penalized. The undercoat, however, is soft, furry and so close together that it is difficult to see the skin when parted. The coat is very abundant on the mane and frill. The face or mask is smooth. The forelegs are smooth and well feathered to the back of the pasterns. The hind legs are smooth below the hock joints. Any feathering below the hock joints are trimmed for the show ring. The hair on the tail is very profuse and on the hips it is long and bushy. The texture, quantity, and the extent to which the coat “fits the dog” are important points. Smooth Collie: The coat is short, hard, dense and flat. The texture is strong, and the soft furry undercoat is abundant. 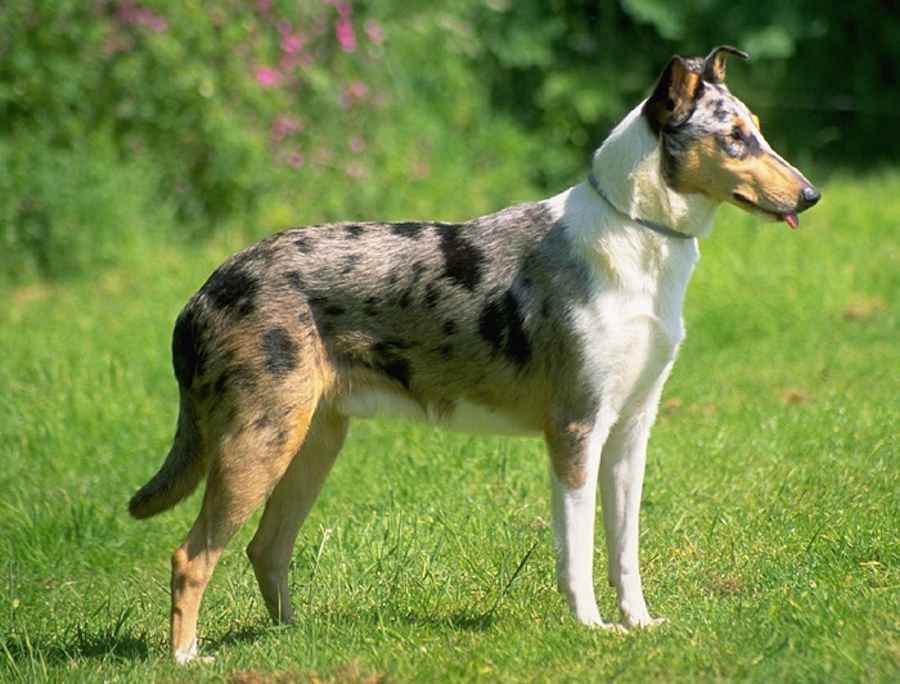 Coat Colour: There is no preference among the five recognised colours allowed in the show ring. They are: 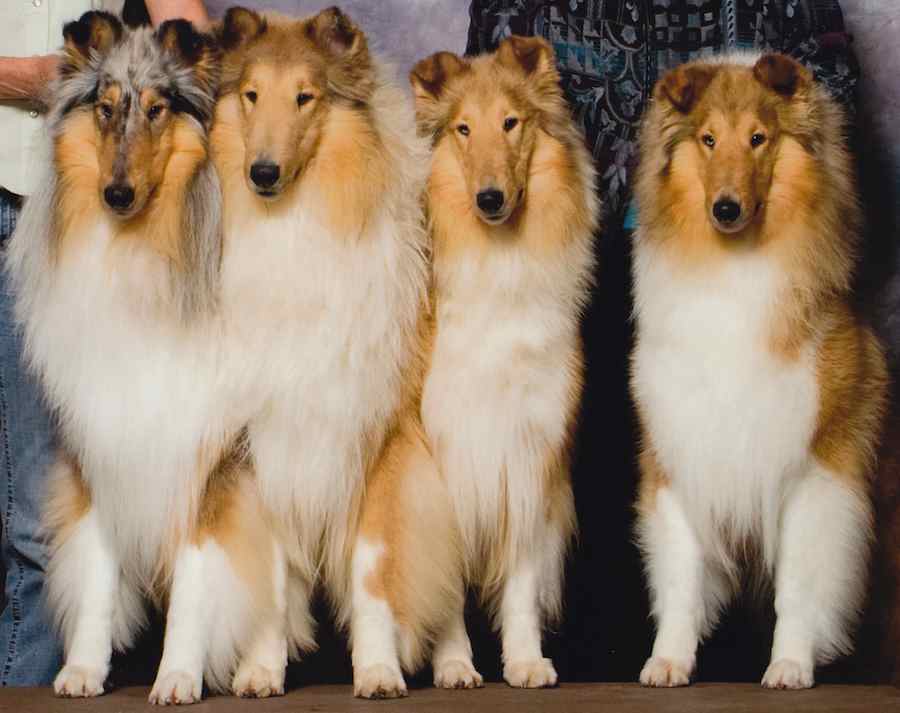 (a) Sable and White Includes all shades of brown ranging from lemon yellow through orange and red to dark mahogany, with or without darker shadings in the coat, always with white markings. (b) Tricolour Predominantly black with tan markings over the eyes, on the cheeks and sides of the muzzle, and under the tail. Tan may also appear on the legs and feet, usually between the black and white areas of colour. White markings always present. (c) Blue Merle and White A colour pattern similar to the tricolour except that the black areas of colour are replaced by a grey mottled colour, ranging from a clear, silvery blue to a darker matte grey, with black merling or spotting distributed throughout.

(d) Sable Merle and White Similar to the sable and white, but usually of a lighter sable colouring with darker sable mottling or spotting through the coat, often with grey tipping on the ears, and always with white markings. (e) White A basically white collie with a coloured head and ideally no more than 20% colour on the body. The secondary colour may be any of the allowed colours or colour combinations. White markings Allowed white markings are as follows: on the neck, throat, chest, forelegs and feet, rear legs and feet, belly and tail tip. A blaze may appear on the foreface or back skull or both. In white factored dogs, a white spot or spots may appear on the body. The extent of the markings is immaterial unless the white areas detract from the desired expression and overall beauty of the dog.

Eyes: In sable and white and tricolour collies, dark brown eyes are preferred and they must match each other in colour. Light coloured eyes are to be penalized according to the extent that they detract from the “sweet” expression so important in the breed. In blue merles and sable merles either or both eyes may be merle or china in colour, or dark brown with flecks of blue, though dark brown is preferred. In whites, eye colour confirms with that specified for the secondary coat colour.

Foreface: The foreface is chiseled to form a receptacle for the eyes and they are necessarily placed obliquely to give them the required forward outlook. They are almond shaped, of medium size and never properly appear to be large or prominent. The eye does not show a yellow ring or a sufficiently prominent haw to affect the dogs expression. The eyes have a clear, bright appearance, expressing intelligent inquisitiveness, particularly when the ears are drawn up and the dog is on the alert. A large, round, full eye seriously detracts from the desired “sweet” expression.

Nose, Eye Rims, Lip Coloration: All coat colour designations should show dark pigment in those areas. The nose should be solid black in colour.

Head: The head properties are of great importance. When considered in proportion to the size of the dog, the head is inclined to lightness and never appears massive. A heavy-headed dog lacks the necessary bright, alert, full-of-sense look that contributes so greatly to expression. Both in front and profile view, the head bears a general resemblance to a well-blunted wedge, being smooth and clean in outline and nicely balanced in proportion. On the sides, it tapers gradually and smoothly from the ears to the nose, without being flared out in back skull (cheeky) or pinched in muzzle (snipey). In profile view, the top of the back skull and the top of the muzzle lie in two approximately parallel, straight planes of equal length, divided by a very slight but perceptible stop or break. There is a very slight prominence of the eyebrows. The back skull is flat, without receding either laterally or backward and the occipital bone is not highly peaked. The proper width of back skull necessarily depends upon the combined length of skull and muzzle and the width of the back skull is less than its length. Thus the correct width varies with the individual and is dependent upon the extent to which it is supported by length of muzzle. A midpoint between the inside corners of the eyes (which is the centre of the correctly placed stop) is the centre of balance in length of head.

Teeth: The teeth are of good size, meeting in a scissors bite.

Ears: The ears are in proportion to the size of the head and, if they are carried properly and unquestionably “break” naturally, are seldom too small. Large ears usually cannot be lifted correctly off the head and even if lifted, they will be out of proportion to the size of the head. When in repose the ears are folded length-wise and thrown back into the frill. On the alert, they are drawn well up on the back skull and are carried about three-quarters erect, with about one-fourth of the ear tipping or “breaking” forward.

Expression: Expression is one of the more important points in considering the relative value of Collies. “Expression,” like the term “Character,” is difficult to define in words. It is not a fixed point as in colour, weight, or height and it is something the uninitiated can properly understand only by optical illustration. In general, however, it may be said to be the combined product of the shape and balance of the skull and muzzle, the placement, size, shape, and colour of the eyes, and the position, size and carriage of the ears. An expression that shows sullenness or which is suggestive of any other breed is entirely foreign. The Collie cannot be judged properly until its expression has been carefully evaluated.

Neck: The neck is firm, clean, muscular, sinewy. It is fairly long, is carried upright with a slight arch at the nape and imparts a proud, upstanding appearance.

Forequarters: The forelegs are straight and muscular, with a fair amount of bone considering the size of the dog. A cumbersome appearance is undesirable. The forearm is moderately fleshy and the pasterns are flexible, but without weakness.

Body: The back is strong and level, supported by powerful hips and thighs and the croup is sloped to give a well-rounded finish. The body is firm, hard and muscular, a trifle long in proportion to the height. The ribs are well rounded behind the well-sloped shoulders and the chest is deep, extending to the elbows. The loin is powerful and slightly arched.

Hindquarters: The hind legs are less fleshy than the forelegs, are muscular at the thighs, very sinewy and the hocks and stifles are well bent. The comparatively small feet are approximately oval in shape. The soles are well padded and tough and the toes are well arched and close together. When the Collie is not in motion, the legs and feet are judged by allowing the dog to come to a natural stop in a standing position so that both the forelegs and the hind legs are placed well apart, with the feet extending straight forward. Excessive “posing” is undesirable. Faults: A soft, open outer coat or a curly outer coat, regardless of quantity, is a fault. Because of the importance of the head characteristics, prominent head faults are severely penalized. Overshot or undershot jaws are undesirable, the latter being more severely penalized. Eye faults are heavily penalized. A dog with prick ears or low ears cannot show true expression and is penalized accordingly. Both narrow and wide placement of the forelegs are penalized. Noticeably fat dogs or dogs in poor flesh or with skin diseases or with no undercoat, are out of condition are moderately penalized accordingly. A dog which moves cowhocked, or a dog with straight stifles, should be penalized.

The Smooth Collie is judged by the same standard as the Rough Collie, except that the references to the quantity and distribution of the coat are not applicable to the Smooth variety, which has a short, hard, dense, flat coat of good texture, with an abundance of undercoat.