Borzoi (Russian Wolfhound) was originally bred for the coursing of hare, fox and wolves on more or less open terrain, relying on sight rather than scent. To accomplish this purpose, the Borzoi must be courageous, powerful, and capable of great speed. Special emphasis is placed on sound running structure, strong neck and jaws, keenness to game, and agility combined with proper condition. 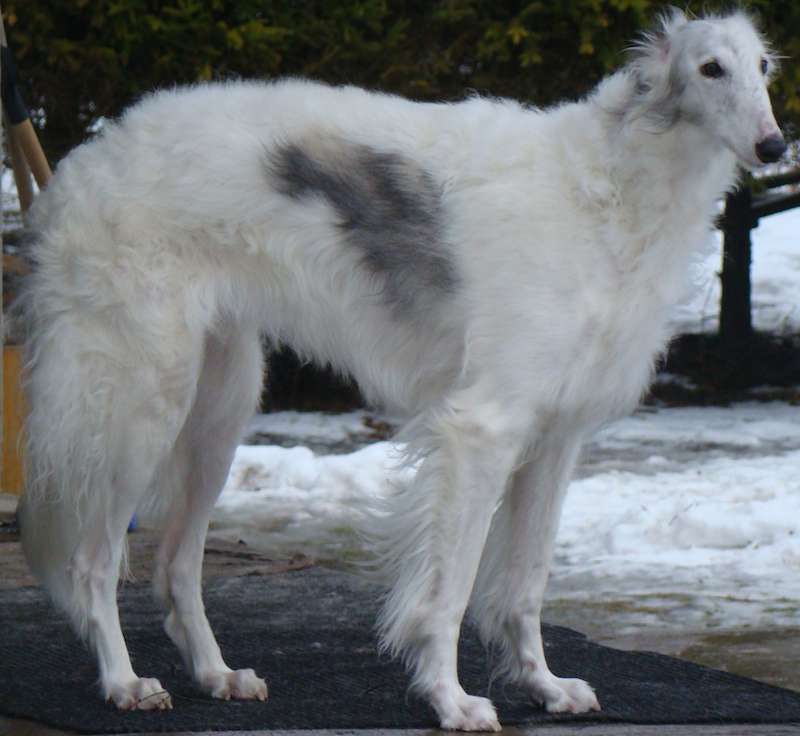 General Appearance: A well-balanced hound which is graceful, aristocratic and dignified. The Borzoi should always possess unmistakable elegance with flowing lines, graceful in motion or repose. Dogs masculine without coarseness, bitches feminine and refined.

Borzoi Temperament: Sensitive, alert to the environment with a quiet dignity. Aggressiveness or shyness undesirable. Coat and Colour: Silky in texture, never harsh, wiry or coarse. Coat may be flat, wavy or rather curly. Short and smooth on head and ears as well as on forelegs and hind legs below the hock. Much longer on body with heavy feathering on backs of forelegs, hindquarters, tail, and chest. On the neck, the frill is profuse and rather curly. Coats tend to be more profuse in males. Quantity of coat and undercoat is determined by maturity and seasonal changes. The undercoat is dense and soft. Any colour or pattern acceptable.

Head: Skull and Muzzle: Head long and lean and in proportion to the dog’s size and substance. Viewed from above, the Borzoi’s skull should look narrow, converging very gradually to the tip of the nose. The occipital process is accentuated. Well filled between and below the eyes. Measurement equal from the occiput to the inner corner of the eye (canthus) and from there to the tip of the nose. Skull slightly flat to slightly domed and narrow. Stop almost imperceptible. Head fine so that the direction of the bones and principal veins can be clearly seen. Seen from the side, the head and muzzle form a smooth, uninterrupted and slightly convex line. From the end of the nasal bone the nasal cartilage slopes slightly down to the nostrils. Nose large, black, nicely rounded and over-reaching. Mouth: Jaws deep, long and powerful, with proportionally large teeth. Scissor bite preferred, level bite acceptable. Full dentition preferred. The lips are black rimmed, thin and well stretched. Eyes large, neither bulbous, staring nor sunken. Expression is kind, intelligent and alert. Eyes dark brown, placed well back but not too wide apart. Eyelids set somewhat obliquely. Eye rims black and slightly almond shaped. Ears small, pointed and fine-leathered. Set high, not too far apart: tips nearly touching behind the occiput; when in repose folded back along the neck. Should be active and responsive; may be erect when alert, the tips sometimes falling over.

Forequarters: Withers not accentuated. Shoulders clean, sloping back, flat muscled. Forelegs, when seen from the front, appear bladed, clean and straight, elbows neither in nor out. Seen from the side, width at the shoulder narrowing down to the pastern; elbows directed to the rear in a vertical line to the withers. Pasterns slightly sloping, strong, flexible and springy. The length of the forearms is about half the total height at the withers.

Body: Chest: rib cage relatively long, of oval cut, slightly sprung, great depth of brisket to the level of the elbows. The sternum is slightly pronounced with adequate width of forechest. The abdomen is well tucked up. Back: rising in a graceful curve over the loins. The highest point of the curve is situated over the last rib. The spines of the vertebrae are prominent and the pelvic bones palpable. The curve may be less pronounced in bitches than in dogs. Loin: broad, powerful and very muscular; not long. Croup: long, wide and well muscled with a gradual fall away. The greatest width is at the hip joints.

Hindquarters: Hindquarters wider than shoulders. Hind legs long and very muscular. Thighs long and well developed with good second thigh. Stifles well angulated, hock joints broad, clean, and set low. Posterior line of the hock is vertical. When seen from the side the legs are slightly set back where a line can be dropped from the end of the pelvis (tuber Ischii) through the knuckles of the foot.

Tail: Long, rather low set, the tail bone reaching well below the hock joint. Well feathered, carried low in a graceful curve. In action may be used as a counter balance but not rising above the level of the back except when galloping. From the level of the hocks the tail may be sickle-shaped but not ringed.

Gait: A typical trot is a gait of moderate speed. At the trot, the front legs must reach well out with pasterns strong and springy. The rear legs are wider apart than the front while walking, but the feet tend to move closer to the midline as the dog accelerates. A flexible back is observable. When viewed from the side, there should be a noticeable drive with a ground covering stride. The overall appearance in motion should be that of effortless power, agility, smoothness, and grace. Hackney action or restricted gait is not desired. When in pursuit of prey, the dog moves at a very rapid gallop showing full extension and flexion of limbs and back exhibiting great speed and endurance.

Faults: The foregoing description is that of the ideal Borzoi or Russian Wolfhound. Any deviation from the above described dog must be penalized to the extent of the deviation, keeping in mind the original purpose of the breed.