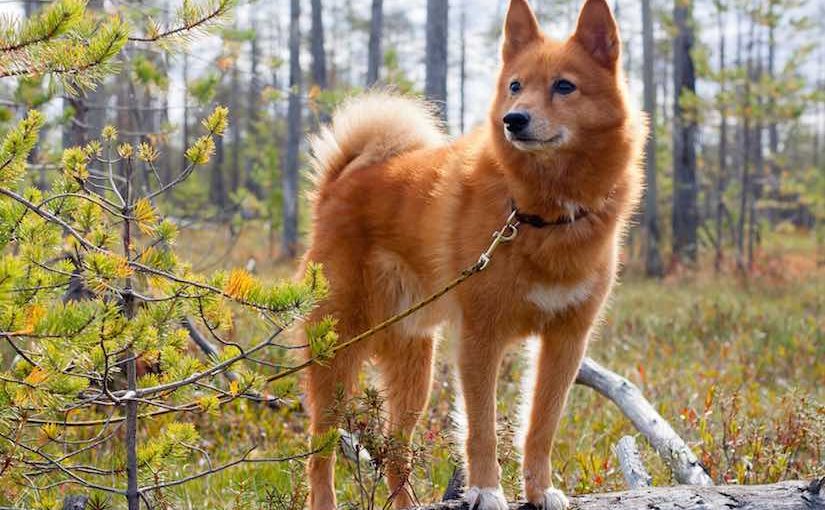 Finnish Spitz is from Finland. In its native Finland, this breed is known as the Suomenpystykorva, which means Finnish cock-eared hunting dog.

The national dog of Finland, the breed’s history stretches back into antiquity and it is accepted that the breed existed in the northern parts of Finland and Lapland for thousands of years. Gradually they moved southward and made themselves useful hunting everything from squirrel to bear. The Finnish Spitz is particularly good on the feathered game as well. When nothing had been done to preserve the purity of the breed by the end of the 19th century, two Finnish sportsmen traveled to the north country to obtain purebred specimens and set up a Finnish Spitz dog breeding program. Type and ability were set and the breed was recognized, at last, by the Finnish Kennel Club in the 1920s.

Courageous, faithful and a born hunter, the Finnish Spitz has the manners of a true gentleman. Reported to be especially good with children, he makes an ideal family pet and companion as well as a superior watchdog.

The Finnish Spitz, being the national dog of Finland, is the object of intense national pride. It is said that the breed reflects the verve and vitality necessary for survival in the Scandinavian north. Since earliest times it has been used as a natural bark-pointer for hunting small game and game birds. General Appearance: The Finnish Spitz, with its glorious red-gold coat, bold carriage, and lively expression, presents a fox-like picture. It has a squarish, symmetrical body with no exaggerated features. The pointed muzzle, small erect ears, dense coat, and curled tail denote its northern heritage. The dog’s whole being shows liveliness, especially the eyes, ears, and tail. Males should be decidedly masculine in appearance without coarseness. Females should be decidedly feminine in appearance without overrefinement.

Coat and Colour: The Finnish Spitz is double-coated. On the head and front of the legs, the coat is short and close. On the body and back of legs, it is coarse, longish, and semi-erect or erect. It is stiffer on the neck and back. Outer coat on shoulders is considerably longer and coarser, particularly in males. On the back of thighs and on tail, hair should be longer and dense. The undercoat is short, soft and dense. No trimming is allowed, not even of whiskers. 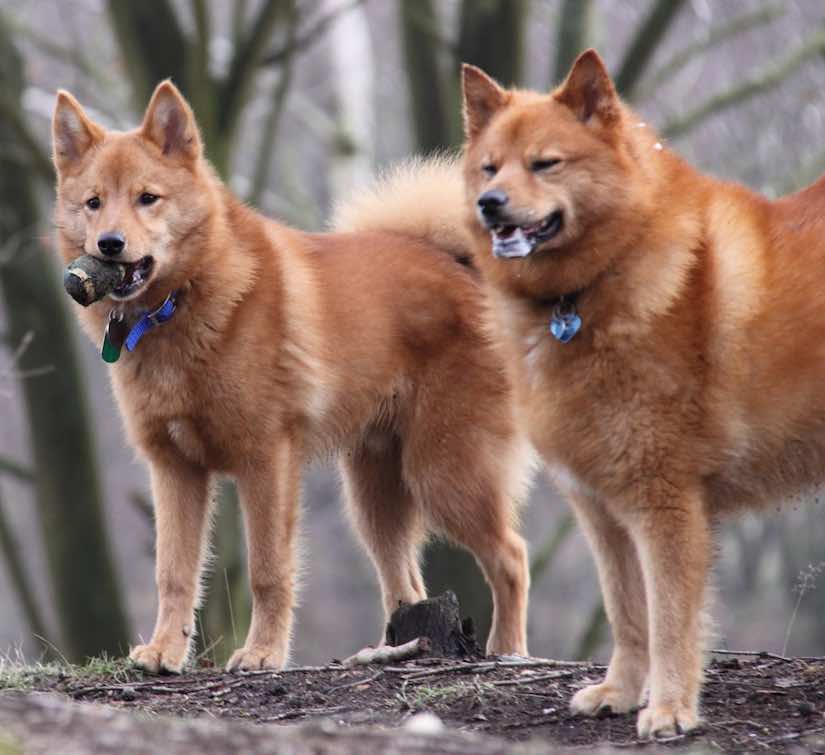 Color: On the back, reddish-brown or red-gold, preferably bright. The hair on inner sides of ears, cheeks, under the muzzle, on the breast, abdomen, behind the shoulders, inside the legs, back of thighs, and underside of the tail is of lighter shades. The undercoat is also a light color, making the whole coat glow. White marking on toes and a narrow strip of white on the chest is permitted but not desired. Black hairs on lips and sparse separate black-pointed hairs on back and tail are permitted, even desirable. Finnish Spitz puppies may have a good many black hairs which decrease with age (black on tail persisting longer).

Head: The head is medium-sized and clean cut. It is longer than it is broad in the ratio of 7:4. The forehead is slightly arched, and the stop pronounced. The muzzle is narrow; seen from above and from the sides evenly tapering. Nose is pitch black. Lips are tightly closed and thin Scissor bite. Missing teeth undesirable. Eyes are medium-sized, lively, preferably dark, almond shaped with black rims. They are set slightly aslant with outer corners tilted upwards. Ears are small, erect, sharply pointed. When alert, the ears should be parallel, upward standing, open towards the front, and very mobile.

Neck: The neck is muscular, of medium length. It appears shorter in males due to the heavier rough coat.

Forequarters: The shoulders of the Finnish Spitz are straight when compared to most other breeds. The legs are strong and straight. The slope of the pasterns is 25 to 30 degrees. Feet are tight, round, and cat-like. Long hare-like feet and splayed feet are undesirable. Removal of dewclaws is optional.

Body: This is almost square in outline. The back is short, level, and strong. The chest is deep. The belly is slightly drawn up. The Finnish Spitz should be in hard, muscular condition; any looseness or sloppiness should be faulted. Hindquarters: The thighs are muscular. Hocks are of medium length, straight, and parallel. The stifles should be slightly to moderately bent in balance to the angulation of the shoulder assembly. A severely straight stifle, or any unsoundness in the stifle joint (patellar luxation) must be severely penalized. Cat feet as in the forequarters. Rear dewclaws must be removed.

Tail: The tail is plumed, and curves vigorously from its root in an arch, forward, downward, then backward, pressing against the middle part of the thigh. The end of the tail should not hang vertically downward nor should it curl around in a complete circle or corkscrew. When straightened, the tip of the tailbone reaches the hock joint.

Gait: The Finnish Spitz is quick and light on its feet. It steps out briskly, trots with lively grace, and tends to single track as the speed increases.

Any departure from the foregoing points should be considered a fault, and seriousness of the fault should be in exact proportion to the degree.

Unsoundness in the carriage is a fault because the Finnish Spitz is a hunting dog.

Since trimming is a human fault, a dog with any trimming whatsoever should not be disqualified, but should not receive any major award.