Ibizan hound is a dog breed from Egypt. This slender and elegant sporting hound with its erect, mobile ears bears a striking resemblance to Anubis, the Egyptian watchdog of the dead (also see Pharaoh Hound). The Ibizan is believed to have originated in Egypt many centuries ago. Many likenesses of this unique breed have been found in tombs. Phoenician traders probably took the hounds to the Balearic island of Ibiza in the pre-Christian era and there in isolation they bred true for many centuries. 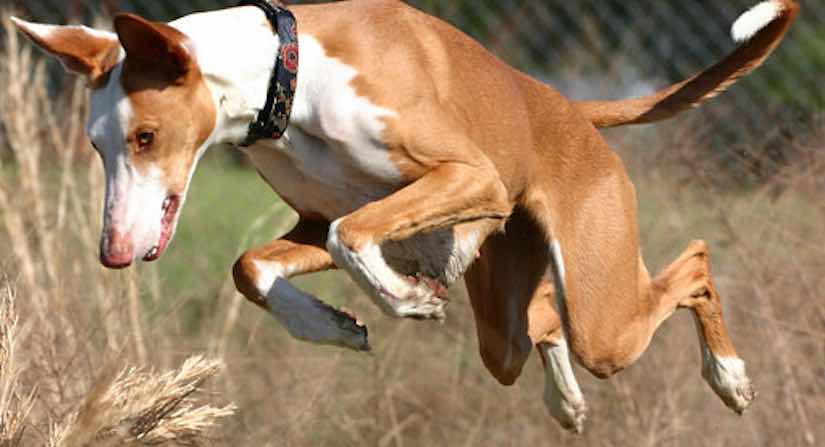 The Ibizan Hound (Podenco Ibicenco) is a hunting dog of great antiquity which has evolved from the original breed of ancient Egypt, and whose present-day quarry is primarily rabbits and hares. Unusually versatile, he is called the three-way hunter, owing to his highly developed sight, scent, and hearing. The Ibizan excels in agility, quick reflexes, stamina, and the ability to jump great heights from a standstill. Possessing keen enthusiasm, the Ibizan is a persistent and determined hunter. The breed is used by day or night, singly or in packs, and retrieves well to hand. Although mostly used on rabbits, it is also used on partridge, lynx, and deer. The conformation, instincts, and intelligence that are essential to the breed’s function must be preserved, and it is assumed that the top specimens in the breed will prove their ability in the hunting field. The Ibizan is even-tempered, affectionate and loyal. He is a very trainable and an easygoing companion. Keen and alert, playful and vivacious, yet gentle; although unusually inquisitive and gregarious. The Ibizan may be reserved with strangers and sometimes wary of strange places. However, this is not a nervous dog, neither shy nor aggressive. The Ibizan, while independent, is responsive and readily trainable. General Appearance: The Ibizan hound’s clean-cut lines, large prick ears, and light pigment give it a distinctive appearance. Lithe and racy, the Ibizan possesses a deer-like elegance, combined with the strength and power of a hunter. The Ibizan stands slightly longer than tall, with a dry-fleshed, sinewy, angular body. Moderate and not highly specialized in one ability at the expense of others, this is a dog of function, not fashion, and should be shown with vibrissae (whiskers) untrimmed. No aspect of the Ibizan hound should be emphasized to the point of exaggeration or caricature. In top show condition, the last few ribs and pelvic girdle, especially the hipbones, are in evidence. No penalty should be assessed a dog in hunting condition (strongly muscled, scant of flesh, possibly bearing hunting scars or broken teeth).

Smooth Ibizan hound: Shortest on the head and on ears, longest on the back of thighs and tail. Wire Ibizan hound: Roughly one to four inches long (2.5-10 cm), possibly with a generous mustache; hair is longer on the body, back of thighs and tail. Both coats are harsh in texture; neither is favored over the other. Color: Solid red, lion, or white, or a mixture of white and red, or white and lion. No color or pattern preferred. No other color allowed. Head: A truncated cone when viewed from above and in profile. When viewed from above, tapered from the widest part of the skull to the nose almost in a straight line; long and lean; flat skull, prominent occiput; length from eyes to nose and eyes to occiput is equal. Muzzle: Powerful but fine-boned, slightly chiseled under the eyes, in profile, the plane of the muzzle is parallel to that of the skull, until a slight roman convex at the nasal bones, just before the nose. Lips: Tight. Stop: Visible but slight. Nose: Prominent, extending beyond the lower jaw, having a rosy pigment; flesh-coloured or butterfly noses are acceptable; no trace of black or brown pigment. Teeth: Strong, well set in a scissors bite; full (42) dentition desired. Eyes: Oblique, rather small, tight eyelids, ranging in color from clear amber to caramel; the iris may have a dark rim; alert, intelligent expression. Ears: Large, independently mobile, natural prick ears; when alert, the base of the ear is in line with the rear corner of the eye; never cropped or tampered with; the shape is an elongated rhomboid truncated at a third of its longer diagonal in front view; when alert, in profile, the ears follow the line from the crest of the neck with a slight backward sweep at the tips; ears may be folded against the skull when relaxed. The Ibizan’s mobile ears are highly expressive of its mood and are one of the charms of the breed.

Neck: Long neck, slightly arched, strong but flatly muscled, and fitting smoothly into the body; skin snug at the throat. Forequarters: The Ibizan’s agility depends in part on a highly flexible forelimb assembly. Set on the 4-5 rib, the scapula is flexible, sloping to 30-35 degrees (measured along its spine); humerus rather upright, so that the elbow is in front of the deepest part of the brisket, and can be rotated easily away from the body to a minimum of 45 degrees; the immature Ibizan is allowed a degree of looseness in gait. The mature Ibizan, in hunting condition, will stand and gait true. There is a fine distinction between flexibility in the forelimb assembly and an unsound front. Dogs which are “tied in shoulder”, or cannot rotate humerus away from the body, lack flexibility; mature dogs who stand out at elbows or who gait markedly out at elbows are unsound. Legs: Forelegs long and straight with clean, fine bladed bone and prominent sinews; moderate width between the elbows. Pasterns: Erect to slightly sloping; flexible. Feet: Hare feet; long, closed toes; thick, durable pads; toes moderately knuckled and slightly webbed; front feet may be very slightly toed out; dewclaws removal is optional.

Body: The topline of the back may appear flat, but in reality, the lumbar vertebrae are gently arched (coursing develops the arch of the lumbar vertebrae until it is visible in the top line); the loin is muscular and of moderate width. Chest: The deepest part of the chest may be on a level with or above the elbow, but never below it; chest not broad, with slight spring of rib; prominent manubrium (point of the sternum); should not interfere with the flexibility of the forelimb assembly; abdomen well tucked up. Croup: Long, sloping of moderate width.

Hindquarters: Rear quarters appear relatively vertical because they are set under the body for agility and jumping power; when viewed in profile, a vertical line passes from the ischiatic tuberosity (pin bone) in front of the the hock assembly, through the middle of the rear paw at the proximal phalanges; prominent ilium (hip bone) and ischium (pin bone); stifle and hock joints moderately angulated; muscles well developed; upright hocks with well-defined calcaneal bone; no dewclaws on hind legs. There should be no question of the strength and power of the rear quarters.

Tail: Low set, reaches at least to hock; carried in a sickle, ring or whip position, never lying on the back.

Gait: The Ibizan’s gaits are distinctive. While not the fastest sighthound, he has great endurance. In full gallop, giving tongue, he seems to flow after his quarry in relentless pursuit. No fence or obstacle interrupts his path and his limber forelimbs, flexible spine and counterbalancing tail, allow him to turn abruptly within his own length without losing speed. Show the Ibizan in a controlled, single-tracking, diagonally supported trot; front and rear action is balanced, springing from the pasterns with every joint showing great flexion, effortless, elegant, leaving the impression that the feet barely touch the ground, yet covering much ground. The tail is carried high but not touching the back. At all times the dog is in perfect balance, and the rhythm of his gait is difficult to break.

Disqualifications: Black or brown pigment in skin or coat, indicating a lack of breed purity; any color other than red, lion, or white.