Rhodesian Ridgeback is the only recognized dog breed originating in South Africa. Unique in having a ridge of hair in the shape of a dagger on its back, it is said to have descended from native ridged dogs known in South Africa since the 16th century. In the late 1870s, a few of these dogs were acquired by Cornelius Van Rooyen, a South African who hunted big game for a living. For 35 years he refined his ‘lion dogs.’ Basic Greyhound blood gave his first dogs speed and to this he added the Pointer for scenting ability and Collie, terriers and Great Dane crosses for endurance, agility and biting power – through it all, the dogs retained the ridge. After Van Rooyen’s death, a group of fanciers who had continued to breed the big-game stalkers met in 1922 to draw up a standard, form a club and seek Rhodesian Ridgeback breed recognition from the South African Kennel Club. 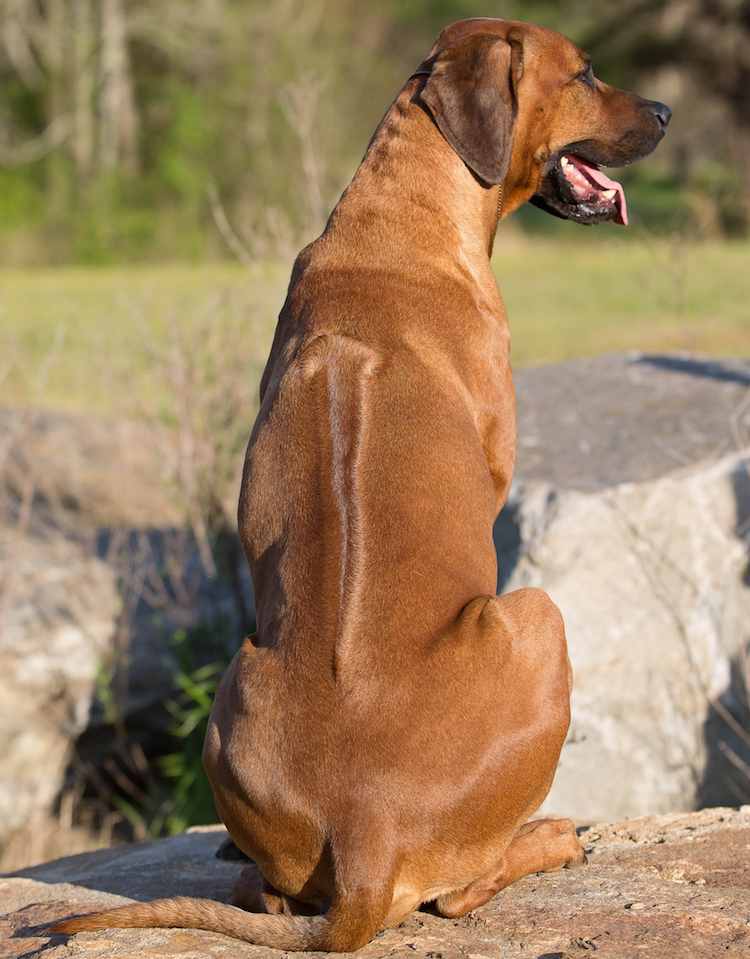 General Appearance: The Rhodesian Ridgeback should represent a strong muscular and active dog, symmetrical in outline, and capable of great endurance with a fair amount of speed. The peculiarity of this breed is the ridge on the back, which is formed by the hair growing in the opposite direction to the rest of the coat. The ridge must be regarded as the escutcheon of the breed. The ridge should be clearly defined, tapering and symmetrical. It should start immediately behind the shoulders and continue up to a point between the prominence of the hips (haunch bones), and should contain two identical crowns opposite each other. The lower edges of the crown should not extend further down the ridge than one-third of the ridge. Coat and Colour: The coat should be short and dense, sleek and glossy in appearance, but neither woolly nor silky. Colour light wheaten to red wheaten. A little white on the chest and toes permissible, but excessive white here and on the belly and above paws is undesirable.

Head: The head should be of a fair length, and skull flat and rather broad between the ears and should be free from wrinkles when in repose. The stop should be reasonably well defined, and not in one straight line from the nose to the occiput bone, as required in a Bull Terrier. The muzzle should be long, deep and powerful. Jaws level and strong with well developed teeth, especially the canines or holders. The lips clean, closely fitting the jaws. The nose should be black, or brown, in keeping with the colour of the eyes. No other coloured nose is permissible. A black nose should be accompanied by dark eyes, a brown nose by amber eyes. The eyes should be moderately well apart, and should be round, bright, and sparkling, with intelligent expression, their colour harmonizing with the colour of the nose. The ears should be set rather high, of medium size, rather wide at the base, and tapering to a rounded point. They should be carried close to the head. Neck: The neck should be fairly strong and free from throatiness.

Forequarters: The shoulder should be sloping, clean, and muscular, denoting speed. The forelegs should be perfectly straight, strong and heavy in bone; elbows close to the body. The feet should be compact, with well-arched toes, round, tough, elastic pads, protected by hair between the toes and pads.

Body: The chest should not be too wide, but very deep and capacious; ribs moderately well sprung, never rounded like barrel hoops (which would indicate want of speed), the back powerful, and loins strong, muscular and slightly arched.

Hindquarters: In the hind legs the muscles should be clean, well defined, and hocks well down.

Tail: The tail should be strong at the insertion, and generally tapering towards the end, free from coarseness. It should not be inserted too high or too low, and should be carried with a slight curve upwards, never curled.