Whippet and the Greyhound stem from common stock. However, dog lovers bred the Whippet to his present form in Britain. People knew the Whippet as a poor man’s racehorse!

Whippet racing became a popular sport with the working class in the north of England. At first, people slipped whippets in an enclosure to chase live rabbits. However, when society outlawed this sport as cruel, lure or ‘rag’ racing was started. Handlers held the whippets on handicap marks by ‘slippers’ who would turn them loose at the starter’s pistol to race 200 yards to their owners. The owners would wave towels and shout encouragements to their dogs.

Lancashire textile workers who came to work in New England mills USA, brought whippets with them. In the United States, they continued to provide racing and lure coursing excitement.

The Whippet is gentle, friendly, calm and amiable. He prefers being treated as a member of the family.

General Appearance: The Whippet should be a dog of moderate size, very alert, that can cover a maximum of distance with a minimum of lost motion, a true sporting hound. Head: Long and lean, fairly wide between the ears, scarcely perceptible stop, good length of muzzle which should be powerful without being coarse. Nose entirely black. Teeth white, strong and even. Teeth of upper jaw should fit closely over the lower. Eyes large, intelligent, round in shape and dark hazel in color, must be at least as dark as the coat color. The expression should be keen and alert. Highly undesirable to have a sulky expression and lack of alertness. Ears small, fine in texture, thrown back and folded. Semi-pricked when at attention.

Neck: Long and muscular, well arched and with no suggestion of throatiness, widening gradually into the shoulders. Must not have any tendency to a weak neck. Forequarters: Shoulders long, well laid back with long, flat muscles. Forelegs straight and rather long, held in line with the shoulders and not set under the body so as to make a forechest. Elbows should turn neither in nor out and move freely with the point of the shoulder. A fair amount of bone, which should carry right down to the feet. Pasterns strong.

Body: Back strong and powerful, rather long with a good, natural arch over the loin creating a definite tuck-up of the underline but covering a lot of ground. Brisket very deep and strong, reaching as nearly as possible to the point of the elbow. Ribs well sprung but with no suggestion of barrel shape. Should fill in the space between the forelegs so that there is no appearance of a hollow between them.

Hindquarters: Long and powerful, stifles well bent, hocks well let down and close to the ground. Thighs broad and muscular, the muscles should be long and flat. A steep croup is most undesirable. Well formed feet with strong, thick pads and well-knuckled-up paws. Tail: Long and tapering, should reach to a hipbone when drawn through between the hind legs. Whippets must not carry their tail higher than the top of the back when moving.

Gait: Low, free moving and smooth, as long as is commensurate with the size of the dog.

Disqualification: An undershot mouth. Any coat type other than as described. 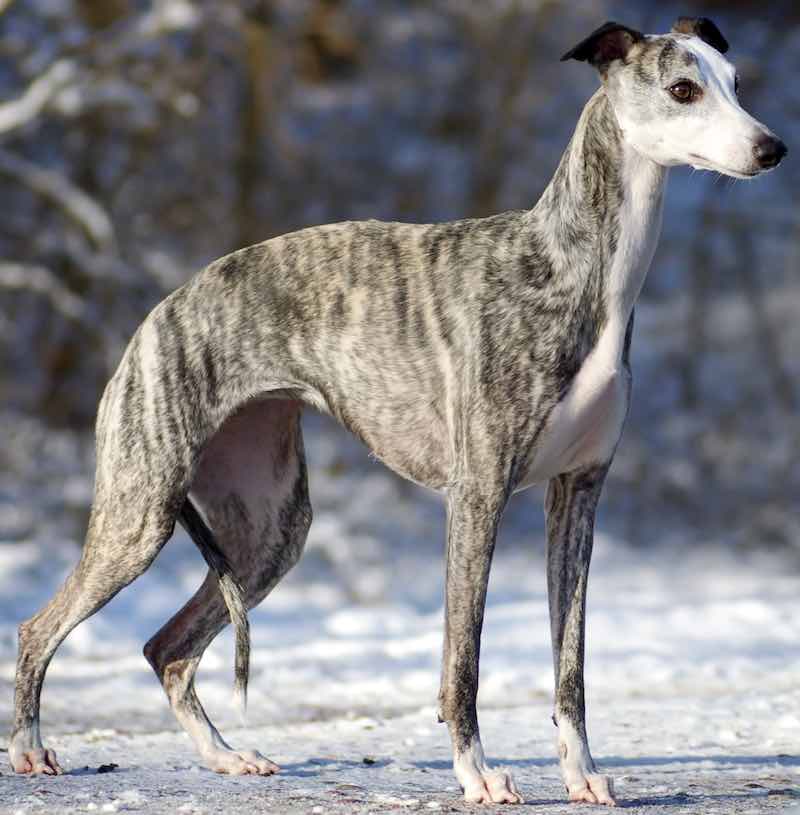