The German Shorthaired Pointer (GSP) is a dog of stable temperament and keen enthusiasm. When the right to hunt game was no longer restricted to nobility, the average German sportsman wanted an all-purpose dog, a companion that could hunt fur or feather on land or over water. The development of the German Shorthaired Pointer began between 1870 and 1880. The breed was based primarily on dogs of Spanish Pointer origin crossed with various breeds to get the desired working ability. The blood of the English Pointer was introduced to add dash and superior scenting ability. Known as the ‘Kurzhaar’ in his country of origin, the German Shorthaired Pointer was first introduced to North America in the mid-1920s. It didn’t take long for the handsome breed to become established here as a popular sporting dog and family pet.

General Appearance: The over-all picture which is created in the observer’s eye should be that of an aristocratic, well-balanced, symmetrical animal with conformation indicating power, endurance, agility, and a look of intelligence and animation. The German Shorthaired Pointer should be neither unduly small nor conspicuously large. It should rather give the impression of medium size but be like the proper hunting dog breed, “with a short back but standing over plenty of ground”. Tall, leggy individuals seldom possess endurance or sound movement. Dogs which are ponderous or unbalanced because of excess substance should be definitely rejected. The first impression should be that of a keenness which denotes full enthusiasm for work without indication of nervous or flighty character. Movement should be alertly co-ordinated without waste motion. Grace of outline, clean-cut head, sloping shoulders, deep breast, powerful back, strong quarters, good bone composition, adequate muscle, well carried tail and taut coat all of which should combine to produce a look of nobility and an indication of anatomical structure essential to correct gait which must indicate a heritage of purposefully conducted breeding. 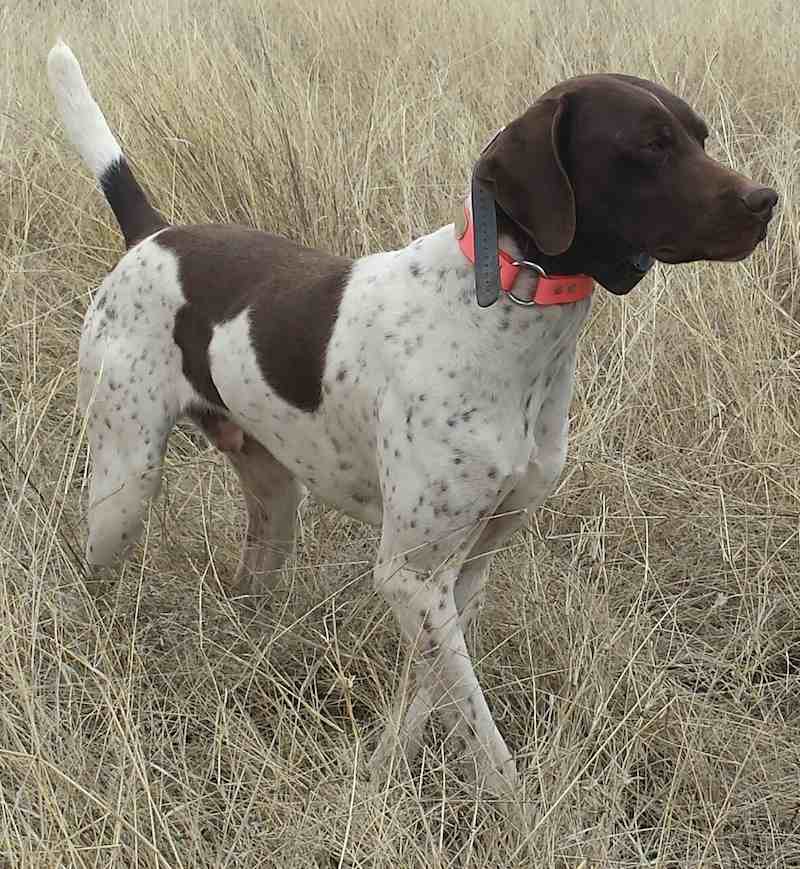 Coat and Skin: The skin should look close and tight. The hair should be short and thick and feel tough and hard to the hand; it is somewhat longer on the underside of the tail and the back edge of the haunches. It is softer, thinner, and shorter on the ears and head. Head: Clean-cut, neither too light nor too heavy, in proper proportion to the body. Skull should be reasonably broad, arched on side and slightly round on top. Scissura (median line between the eyes at the forehead) not too deep, occipital bone not as conspicuous as in the case of the Pointer. Foreface should rise gradually from noses to forehead–not resembling the Roman nose. This is more strongly pronounced in the dog than in the bitch, as befitting his sex. The chops should fall away from the somewhat projecting nose. Lips should be full and deep, never flewy. The chops should not fall over too much, but form a proper fold in the angle. The jaw should be powerful and the muscles well developed. The line to the forehead should rise gradually and should never possess a definite stop as in the case of the Pointer, but rather a stop-effect when viewed from the side, due to the position of the eyebrows. The muzzle should be sufficiently long to enable the dog to seize properly and to facilitate his carrying game a long time. A pointed muzzle is not desirable. The entire head should never give the impression of tapering to a point. The depth should be in the right proportion to the length, both in the muzzle and in the skull proper. Nose brown, the larger the better; nostrils well opened and broad. Flesh-coloured and spotted noses are not desirable. The teeth should be strong and healthy. The molars should intermesh properly. Incisors should fit close in a true scissors bite. Jaws should be neither overshot nor undershot. The eyes should be of medium size, full of intelligence, and expressive, good-humoured, and yet radiating energy, neither protruding nor sunk. The eyelids should close well. The best colour is a dark shade of brown. Light yellow, china, or wall (bird of prey) eyes are not desirable. Ears should be broad and set fairly high, lie flat and never hang away from the head. Placement should be above eye level. The ears, when laid in front without being pulled, should about meet the lip angle. In the case of heavier dogs, they should be correspondingly longer.

Neck: The German Shorthaired Pointer’s neck should be of adequate length to permit the jaws reaching game to be retrieved, sloping downwards on beautifully curving lines. The nape should be rather muscular, becoming gradually larger towards the shoulders. Moderate hound-like throatiness permitted.

Forequarters: The shoulders should be sloping, movable, well covered with muscle. The shoulder blades should lie flat. The upper arm (also called the cross bar, i.e., the bones between the shoulder and elbow joints) should be as long as possible, standing away somewhat from the trunk so that the straight and closely muscled legs, when viewed from in front, should appear to be parallel. Elbows which stand away from the body or are pressed right into same indicate toes turning inwards or outwards, which should be regarded as faults. Pasterns should be strong, short, and nearly vertical.

Body: Back should be short, strong, and straight with a slight rise from root of tail to withers. The breast in general should give the impression of depth rather than breadth; for all that, it should be in correct proportion to the other parts of the body with fair depth of chest. The ribs forming the thorax should be well curved and not flat; they should not be absolutely round or barrel-shaped. Ribs that are entirely round prevent the necessary expansion of the chest when taking breath. The back ribs should reach well down. The circumference of the breast immediately behind the elbows should be smaller than that of the breast about a hand’s-breadth behind elbows, so that the upper arm has room for movement. Excessively long or hog-backed should be penalized. Loins strong, of moderate length and slightly arched. Tuck-up should be apparent. Hindquarters: The hips should be broad with hip sockets wide apart and fall slightly toward the tail in a graceful curve. Thighs strong and well muscled. Stifles well bent. Hock joints should be well angulated with strong, straight bone structure from hock to pad. Angulation of both stifle and hock joints should be such as to combine maximum combination of both drive and traction. Hocks should turn neither in nor out. Feet should be compact, close-knit and round to spoon-shaped, the toes sufficiently arched and heavily nailed. The pad should be strong and hard.

Bones: Thin and fine bones are by no means desirable in a German Shorthaired Pointer dog which should be able to work over any and every country and should possess strength. The main importance accordingly is laid not so much on the size as being in proper proportion to the body. Dogs with coarse bones are handicapped in agility of movement and speed.

Tail: Is set high and firm, and must be docked, leaving approximately two-fifths of length. The tail hangs down when the dog is quiet; is held horizontally when he is walking, never turned over the back or considerably bent but violently wagged when he is on the search.

Gait: A smooth, lithe gait is most desirable. Symmetry and field quality are most essential. A German Shorthaired Pointer dog well balanced in all points is preferable to one with outstanding good qualities and defects.

Faults: Bone structure too clumsy or too light; head too large; too many wrinkles in forehead; dish-faced, snipey muzzle; ears too long, pointy or fleshy; flesh-coloured nose; eyes too light, too round or too closely set together; excessive throatiness; Cow-hocks; feet or elbows turned inward or outward; down on pasterns; loose shoulders; sway back; black coat or tricoloured; any colours except liver or some combination of liver and white.