Similar and related variety of the Large Munsterlander, the Small Munsterlander (Kleiner Munsterlander) is a 20th century creation from old type Spanish type Spaniels. The Kleiner Munsterlander was developed in Westphalia, Germany from small gundogs related to the German Longhaired Pointer and Dutch, French and Spanish gundogs. The breed was discovered by Herr Edmund Löns who recognized it’s above average abilities and worked towards the establishment of a parent club in 1912.

The small Munsterlander is a happy, carefree dog breed that is equally at home hunting as he is playing in the backyard. 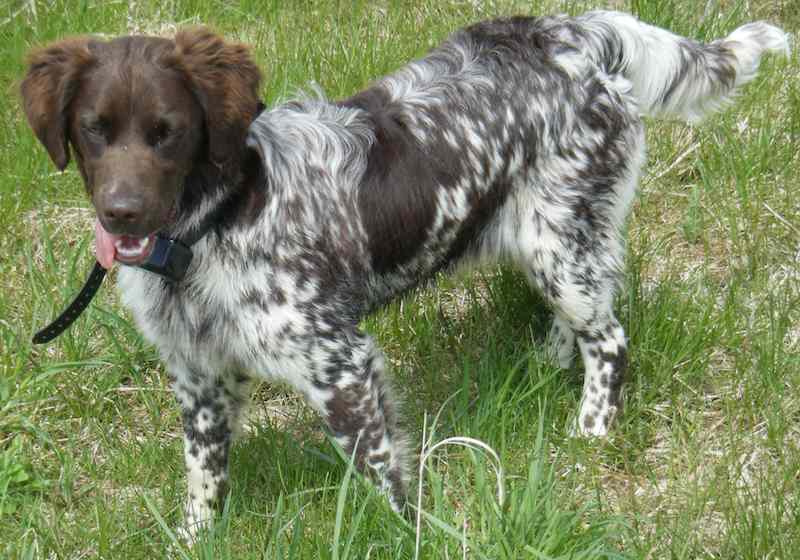 General Appearance: Strong and harmonious build of medium size, showing balanced proportions with a lot of quality and elegance. Distinguished head. In upright posture the dog displays flowing outlines with horizontally carried tail. Its front legs are well feathered, the hind legs with breeches, and the tail has a distinct flag. Its glossy coat should be straight or slightly wavy, dense and not too long. Its movement is harmonious and far reaching.

Small Munsterlander Temperament: The Small Munsterlander is intelligent and capable of learning, full of temperament but even, with steady character; its attitude towards people is alert and friendly (suitable for family life), with good social behaviour and keeps close contact with his master (team spirit); with passionate, persevering predatory instinct, versatile hunting aptitudes and strong nerves and keenness for game.

Coat: Hair: Dense, of medium length, not or only slightly wavy, close lying, water repellent. The outlines of the body may not be hidden by too long coat. By its density it should provide as good protection against weather, unfavourable terrain conditions and injuries as possible. Short smooth coat and on the ears is faulty. Forelegs feathered hindlegs with breeching down to the hocks, tail with a long flag and white tip, abundant coat on the forechest is undesirable. Skin: Tight fitting, without folds.

Colour: Brown-white or brown roan with brown patches, brown mantle or brown ticking; blaze permitted. Tan coloured markings at the muzzle, the eyes and around the anus are permissible (“Jungklause markings”). Head: The expression of the head is part of the type. Skull: Distinguished, lean, flat to slightly arched. Stop: Only slightly pronounced but distinctly recognizable. Nose: Wholecoloured brown. Muzzle: Powerful, long, straight. Lips: Short, tight closing, well pigmented-wholecoloured brown. Jaws/Teeth: Large white teeth. Powerful jaws with regular and complete scissor bite with the upper teeth closely overlapping the lower teeth and set square to the jaws. 42 teeth according to the dentition formula. Cheeks: Strong, well muscled. Eyes: Of medium size, neither protruding nor deep set. As dark brown as possible. Eyelids tight fitting to the eyeballs, covering the haws. Ears: Broad, set on high, lying close to the head, tapering towards the tips, ear leather should not reach beyond the corner of the mouth.

Forequarters: Viewed from the front straight and rather parallel, viewed from the side legs set well under the body. The distance from the ground to the elbows should approximately equal to the distance from the elbows to the withers. Shoulders: Shoulder blades lying close to the body, strongly muscled. Shoulder and upperarm forming a good angle of approximately 90 degrees. Upper arm: As long as possible, well muscled. Elbows: Close to the body, neither turning in nor out. The upper arm forming a good angle with the forearm. Forearm: Strong bones, perpendicular to the ground. Carpal joint: Strong. Pasterns: Very slightly sloping. Front feet: Round and arched with well knit toes and sufficiently thick, tough, robust pads. Not too heavy coat. Parallel in stance or in movement, neither tuning in nor out. Body: Topline: Slightly sloping in a straight line. Withers: Pronounced. Back: Firm, well muscled. The spinal processes should be covered by the musculature. Loins: Short, broad, muscular. Croup: Long and broad, not short slanting, only slightly sloping towards the tail; well muscled. Broad pelvis. Chest: Rather deep than broad, breastbone reaching as far backwards as possible. Ribs well arched. Underline and belly: Slight tuck-up towards the rear in an elegant curve; lean.

Hindquarters: Viewed from the rear straight and parallel. Correct angulation in stifles and hocks. Strong bones. Upper thigh: Long, broad, muscular; forming a good angle with the pelvis. Stifle: Strong, upper and lower thigh forming a good angle. Lower thigh: Long, muscular and sinewy. Hock joint: Strong. Metatarsus: Short, perpendicular to the ground. Hind feet: Round and arched with well knit toes and sufficiently thick, tough, robust pads; not too heavy coat. Parallel in stance or in movement neither turning in nor out.

Tail: Set on high, with long flag, strong at the base, then tapering. Of medium length. Carried downwards in repose, horizontally and not too high above the level of the topline with a slight sweep when in action. In the lower third it may be curved slightly upward.

Faults: Any departure of the foregoing points must be considered a fault and the seriousness with which the fault should be regarded should be in exact proportion to its degree.

Severe Faults: ; Deviation of the size limits between +/- 2 cm (.79 inches) and +/- 4 cm (1.57 inches) ; Clumsy, big-boned conformation ; Serious deviations from the correct proportions of body, neck and height and withers. ; More than 50% of the nose flesh-coloured or spotted ; Pointed muzzle. Dished nose bridge ; Eyes too light. Light yellow hawk eyes ; Serious lack of depth of chest or too flat sided brisket. Barrel shaped brisket ; Elbows heavily turning out or in ; Steep pasterns ; Strongly cow hocked or barrel legged, in stance as well as in movement ; Splayed toes; flat feet ; Clumsy movement ; Coat too curled ; Smooth hairless ears or too long and curled fringes on the ears.