Border Terrier dog breed is good-tempered, affectionate, obedient and easily trained, and is at home with his family. In the field, he’s game, hard as nails and driving in attack on vermin. The birthplace of the Border Terrier is believed to be the Northumberland valley of Coquetdale and at one time the breed was known as the Coquetdale Terrier. With livestock being subjected to the attacks of hill foxes, farmers and shepherds needed a game terrier that could follow a horse yet be small enough to go to ground after the fox. Selective breeding for the necessary qualities led to the development of the Border Terrier, which worked with packs of Border Foxhounds in the hunt and may have taken its name from this association. The hallmark of the breed is the head and expression that bears a strong resemblance to an otter. General Appearance: Since the Border Terrier is a working terrier of a size to go to ground and able, within reason, to follow a horse, his conformation should be such that he be ideally built to do his job. No deviations from this ideal conformation should be permitted, which would impair his usefulness in running his quarry to earth and in bolting it therefrom. For this work he must be alert, active and agile, and capable of squeezing through narrow apertures and rapidly traversing any kind of terrain. His head, like that of an otter, is distinctive. It should be the aim of Border Terrier breeders to avoid such overemphasis of any point in the standard as might lead to unbalanced exaggeration. The Border Terrier is an active terrier of medium bone, strongly put together, suggesting endurance and agility, but rather narrow in shoulder, body, and quarter. The body is covered with a somewhat broken, though close-fitting and intensely wiry jacket. The characteristic otter head with its keen eye, combined with a body poise which is at the alert gives a look of fearless and implacable determination characteristic of the breed. The proportions should be that the height at the withers is slightly greater than the distance from the withers to the tail, i.e., by possibly 1 – 1-1/2 inches (3-4 cm ) in a 14 lb. (6.4 kg) dog. 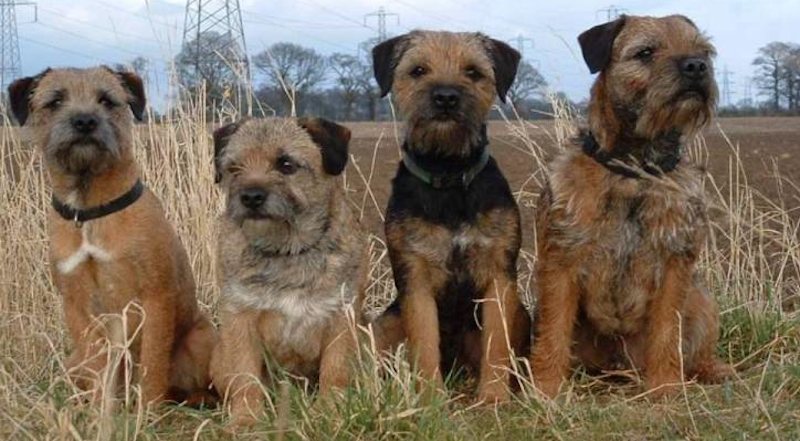 Border Terrier Temperament: His temperament ideally exemplifies that of a Terrier. By nature he is good-tempered, affectionate, obedient, and easily trained. In the field he is hard as nails, game as they come, and driving in attack.

Coat and Colour: A short and dense undercoat covered with a very wiry and somewhat broken topcoat which should lie closely, but it must not show any tendency to curl or wave. With such a coat a Border should be able to be exhibited almost in his natural state, nothing more in the way of trimming being needed than a tidying-up of the head, neck, and feet. The hide is very thick and loose fitting. Colour red, grizzle and tan, blue and tan, or wheaten. A small amount of white may be allowed on the chest but white on the feet should be penalized. Head: Similar to that of an otter. Moderately broad and flat in skull with plenty of width between the eyes and between the ears. A slight, moderately broad curve at the stop rather than a pronounced indentation. Cheeks slightly full. Muzzle short and well filled. A dark muzzle is characteristic and desirable. A few short whiskers are natural to the breed. Nose black, and of a good size. Teeth strong, with a scissors bite, large in proportion to size of dog. Eyes dark hazel and full of fire and intelligence. Moderate in size, neither prominent nor small and beady. Ears small, V-shaped and of moderate thickness, dark preferred. Not set high on the head, but somewhat on the side, and dropping forward close to the cheeks. They should not break above the level of the skull.

Neck: Clean, muscular, and only long enough to give a well-balanced appearance. It should gradually widen into the shoulder.

Forequarters: Shoulders well laid back and of good length, the blades converging to the withers gradually from a brisket not excessively deep or narrow. Forelegs straight and not too heavy in bone and placed slightly wider than in a Fox Terrier.

Body: Deep, fairly narrow and of sufficient length to avoid any suggestion of lack of range and agility. Deep ribs carried well back and not over- sprung in view of the desired depth and narrowness of the body. The body should be capable of being spanned by a man’s hands behind the shoulders. Back strong but laterally supple, with no suspicion of a dip behind the shoulder. Loins strong and the underline fairly straight.

Hindquarters: Muscular and racy, with thighs long and nicely moulded. Stifles well bent and hocks well let down. Feet small and compact. Toes should point forward and be moderately arched with thick pads.

Tail: Moderately short, thick at the base, then tapering. Not set on too high. Carried gaily when at the alert, but not over the back. When at ease, a Border may drop his stern.

Gait: Straight and rhythmical before and behind, with good length of stride and flexing of stifle and hock. The dog should respond to his handler with a gait which is free, agile and quick.