The Miniature Schnauzer is a robust, active dog of terrier type, resembling his larger cousin, the Standard Schnauzer, in general appearance, and of an alert, active disposition. He is sturdily built, nearly square in proportion of body length of height, with plenty of bone, and without any suggestion of toyishness. Faults: Type – Toyishness, raciness, or coarseness.

Temperament: The typical Miniature Schnauzer is alert and spirited, yet obedient to command. He is friendly, intelligent and willing to please. He should never be over-aggressive or timid. Faults: Temperament – shyness or viciousness. 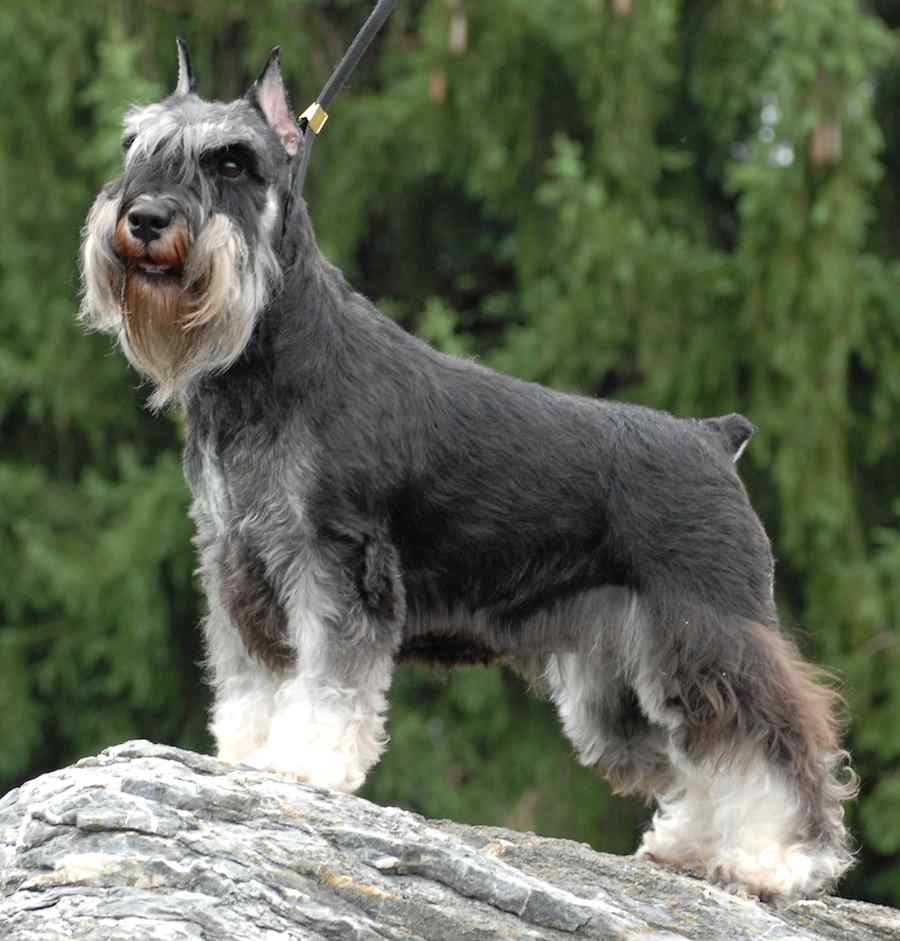 Coat: Double, with hard, wiry, outer coat and close undercoat. Head, neck, and body coat must be plucked. When in show condition the body coat should be of sufficient length to determine texture. Close covering on neck, ears, and skull. Faults: Coat too soft or too smooth and slick in appearance.

Black is the only solid colour allowed. It must be a true black with no grey hairs and no brown tinge except where the whiskers may have become discoloured. A small white spot on the chest is permitted, not to exceed one inch in diameter.

Head: Strong and rectangular, its width diminishing slightly from ears to eyes, and again to the tip of the nose. The forehead is unwrinkled. The top skull is flat and fairly long. The foreface is parallel to the top skull, with a slight stop; and it is at least as long as the top skull. The muzzle is strong in proportion to the skull; it ends in a moderately blunt manner, with thick whiskers which accentuate the rectangular shape of the head. Faults: Head coarse and cheeky. The teeth meet in a scissors bite. That is, the upper front teeth overlap the lower front teeth in such a manner that the inner surface of the upper incisors barely touches the outer surface of the lower incisors when the mouth is closed. Faults: Bite – undershot or overshot jaw. Level bite. Eyes: small, dark brown and deepset. They are oval in appearance and keen in expression. Faults: Eyes – light and/or large and prominent in appearance or excessively small. Ears: when cropped, the ears are identical in shape and length, with pointed tips. They are in balance with the head and not exaggerated in length. They are set high on the skull and carried perpendicularly at the inner edges, with as little bell as possible along the outer edges. When uncropped, the ears are small and V-Shaped, folding close to the skull.

Neck: Strong and well arched, blending into the shoulders, and with the skin fitting tightly at the throat.

Forequarters: The forequarters have flat, somewhat sloping shoulders and high withers. Forelegs are straight and parallel when viewed from all sides. They have strong pasterns and good bone. They are separated by a fairly deep brisket which precludes a pinched front. The elbows are close, and the ribs spread gradually from the first rib so as to allow space for the elbows to move close to the body. Faults: Loose elbows.

Body: Short and deep, with the brisket extending at least to the elbows; ribs are well sprung and deep, extending well back to a short loin. The underbody does not present a tucked up appearance at the flank. The topline is straight; it declines slightly from the withers to the base of the tail. The overall length from chest to stern bone appears to equal the height at the withers. Faults: Chest too broad or shallow in brisket. Sway or roach back.

Hindquarters: The hindquarters have strong-muscled, slanting thighs; they are well bent at the stifles and straight from hock to so-called heel. There is sufficient angulation so that, in stance, the hocks extend beyond the tail. The hindquarters never appear overbuilt or higher than the shoulders. Feet short and round (cat feet) with thick, black pads. The toes are arched and compact. Faults: Bowed or cow-hocked hindquarters.

Tail: Set high and carried erect. It is docked only long enough to be clearly visible over the topline of the body when the dog is in proper length of coat. Faults: Tail-set low.

Gait: The trot is the gait at which movement is judged. When approaching, the forelegs, with elbows close to the body, move straight forward, neither too close nor too far apart. Going away, the hind legs are straight and travel in the same planes as the forelegs.

It is generally accepted that when a full trot is achieved, the rear legs continue to move in the same planes as the forelegs, but a very slight inward inclination will occur. It begins at the point of the shoulder in front and at the hip joint in the rear. Viewed from the front or the rear, the legs are straight from these points to the pads. The degree of inward inclination is almost imperceptible in a Miniature Schnauzer that has correct movement. It does not justify moving close, toeing-in, crossing, or moving out at the elbows.

Viewed from the side, the Miniature Schnauzer’s forelegs have good reach, while the hind legs have strong drive, with good pickup of hocks. The feet turn neither inward nor outward. Faults: Sidegaiting. Padding in front, or high hackney knee action. Weak rear action.

Faults: Toyishness, raciness, or coarseness. Shyness or viciousness. Coat too soft or too smooth and slick in appearance. Head coarse and cheeky. Undershot or overshot jaw. Level bite. Eyes light and/or large and prominent in appearance or excessively small. Loose elbows. Chest too broad or shallow in brisket. Sway or roach back. Bowed or cow-hocked hindquarters. Tail-set low. Sidegaiting. Paddling in front, or high hackney knee action. Weak rear action.

Disqualifications: Miniature Schnauzer Dogs or Bitches under 12 inches (30 cm) or over 14 inches (36 cm). Colour solid white or white patches on the body.