Scottish Terrier (Scottie) is a dog breed with an independent character.

There were two types of Scotch Terriers (now extinct) – one was taller and smooth-coated and the other was shorter with a rough-coat. Many of the better-known terrier breeds evolved from the shorter rough-coated Scotch Terriers.

The introduction of dog shows in Britain in 1859 brought out much indignation when fanciers saw all manner of terriers winning as Scottish Terriers. Eventually, authorities drew up a breed standard and in 1881, accepted the Hard-haired Scotch Terrier name. Later, the breed name was changed to the present Scottish Terrier. Loyal, loving and playful with his family, the Scottie can be scrappy with other dogs. Alert and spirited, he is also stable and steady-going. The face should wear a keen, sharp, and active expression. Both head and tail should be carried well up. The dog should look very compact, well muscled and powerful, giving the impression of immense power in a small size.

Give equal importance to height, the length of back and weight. Height at shoulder for either sex should be about 10 inches (25 cm). Generally, a well-balanced Scottish Terrier Dog of correct size should weigh from 19-22 lb. (9-10 kg), and a Bitch, from 18-21 lb. ( 8-9.5 kg). The principal objective must be symmetry and balance.

Color steel or iron gray, brindled or grizzled, black, sandy or wheaten. Allow white markings only on the chest and that too to a slight extent only. White markings are undesirable.

Steel or iron gray, brindle or grizzled, black, sandy or wheaten. Allow white markings only on the chest and that too to a slight extent only. White markings are undesirable.

Head: Skull long, of medium width, slightly domed and covered with short, hard hair. It should not be quite flat, as there should be a slight stop or drop between the eyes. Muzzle in proportion to the length of skull, with not too much taper towards the nose. Nose should be black and of good size. The jaws should be level and square. The nose projects somewhat over the mouth, giving the impression that the upper jaw is longer than the lower. The teeth should be evenly placed, having a scissors or level bite, with the former being preferable. Eyes set wide apart, small and of almond shape, not round. Colour to be dark brown or nearly black. To be bright, piercing, and set well under the brow. Ears small, prick, set well up on the skull, rather pointed but not cut. The hair on them should be short and velvety.

Neck: Moderately short, thick and muscular, strongly set on sloping shoulders, but not so short as to appear clumsy. 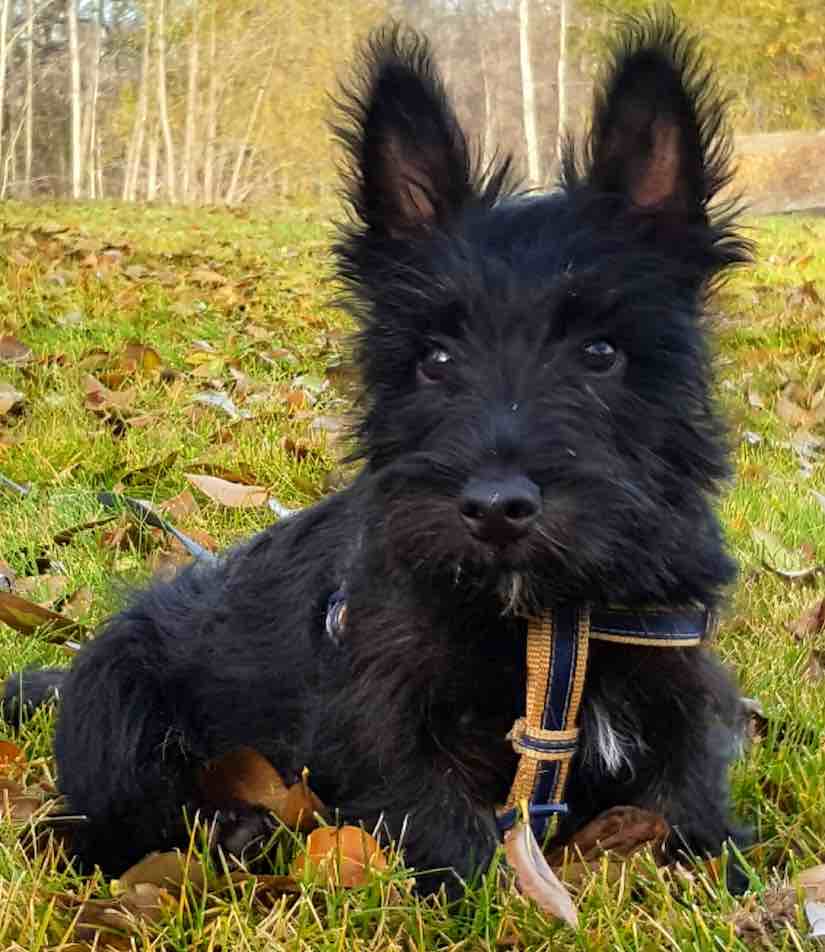 Forequarters: Shoulders sloping. Both forelegs and hind legs should be short and very heavy in bone in proportion to the size of the dog. Forelegs straight or slightly bent with elbows close to the body. Scottish Terriers should not be out at the elbows. Hindquarters: Very muscular. Stifles should be well bent and legs straight from hock to heel. Thighs very muscular. Feet round and thick with strong nails, forefeet larger than the hind feet.

Tail: Never cut and about 7 inches (18 cm) long, carried with a slight curve but not over the back.

Gait: The gait of the Scottish Terrier is peculiarly its own and is very characteristic of the breed. It is not the square trot or walk that is desirable in the long-legged breeds. The forelegs do not move in exact parallel planes – rather in reaching out incline slightly inward. This is due to the shortness of leg and width of chest. The action of the rear legs should be square and true and at the trot both the hocks and stifles should be flexed with a vigorous motion. Faults: Soft coat, round or very light eye, overshot or undershot jaw, obviously oversize or undersize, shyness, timidity, or failure to show with head and tail up are faults to be penalized. No judge should put to Winners or Best of Breed any Scottish Terrier not showing real terrier character in ring.