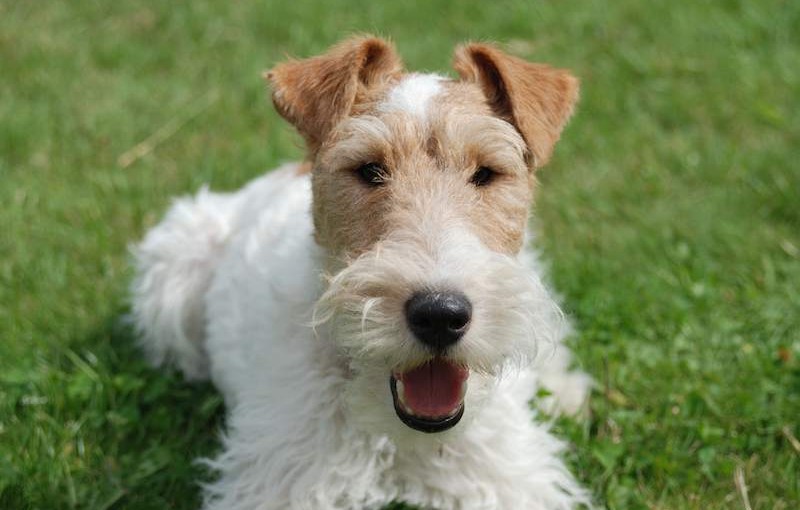 The Wire Fox Terrier as a separate dog breed was developed in England during the 19th century. Various strains of terriers, rough or smooth coated, white or coloured, were bred in hunt kennels for the purpose of going to ground against the fox. Little is known of the actual origin of the Wire Fox Terrier. The first standard for this breed was drawn up by The Fox Terrier Club (England) in 1876. General Appearance: Active and lively, bone and strength in small compass, never cloddy or coarse. Conformation to show perfect balance; in particular this applies to the relative proportions of the skull and foreface, and similarly height at withers and length of body from shoulder point to buttocks appear approximately equal. Standing like a short-backed hunter covering a lot of ground. Characteristics: Alert, quick of movement, keen of expression, on tiptoe of expectation at slightest provocation. 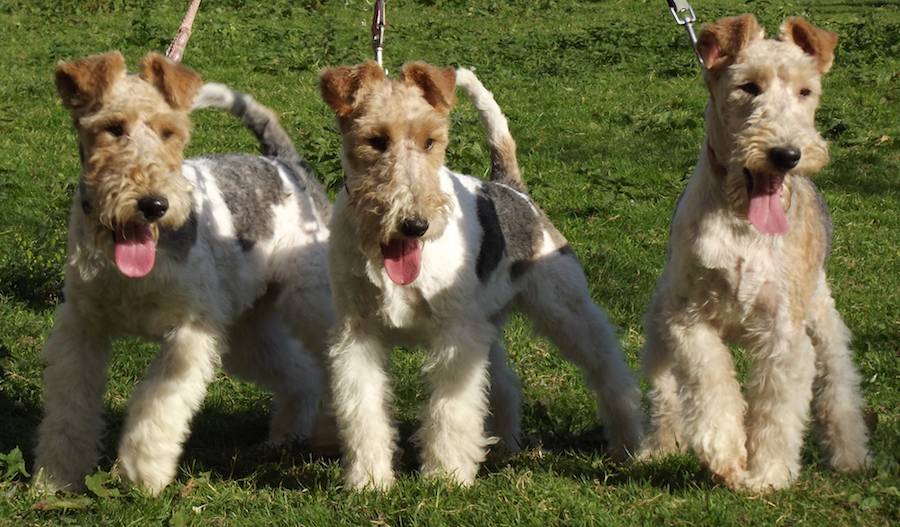 Coat: Dense, very wiry texture, 2 cm (3/4 inch) on shoulder to 4 cm (1 fi inches) on withers, back, ribs and quarters with under coat of short, softer hair. Back and quarters harsher than sides. Hair on jaws crisp and of sufficient length to impart appearance of strength to foreface. Leg hair dense and crisp.

Head: Topline of skull almost flat, sloping slightly and gradually decreasing in width towards eyes. Little difference in length between skull and foreface. If foreface is noticeably shorter head looks weak and unfinished. Foreface gradually tapering from eye to muzzle and dipping slightly at its juncture with forehead but not dished or falling away quickly below eyes where it should be full and well made up. Excessive bony or muscular development of jaws undesirable and unsightly. Full and rounded contour of cheeks undesirable. Nose black. Eyes: Dark, full of fire and intelligence, moderately small, not prominent. As near circular in shape as possible. Not too far apart nor too high in skull nor too near ears. Light eyes highly undesirable. Ears: Small, V-shaped, of moderate thickness, flaps neatly folded over and dropping forward close to cheeks. Top line of folded ears well above level of skull. Prick, tulip or rose ears highly undesirable. Mouth: Jaws strong with perfect, regular and complete scissor bite, i.e. upper teeth closely overlapping lower teeth and set square to the jaws.

Neck: Clean, muscular, of fair length, free from throatiness, broadening to shoulders, presenting a graceful curve when viewed from side.

Forequarters: Seen from front the shoulders slope steeply down from junction with neck towards points which should be fine; viewed from side, long and well laid back and sloping obliquely backwards. Withers always cleancut. Chest deep, not broad. Viewed from any direction, legs straight, bone strong right down to feet. Elbows perpendicular to body, working free of sides, carried straight when moving.

Hindquarters: Strong, muscular and free from droop or crouch. Thighs long and powerful. Stifles well bent, turning neither in nor out. Hocks well let down, upright and parallel when viewed from rear. Combination of short second thigh and straight stifle highly undesirable. Feet: Round, compact with small, tough and well cushioned pads, toes moderately arched. Turning neither in nor out.

Faults: Any departure from the foregoing points should be considered a fault and the seriousness with which the fault should be regarded should be in exact proportion to its degree and its effect upon the health and welfare of the dog. Male animals should have two apparently normal testicles fully descended into the scrotum.