Cavalier King Charles Spaniel is a much-admired Royal Spaniel. Descended from the Toy Spaniels of Europe, this dog breed was known as the comforter or Spaniel Gentle and first appeared in the courts of England with the reign of Queen Mary I. The breed, which appears in many of the great paintings of the Masters, received its name from King Charles II. It became virtually extinct in the Victorian and Edwardian eras, as short-nosed breeds took the fore. By 1923 the King Charles Spaniel (today’s English Toy Spaniel) with its flat nose had replaced the old-type Toy Spaniel. In 1926 the incentive for the revitalization of the old-type Toy Spaniel was provided by Mr. Roswell Eldridge, an American who offered prizes of 25 pounds for the Best Dog and Best Bitch of this type at Crufts. The name Cavalier was added when the Cavalier King Charles Spaniel Club was founded in 1928. Image: Young King Charles II (left) of England with his cavaliers. Three Eldest children of King Charles I with spaniels of the era. This is a 17th Century painting done by Anthony van Dyck (1599–1641).

Size: Height 30-33 cm (12-13 inches). Weight proportionate to height 5 – 8 kg (12-18 lbs.). Slight variations permissible. A small, well-balanced dog well between these heights and weights is desirable. Overall type and quality should not be sacrificed for size alone. A weedy specimen is to be penalized as severely as a coarse one.

Coat: Long, silky and free from curl, though a slight wave is permissible. Feathering on ears, legs and tail should be long, and the feathering on the feet is a feature of the breed. It is common and permissible for bitches to carry less coat than dogs. No trimming, scissoring, clipping or artificial colouring is allowed and this should be severely penalized.

Blenheim: Bright chestnut red markings well broken up on a pearly white ground. The red on the head must extend around the eyes as well as down over the ears. A pure white muzzle is preferred. There must be a distinct white blaze between the eyes. Between the ears may be the lozenge or spot unique to the Blenheim, which is a highly desirable, but not essential, characteristic. Tricolour: Jet black markings well broken up on a pearly white ground. The black on the head must extend around the eyes as well as down over the ears. There must be a distinct white blaze between the eyes. A pure white muzzle is preferred. Rich tan markings appear over the eyes, on cheeks, inside ears, under the tail and around the vent. Tan should appear inside the legs where it is adjacent to black. 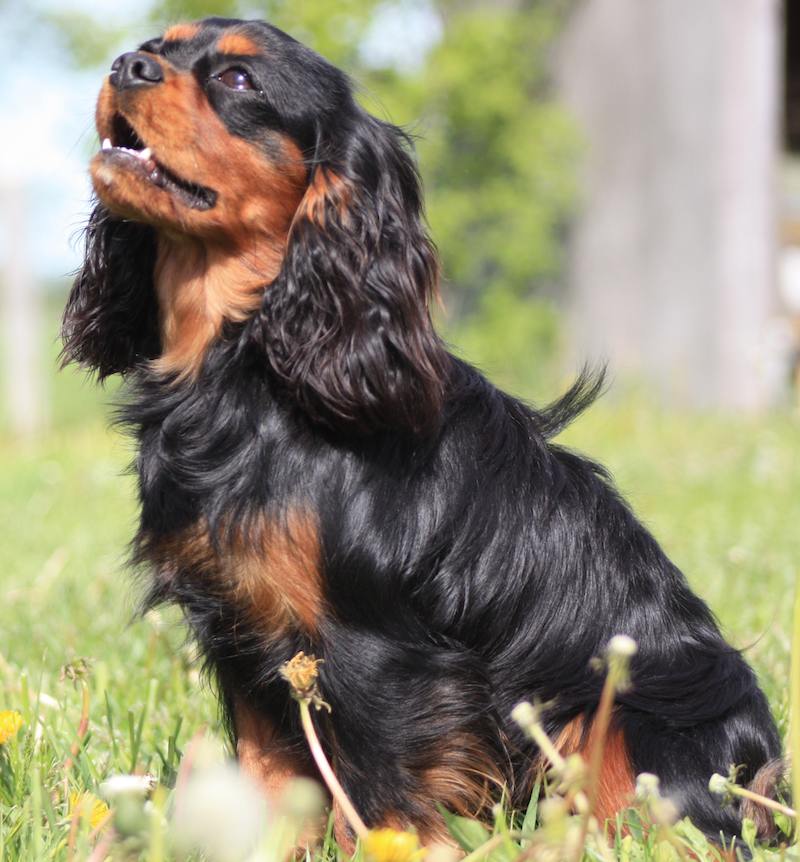 Black and Tan: Jet black with rich tan markings over the eyes, on cheeks and muzzle, inside the ears, on throat and chest, on forelegs from knees to toes, on the inside of the hind legs also extending from hocks to toes, on the underside of the tail and surrounding the vent. White marks are undesirable. Head: Almost flat between the ears, without dome. Stop moderate. Length from base of stop to tip of nose about 1-1/2 inches (4 cm.). Nostrils should be well developed and the pigment black. Lack of stop or too deep a stop are to be penalized equally. Muzzle: Tapering slightly to the nose. Lips well covering and well cushioned but not hound-like. There should be cushioning beneath the eyes, which contributes much to the sweet, gentle expression characteristic of the breed. Mouth: Teeth strong and even, meeting in a scissors bite. Level and undershot mouths are to be discouraged. However, a slightly undershot bite in an otherwise wellbalanced head with the correct sweet expression should not be penalized in favour of a scissors or level bite with a plain head or hard expression. Eyes: Should be large, round and set well apart. Colour should be a warm dark brown, giving a lustrous, limpid look. Eye rims should be dark. Small, light or bulging eyes, or a white ring surrounding the iris are very undesirable. Ears: set high, but not close to the top of the head. Leather long with pleanty of silky feathering, and wide enough so that when the dog is alert, the ears fan slightly forward to frame the face.

Forequarters: Forelegs straight and set well under the dog. Bone moderate. Elbows close to the sides. Shoulders well laid back. Pasterns strong and feet compact, well-feathered and with well-cushioned pads.

Body: Short-coupled with ribs well sprung but not barreled. Chest moderately deep leaving ample heart room. Back level. Slightly less body at the flank than at the last rib, but with no tucked-up appearance. Bitches may be slightly longer at the loin.

Hindquarters: Hind legs moderately muscled, well angulated at the stifles. Hocks relatively short and at right angle to the ground when standing. Hind legs should parallel each other from hock to heel with no tendency to long, cow or sickle hocks.

Tail: Set on so as to be carried level with the back. Tail should be in constant motion while the dog is moving. Docking is optional, leaving 2/3 of the tail and the tail must balance the body. A white tip must be left on the tails of Blenheims and Tricolours.

Gait: The Cavalier should be moved on a loose lead and never strung up. Free moving and elegant with good reach in front and sound drive from the rear. Head carried slightly forward on the move. Back level and tail carried straight behind as an extension of the line of the back Good length of stride from the side. Front and rear should move straight and true.

Faults: Any departure from the foregoing points should be considered a fault, and the seriousness with which the fault should be regarded should be in proportion to its degree. ; Nervousness, shyness and aggression in adults. ; Trimming, scissoring or artificial colouring. ; Lack of a white blaze in Blenheim or Tricolour. ; White marks on Ruby or Black and Tan. ; Small, light or bulging eyes, or a white rim around the iris. ; Long, cow or sickle hocks. ; Tail carried well above the topline.

Disqualifications: Colours other than the four above. Clown faces (white around one or both eyes or white ears.) Tricolours and Black and Tans lacking tan markings. Aggression.