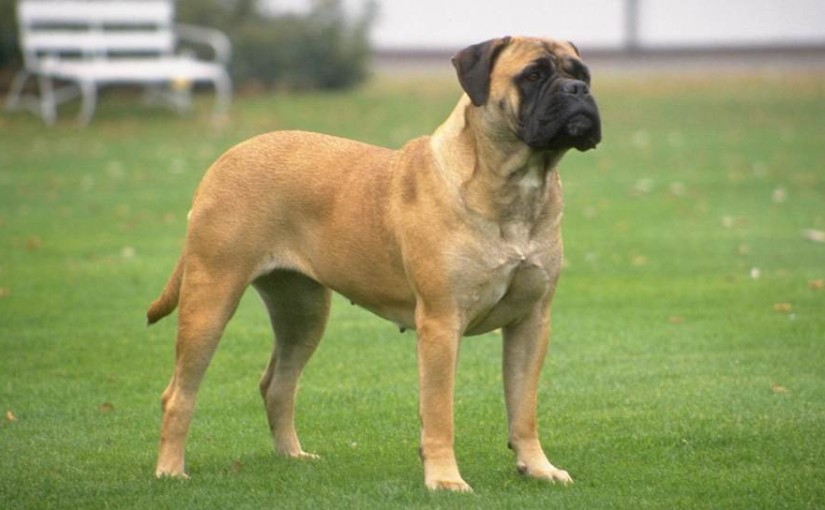 The Bullmastiff was developed in England by gamekeepers for protection against poachers. The foundation breeding of the modern pure-bred was 60 per cent Mastiff and 40 per cent Bulldog. It is a guard and companion dog, and should be loyal, obedient, and thus suitable for training.

General Appearance: The Bullmastiff is a powerfully built, symmetrical dog, showing great strength and activity, but not cumbersome; upstanding and compact in appearance, with breadth and depth of skull and body, the latter set on strong, sturdy, well-boned legs. The height measured vertically from the ground to the highest point of the withers, should nearly equal the length measured horizontally from the forechest to the rear part of the upper thigh, and should slightly exceed the height at the hips. Bitches are feminine in appearance, of somewhat lighter bone structure than the male, but should still convey strength. Serious Faults: Lack of balance. Poor or light bone structure. Minor Faults: Lack of muscular development. Ranginess. Temperament: The Bullmastiff should be bold, fearless and courageous, a dependable guard dog; alert and intelligent. Serious Faults: Viciousness. Shyness. (Such dogs should not be used for breeding.) Minor Faults: Apathy and sluggishness.

Coat and Colour: Coat short and dense, giving good weather protection. Serious Faults: Long, soft coat. Minor Faults: “Staring” coat, which means poor condition. Colour: any shade of red, fawn or brindle, but the colour to be pure and clear. A small white marking on chest permissible but not desirable. Serious Faults: White markings other than on chest. Minor Faults: Black shading on body, legs or tail (of reds or fawns).

Bullmastiff’s Head: The skull should be large, equal in breadth, length and depth, with a fair amount of wrinkle when the dog is interested; well-developed cheeks. The skull in circumference may measure the height of the dog. Forehead flat, with furrow between the eyes. Stop definite.Serious Faults: Narrow skull. Shallow skull. Minor Faults: Domed forehead. Insufficient stop. Muzzle should be short, broad and deep, in the same proportion as the skull. The distance from the tip of the nose to the stop should not exceed one-third of the length from the tip of the nose to the centre of the occiput. Broad under the eyes and nearly parallel in width to the end of the nose; blunt and cut off square, appearing in profile in a plane parallel to the line of the skull. A black mask is essential. The nose should be black, flat, and broad with widely spreading nostrils when viewed from the front. Flews not too pendulous. The lower jaw broad. Serious Faults: Muzzle too long, too narrow, pointed or lacking in depth. Muzzle too short; nostrils set on top; nose pointed, upturned or laid back; lower jaw narrow. Minor Faults: Lack of wrinkle; flews too pendulous. Teeth preferably level bite or slightly undershot. Canine teeth large and set wide apart; other teeth strong, even and well placed. Serious Faults: Teeth overshot. Teeth more than 1/4 inch (.6 cm) undershot. Dry mouth. Minor Faults: Irregular or poorly placed teeth. Small teeth. Eyes dark or hazel, and of medium size; set apart the width of the muzzle. Minor Faults: Light eyes. Eyes too close together, too large, too small. Ears V-shaped and carried close to the cheeks; set on wide and high, level with the occiput, giving a square appearance to the skull which is most important. They should be darker in colour than the body, and the point of the ear, when alert, should be level with the eye. Serious Faults: Rose ears. Minor Faults: Ears too long or too short. Lack of darker colour.

Forequarters: Proper angulation and proportionate bone lengths of the forequarters are very important. The shoulder bone should slope forward and downward from the withers at an angle of 45 degrees from the vertical. The humerus (upper arm) should form a right angle with the shoulder bone, 45 degrees from the vertical. The shoulder bone and humerus should be approximately equal in length. The length of the foreleg from the ground to the elbow should be a little more than half the distance from the ground to the withers, approximately 52 per cent. The shoulders and upper arms should be muscular and powerful, but not overloaded. Forelegs powerful, with round heavy bone, vertical and parallel to each other, set well apart; elbows set close to the body. Pasterns straight and strong. Feet of medium size, not turning in or out, with round toes, well arched. Pads thick and tough. Nails black. Serious Faults: Lack of proportion in bone. Shoulder too steep. Shoulders overloaded. Elbows turned in or out. Lack of bone in forelegs. Forelegs bowed. Weak pasterns. Splay feet. Minor Faults: Feet turned in or out. White nails.

Body and Tail: Body compact. Chest wide and deep, with ribs well sprung and well set down between the forelegs. Back short and level. Loins wide, muscular; croup slightly arched, with fair depth of flank. Serious Faults: Body too long. Shallow chest. Narrow chest. Lack of ribspring. Sway back. Roach back. Tip of hip bone higher than withers. Minor Faults: Too much tuck-up. Tail set on high, strong at the root and tapering to the hocks. It may be carried straight or curved. Serious Faults: Screw tail. Crank tail. Tail set too low. Minor Faults: Tail carried hound fashion. Too long. Too short. Too heavily coated.

Hindquarters: It is important that structure, angulation, and proportionate bone lengths of the hindquarters be in balance with the forequarters. The pelvis (hip bone) should slope backward and downward from the spine at an angle of 30 degrees. The femur (upper thigh bone) should form a right angle with the pelvis. The lower thigh bone (stifle) should set at an angle of 45 degrees to the vertical. The pelvis and femur should be approximately equal in length. The ratio of the lengths of the femur, to the tibia/fibula, to the hock should be approximately as 4:5:3. The length of the lower leg, from the ground to the hock joint, should be a little less than 30 per cent of the distance from the ground to the top of the hip bones. The lower leg should be vertical to the ground. The hips should be broad, in balance with shoulders and rib cage. Hind legs strong and muscular, with well-developed second thighs, denoting power and activity, but not cumbersome, set parallel to each other and well apart, in balance with forelegs and body. Feet as in forequarters. Serious Faults: Lack of proportion in bone. Poor angulation at hip bone. Narrow hip structure. Stifle too straight or over-angulated. Cow-hocks. Bowed hind legs. Splay feet. Minor Faults: Feet turned in or out. White nails.

Gait: The gait should be free, balanced and vigorous. When viewed from the side the dog should have good reach in the forequarters and good driving power in the hindquarters. The back should be level and firm, indicating good transmission from rear to front. When viewed from the front (coming toward) or from the rear (going away), at a moderate pace, the dog shall track in two parallel lines, neither too close together nor too far apart, so placed as to give a strong well-balanced movement. The toes (fore and hind) should point straight ahead. The dog should be moved in the ring at a sufficient speed to show fluidity of movement and not at a slow walk. Serious Faults: Rolling, padding or weaving when gaited. Any crossing movement, either front or rear. Stilted and restricted movement. (Bullmastiffs with structural weakness as evidenced by poor movement should not be used for breeding.)