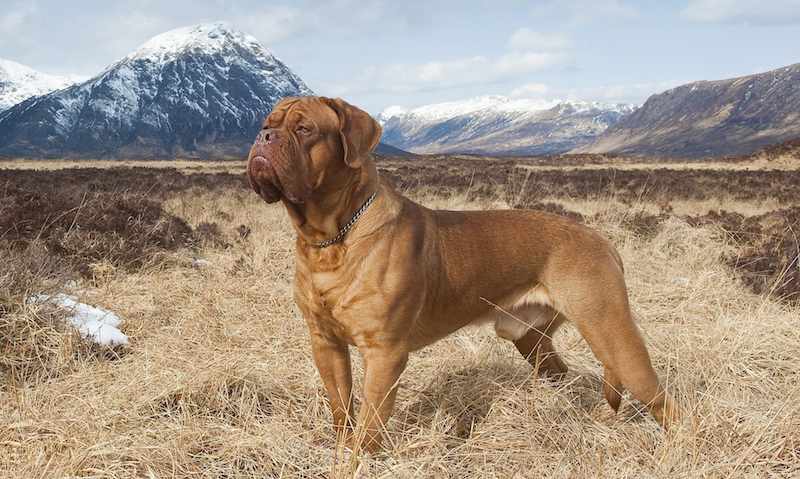 Dogue de Bordeaux is one of the most ancient French breeds, probably a descendant of the Alas and, in particular, the alan vautre of which Gaston Phebus (or Febus), Count of Foix, wrote in the 14th century, in his Livre de Chasse that “he holds his bite stronger than three sighthounds”. The word “dogue” appeared at t the end of the 14th century.

In the middle of the 19th century these ancient dogues were hardly renowned outside the region of Aquitaine. They were used for hunting large game such as boar, for fighting, for the guarding of houses and cattle and in the service of butchers. In 1863 the first French dog show took place in Paris in the Jardin d’Acclimatation. The Dogues de Bordeaux were entered under their present name. There have been different types: The Toulouse type, the Paris type and the Bordeaux type, which is the origin of today’s Dogue. Photo: This ancient French mastiff breed first came to the attention when it starred in the hit movie Turner and Hooch with Tom Hanks.

General Appearance: Typical concave lined brachycephalic molossoid. The Dogue de Bordeaux is a very powerful dog, with a very muscular body yet retaining a harmonious general outline. It is built rather close to the ground, the distance sternum-ground being slightly less than the depth of the chest. Stocky, athletic and imposing, it has a very dissuasive aspect. 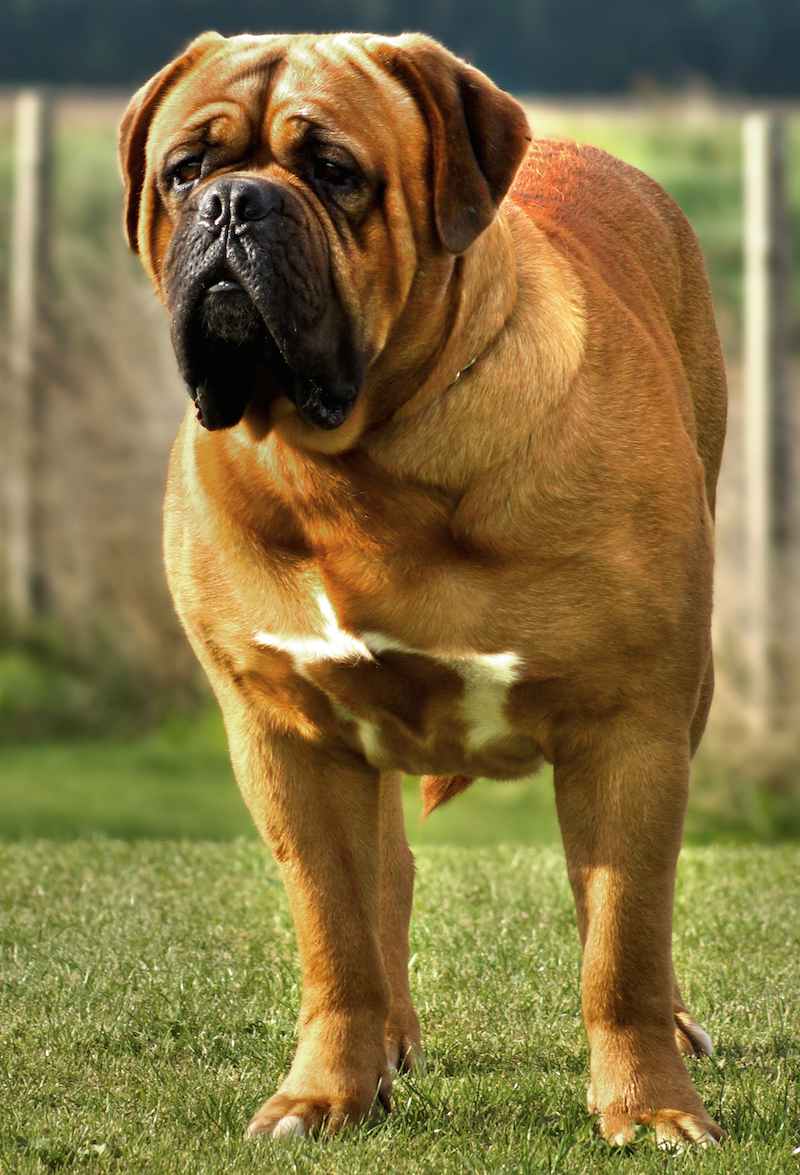 Dogue de Bordeaux Temperament: An ancient fighting dog, the Dogue de Bordeaux is gifted for guarding, which it assumes with vigilance and great courage but without aggressiveness. A good companion, very attached to its master and very affectionate. Calm balanced with a high stimulus threshold. The male normally has a dominant character.

Size: Height should more or less correspond to the perimeter of the skull Height at withers: For Males: 60-68 cm For Females: 58-66 cm 1 cm under and 2 cm over will be tolerated.

Dogue de Bordeaux Coat & Colour Skin: Thick and sufficiently loose fitting, without excessive wrinkles. Hair: Fine, short and soft to the touch Colour: Self-coloured, in all shades of fawn, from mahogany to Isabella. A good pigmentation is desirable. Limited white patches are permissible on the forechest and the extremities of the limbs. 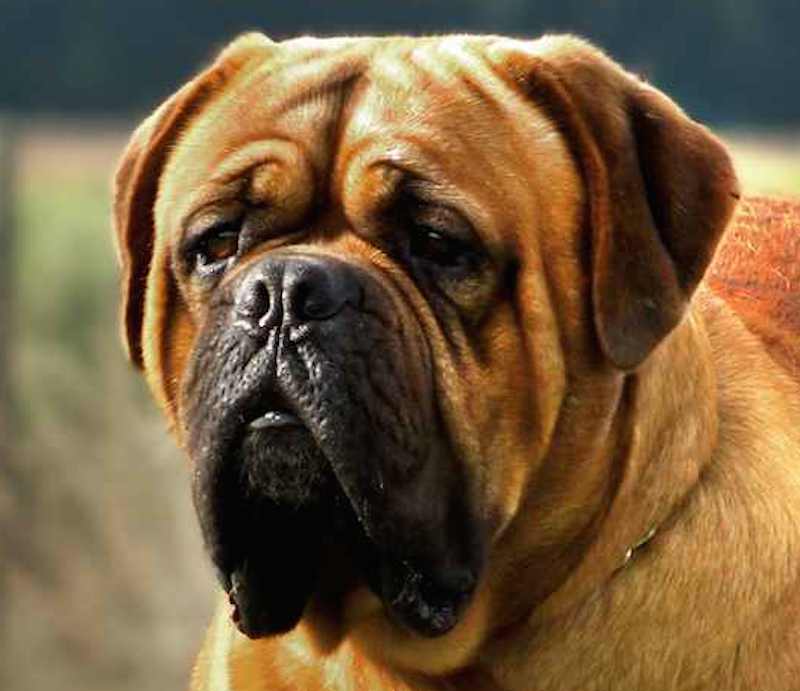 Black Mask: The mask is often only slightly spread out and must not invade the cranial region. There may be slight black shading on the skull, ears, neck and top of body. The nose is black. 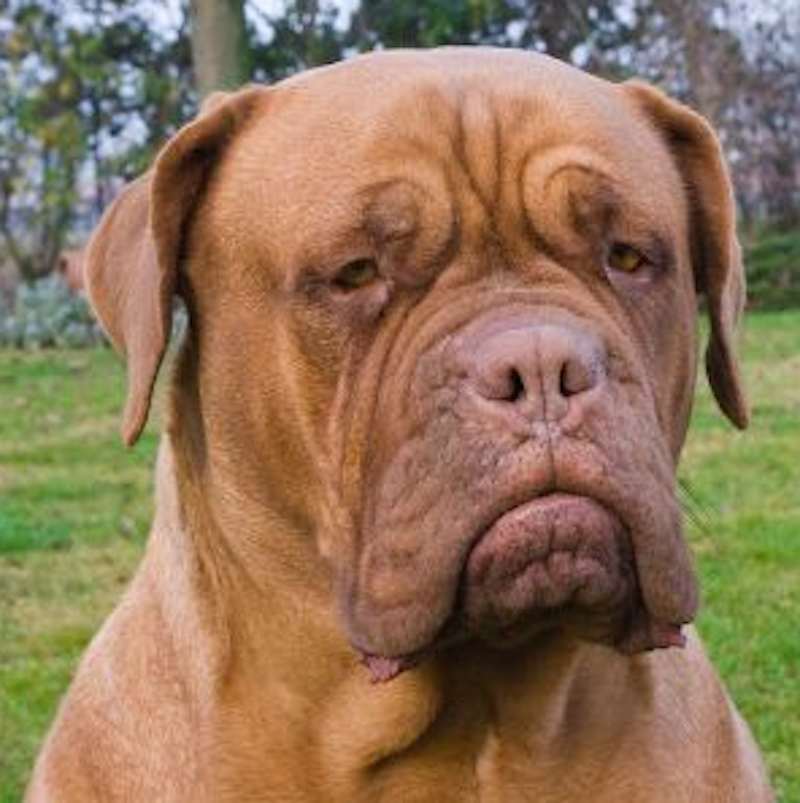 Brown Mask: (used to be called red or bistre). The nose is brown; the eyerims and edges of the lips are also brown. There may be non-invasive brown shading; each hair having a fawn or sandy zone and brown zone. In this case the inclined parts of the body are a paler colour. 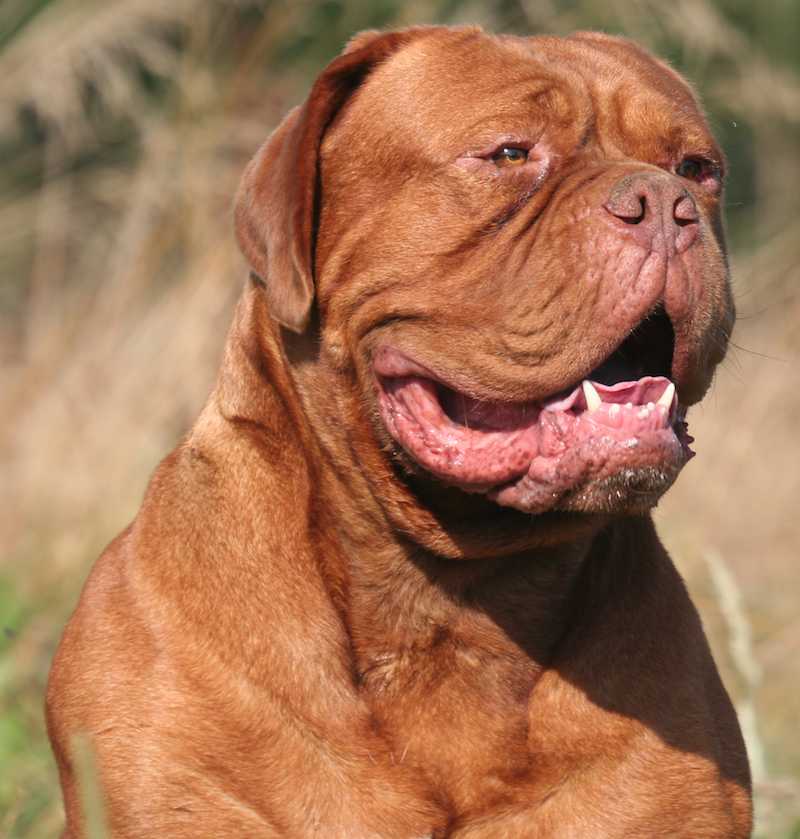 Dogue with no mask

No Mask: The coat is fawn: the skin appears red (also formerly called “red mask”). The nose can be reddish.

Dogue de Bordeaux Head: Voluminous, angular, broad, rather short, trapezoid when viewed from above and in front. The longitudinal axes of the skull out of the bridge of nose are convergent (towards the front). The head is furrowed with symmetrical wrinkles, each side of the median groove. These deep ropes of wrinkle are mobile depending on whether the dog is attentive or not. The wrinkle which runs from the inner corner of the eye to the corner of the mouth is typical. If present, the wrinkle running from the outer corner of the eye to either the corner of the mouth or the dewlap should be discreet. Skull: In the male: the perimeter of the skull measured at the level of its greatest width corresponds roughly to the height at the withers. In bitches: it may be slightly less. Its volume and shape are the consequences of the very important development of the temporal, supra-orbital arches, zygomatic arches and the spacing of the branches of the lower jaw. The upper region of the skull is slightly convex from one side to the other. The frontal groove is deep, diminishing towards the posterior end of the head. The forehead dominates the face but does not overhand it. However, it is still wider than high. Stop: Very pronounced, almost forming a right angle with the muzzle (95 degrees to 100 degrees). Nose: Broad, well opened nostrils, well pigmented according to the colour of the mask. Upturned nose permissible but not if it is set back towards the eyes. Muzzle: Powerful, broad, thick, but not fleshy below the eyes, rather short, upper profile very slightly concave, with moderately obvious folds. Its width hardly decreasing towards the tip of the muzzle, when viewed from above it has the general shape of a square. In relation to the upper region of the skull, the line of the muzzle forms a very obtuse angle upwards. When the head is held horizontally the tip of the muzzle, truncated, thick and broad at the base, is in front of a vertical tangent to the anterior face of the nose. Its perimeter is almost two thirds of that of the head. Its length varies between one third and minimum of one quarter of the total length of the head, from the nose to the occipital chest. The limits stated (maximum one third and minimum of one quarter of the total length of the head) are permissible but not sought after, the ideal length of the muzzle being between these two extremes. Jaws: Jaws powerful, broad. Undershot (the undershot condition being a characteristic of the breed). The back of the lower incisors is in front of and not in contact with the front face of the upper incisors. The lower jaw curves upwards. The chin is well marked and must neither overlap the upper lip exaggeratedly nor be covered by it. Teeth: Strong, particularly the canines. Lower canines set wide apart and slightly curved. Incisors well aligned especially in the lower jaw where they form an apparently straight line. Lips: Upper lip thick, moderately pendulous, rectractile. When viewed in profile it shows a rounded lower line. It covers the lower jaw on the sides. In front the edge of the upper lip is in contact with the lower lip, then drops on either side thus forming an inverted wide V. Cheeks: Prominent, due to the very strong development of the muscles. Eyes: Oval, set wide apart. The space between the two inner corners of the eyelids is equal to about twice the length of the eye (eye opening). Frank expression. The haw must not be visible. Colour: hazel to dark brown for a dog with a black mask, lighter colour tolerated but not sought after in dogs with either a brown mask or without a mask. Ears: Relatively small, of a slightly darker colour than the coat. At its set on, the front of the base of the ear is slightly raised. They must fall down, but not hang limply, the front edge being close to the cheek when the dog is attentive. The tip of the ear is slightly rounded; it must not reach beyond the eye. Set rather high, at the level of the upper line of the skull, thus appearing to accentuate its width even more. Dogue de Bordeaux Neck: Very strong, muscular, almost cylindrical. This skin is supple, ample and loose. The average circumference almost equals that of the head. It is separated from the head by a slightly accentuated transversal furrow, slightly curved. Its upper edge is slightly convex. The well defined dewlap starts at the level of the throat forming folds down to the chest, without hanging exaggeratedly. The neck, very broad at its base, merges smoothly with the shoulders.

Forequarters: Strong bone structure, legs very muscular. Shoulders: powerful, prominent muscles. Slant of shoulder-blade medium (about 45 degrees to the horizontal), angle of the scapular-humeral articulation a little more than 90 degrees. Upper Arms: very muscular. Elbows: In the axis of the body, neither too close to the ribcage nor turned out. Forearms: viewed from the front, straight or inclining slightly inwards thus getting closer to the median plane, especially in dogs with a very broad chest. Viewed in profile, vertical. Metacarpus (Pastern): viewed in profile, slightly sloping. Viewed from the front sometimes slightly outwards compensating for the slight inclination of the forearms inwards. Forefeet: strong. Toes tight, nails curved and strong, pads well developed and supple: the Dogue is well up on his toes despite his weight.

Body: Topline: well sustained. Withers: well marked. Back: broad and muscular. Loin: broad. Rather short and solid. Croup: moderately sloping down to the root of the tail. Chest: powerful, long, deep broad, let down lower than the elbows. Broad and powerful forechest whose lower line (inter-axillae) is convex towards the bottom. Ribs well let down and well sprung but not barrel shaped. The circumference of the chest must be between 25 cm to 35 cm greater than the height at the withers. Underline the belly: Curved from the deep brisket to the rather tucked up, firm abdomen, being neither pendulous nor too tucked up.

Tail: Very thick at the base, its tip preferably reaching the hock and not below. Carried low, it is neither broken nor kinked but supple. Hanging when the dog is at rest, generally rising by 90 degrees to 120 degrees from that position when the dog is in action, without curving over the back or being curled.

Gait: Quite supple for a molossoid. When walking the movement is free and supple, close to the ground. Good drive from the hindquarters, good extension of the forelegs, especially when trotting, which is the preferred gait. When the trot quickens, the head tends to drop, the topline inclines towards the front, and the front feet get closer to the median plane while striding out with a long reaching movement of the front legs. Canter with rather important vertical movement. Capable of good speed over short distances by bolting along close to the ground. Faults: Any departure from the foregoing points should be considered a fault and the seriousness with which the fault should be regarded should be in exact proportion to its degree and its effect on the health and welfare of the dog.

Bulldoggy hypetype: flat skull, muzzle measuring less than a quarter of the total length of the head. Swollen fold (roll) behind the nose. Important fold around the head.

Fused but not deviated vertebrae of the tail

Forefeet turning outwards too much

Angle of hock too closed, dog standing under himself behind

White on tip of tail or on the front part of the forelegs, above the carpus (wrist) and the tarsus (hock) or white, without interruption, on the front of the body from the forechest to the throat.

Long, narrow head with insufficiently pronounced top, with a muzzle measuring more than a third of the total length of the head (lack of type in head)

Muzzle parallel to the top line of the skull or downfaced, Roman nose

Canines constantly visible when the mouth is closed

Tongue constantly hanging out when the mouth is closed

Fiddle front and down on pasterns

Angle of the hock open towards the rear (inverted hock)

White on the head or body, any other colour of the coat than fawn (shaded or not) and in particular brindle or solid brown called “chocolate” (each hair being entirely brown)

Any dog clearly showing physical or behavioural abnormalities shall be disqualified.