Giant Schnauzer dog breed is generally considered to have originated in the mountains of Bavaria in the 1810’s. Rather than being bred for a specific purpose, the Giant Schnauzer was bred for versatility. This breed has been used over the years as a drover’s dog, a brewery guard, a cart dog, a herding dog, and a superlative police dog.

General Appearance: The Giant Schnauzer is a robust, more heavy-set than a slender dog, square in build. He should resemble a larger and more powerful version of the Standard Schnauzer. The sound, reliable temperament, rugged build, and dense, weather-resistant wiry coat make for one of the most useful, powerful, and enduring working breeds. 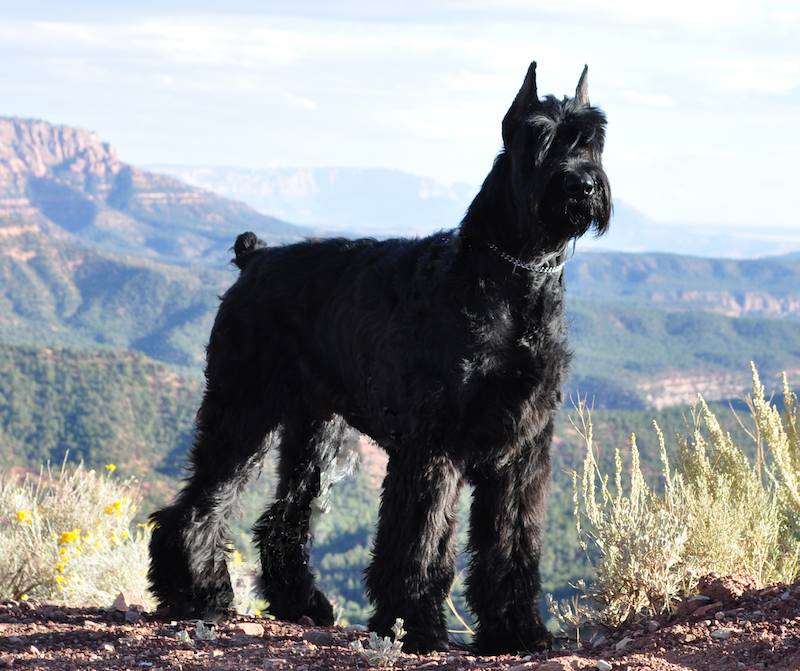 Giant Schnauzer Temperament: Combines spirit and alertness with intelligence and extreme reliability; amiable in repose and a commanding figure when aroused. Shy or vicious Giant Schnauzers should be dismissed from the ring.

Giant Schnauzer Size: Height at the withers for males is 25-1/2 – 27-1/2 inches (65-70 cm); for females 23-1/2 – 25-1/2 inches (60-65 cm), mediums preferred. Size alone should never take precedence over type, balance, soundness, and proper temperament. It should be noted that too small dogs generally lack the power and too large dogs the agility and maneuverability desired in a working dog.

Coat and Colour: Coat close, strong, hard and wiry, shorter on ears, skull, throat, and under tail. Slightly longer on legs and under chest, with beard and eyebrows adding to the rectangular appearance of the head. The eyes are not obscured by too-long eyebrows. The undercoat is soft and dense. Colour may be black, or salt and pepper. 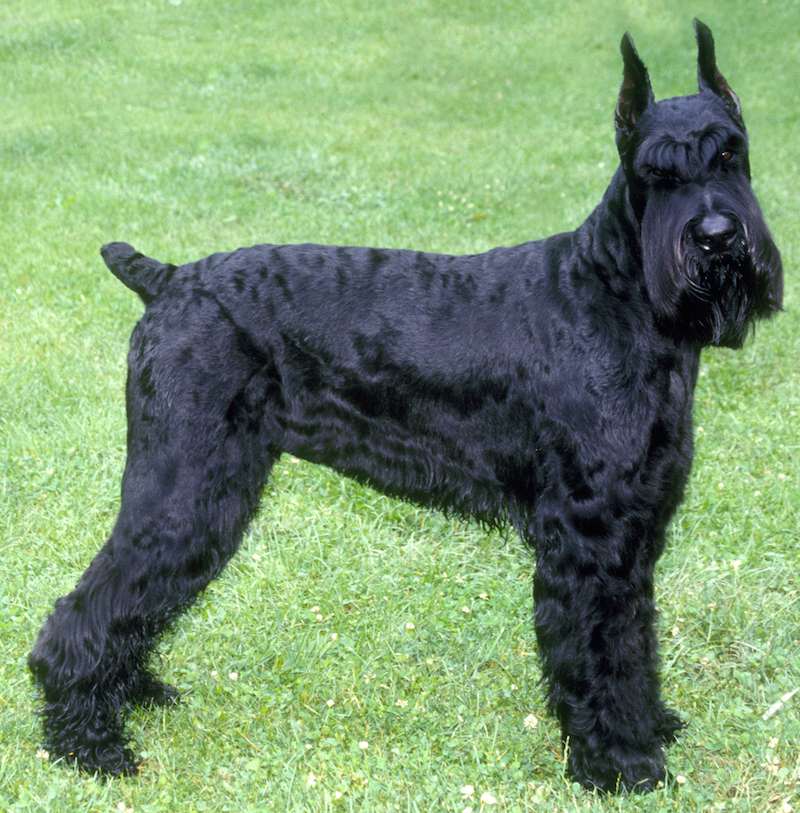 Salt and pepper Giant Schnauzer: Outer coat to a combination of banded hairs (white and black) and some solid black and solid white hairs, appearing as a medium to dark grey, peppering evenly distributed with no trace of patterning, and a grey undercoat. Dark facial mask to emphasize the expression. Eyebrows, inside ears, whiskers, cheeks, throats, chest, legs, and under tail are lighter in colour but include peppering.

Head: Strong and elongated, gradually narrowing from the ears to the tip of the powerful, ferreting snout, rectangular in appearance and in proportion to the sex and substance of the dog. The length of the head is one-half the length of the back from withers to the base of the tail. The masseters (cheek muscles) are strongly developed, though no strongly-marked cheek form is to disturb the rectangular appearance of the head and beard. The skull is flat and unwrinkled, in width not more than two-thirds the length. Occiput not prominent. Muzzle is well filled under the eyes, both parallel and equal in length to the skull, ending in a moderately blunt wedge. The lips are tight, not overlapping, black, and the nose is large, black and full. The tongue may be either pink, or pink with black or grey spots. Bite: a full complement of sound, white teeth (6/6 incisors, 2/2 canines, 8/8 premolars, 4/6 molars) with scissors bite. The upper and lower jaws are powerful and well formed. Eyes: medium sized, dark, oval, turned forward with tight lids. Ears: small and V-shaped button ears, of moderate thickness, set high on the head, and dropping forward closely to the cheek, or cropped, evenly cut, not overly long, with as little bell as possible, placed high and carried erect in excitement with the inner edges parallel.

Neck: Strong and well arched, of moderate length, blending cleanly into the shoulders, with skin close-fitting at the throat, in harmony with the dog.

Forequarters: Shoulders slanting, well angled, and flat, but strongly muscled, well set on, giving no appearance of a terrier front. The upper end of the scapulae (shoulder blades) are, from the side, in a vertical line above the elbows. The angle between the scapula and humerus (upper arm) is 90 degrees. Elbows are set close to the body. Forelegs from the elbow down, seen from all sides, are vertical without any curve, with strong pasterns and good bone. Feet are short, round, extremely compact, with close, arched toes (cat’s paws), dark nails, and thick, tough pads.

Body: Compact, substantial, short-coupled, and strong, with great power and agility. Topline is short, strong and straight, sloping moderately to the rear, extending into a slightly rounded croup. Chest is moderately broad with visible, strong sternum (breastbone), reaching at least down to the elbow, and slowly tapering up and back to a moderate tuck-up. The loin (distance from the last rib to the pelvis) is short, giving the impression of a compact body. The length of the dog from sternum to point of rump is equal to the height at the withers.

Hindquarters: Strongly muscled, in balance with the forequarters; femurs (upper thighs) are strong and slanting, the stifles well bent, with tibiae (second thighs) approximately parallel to the extension of the upper neckline. The hocks are short, perpendicular to the ground while the dog is standing, and, from the rear, parallel to each other. The hind feet are slightly smaller than the forefeet. The hindquarters do not appear overbuilt or higher than the withers.

Tail: Set moderately high, carried high in excitement, from 2-4 inches long (5-10 cm), should be docked to the second or third joint.

Gait: The trot is free, balanced, and vigorous, with good reach in the forequarters and good driving power in the hindquarters. When moving at a fast trot a properly built dog will single track. Back remains strong, firm, and flat. Movement from the front and rear should be clean and true, the legs being thrown neither in nor out.

Faults: Soundness (both temperament and conformation) and type are of prime importance. The foregoing description is that of the ideal Giant Schnauzer. Any deviation from the standard must be penalized to the extent of the deviation. The Giant Schnauzer should always be considered and judged as a working dog.

Disqualifications: Overshot, undershot. The judge should dismiss from the ring any shy or vicious Giant Schnauzers. Shyness: A dog should be judged fundamentally shy if, refusing to stand for examination, it repeatedly shrinks away from the judge; if it fears unduly any approach from the rear; if it shies to a marked degree at sudden and unusual noises.

Viciousness: A dog that attacks or attempts to attack either the judge or its handler is definitely vicious. An aggressive or belligerent attitude toward other dogs, while not desirable, shall not be deemed viciousness.