This dog breed originated in Newfoundland from dogs indigenous to the island, and the big black bear dogs introduced by the Vikings in 1001 A.D. With the advent of European fishermen, a variety of new breeds helped to shape and re-invigorate the breed, but the essential characteristics of the Newfoundland dog remained. By the time colonization was permitted in 1610, the distinct physical characteristics and mental attributes had been established in the breed for all time. The large size, heavy coat and webbed feet permit him to withstand the rigours of the extreme climate and sea while serving both as lifeguard and draught animal. 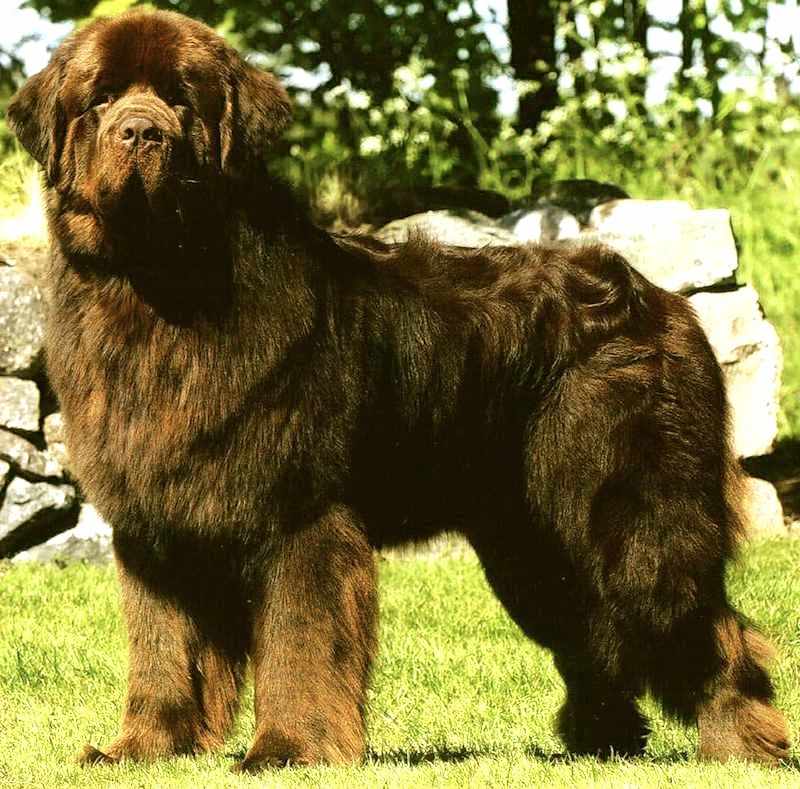 Newfoundland Temperament: The Newfoundland’s expression is soft and reflects the character of the breed–benevolent, intelligent, dignified but capable of fun. He is known for his sterling gentleness and serenity. Any show of ill temper or timidity is to be severely faulted. Bad temperament is a disqualification.

Coat and colour: The Newfoundland has a water resistant double coat. The outer coat is moderately long and straight with no curl. A slight wave is permissible. When rubbed the wrong way, the coat tends to fall back into place. The undercoat is soft and dense, but less dense during summer months, but always found to some extent on the rump and chest. A completely open coat is to be faulted. The hair on the head, muzzle, and ears is short and fine. The front and rear legs are feathered. The tail is completely covered with long dense hair, but does not form a flag. A short, flat, smooth coat (Labrador Retriever type) is a disqualification.

The traditional colour is black. A sunburned black is permissible. White markings on chest, toes and/or tip of tail are permissible. Markings of any colour other than white are most objectionable and the dog is to be disqualified. The Landseer Newfoundland is white with black markings, and is of historical significance to the breed. The preferred pattern of markings for the Landseer is black head with white blaze extending onto the muzzle, black saddle and black rump and upper tail. All remaining parts are to be white with a minimum of ticking. The symmetry of markings and beauty of pattern characterize the best marked Landseers. Landseers are to be shown in the same classes as blacks unless special classes are provided for them. 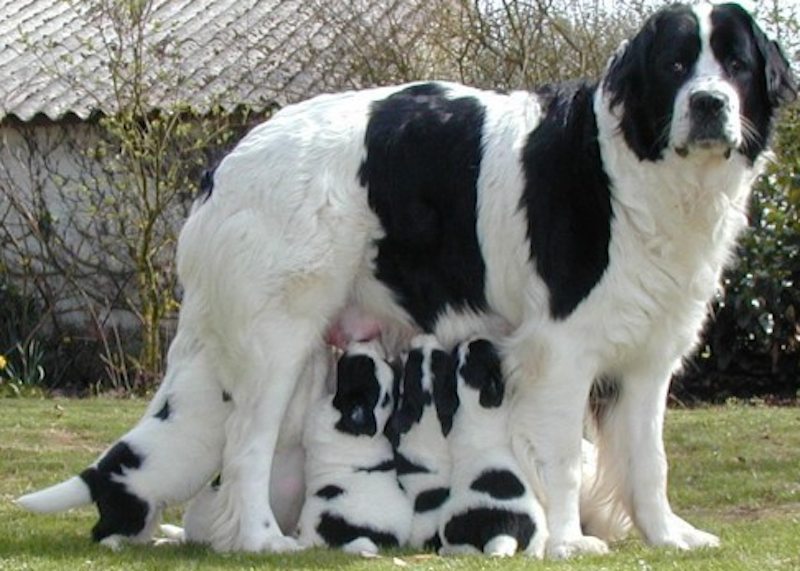 Head: The head is massive with a broad skull, slightly arched crown and strongly developed occipital bone. The forehead and face are smooth and free from wrinkles. The stop is not abrupt. The muzzle is clean-cut and covered with short fine hair. It is rather square, deep and moderately short. The nostrils are well developed. The bitch’s head follows the same general conformation, but is feminine and less massive. A narrow head, snipey or long muzzle is to be faulted. Pronounced flews are not desirable. The eyes are dark brown, relatively small and deep set. They are spaced wide apart and show no haw. Round, protruding or yellow eyes are objectionable. The ears are relatively small and triangular with rounded tips. They are set well back on the side of the head and lie close. When the ear of the adult dog is brought forward, it reaches to the inner corner of the eye on the same side. The teeth meet in a scissors or level bite. Neck: The neck is strong, muscular, and well set on the shoulders. It is long enough to permit dignified head carriage, and should not show surplus dewlap.

Forequarters: When the dog is not in motion, the forelegs are straight and parallel, with the elbows close to the chest. The shoulders are well muscled and well laid back at an angle approaching 45 degrees. The pasterns are slightly sloping. Down in the pasterns is to be faulted. The feet are proportionate to the body in size, well rounded and tight, with firm compact toes (catfoot type). Splayed toes are a fault. Toeing in or out is undesirable.

Body: The Newfoundland’s chest is broad, full and deep, with the brisket reaching to the elbows. The back is broad, with good spread of rib, and the topline is level from the withers to croup, never roached, slack, or swayed. The loins are strong and well muscled, and the croup is broad. The pelvis slopes at an angle of about 30 degrees. Viewed from the side, the body is deep, showing no discernible tuck-up. Bone structure is massive throughout but does not give sluggish appearance.

Hindquarters: Because driving power for swimming, pulling loads or covering ground efficiently is largely dependent upon the hindquarters, the rear structure of the Newfoundland is of prime importance. The hip assembly is broad, strong and well developed. The upper thighs are wide and muscular. The lower thighs are strong and fairly long. The stifles are well bent, but not so as to give a crouching appearance. The hocks are well let down, well apart and parallel to each other. They turn neither in nor out. The feet are firm and tight. Dewclaws, if present, should have been removed. Straight stifles, cow-hocks, barrel legs, and pigeon toes are to be faulted.

Tail: The tail acts as a rudder when the Newfoundland is swimming; therefore it is strong and broad at the base. When the dog is standing the tail hangs straight down, possibly a little curved at the tip, reaching to, or slightly below the hocks; when the dog is in motion or excited, the tail is carried straight out or with slight upward curve but never curled over the back nor curved inward between the legs. A tail with a kink or curled at the end is very objectionable.

Gait: The Newfoundland has good reach and strong drive, giving the impression of effortless power. In motion, the legs move straight forward, parallel to the line of travel. A slight roll is present. As the speed increases, the dog tends to single track, with the topline remaining level. Mincing, shuffling, crabbing, too close moving, weaving, crossing over in front, toeing out or distinctly toeing-in in front, hackney action and pacing are all faults. 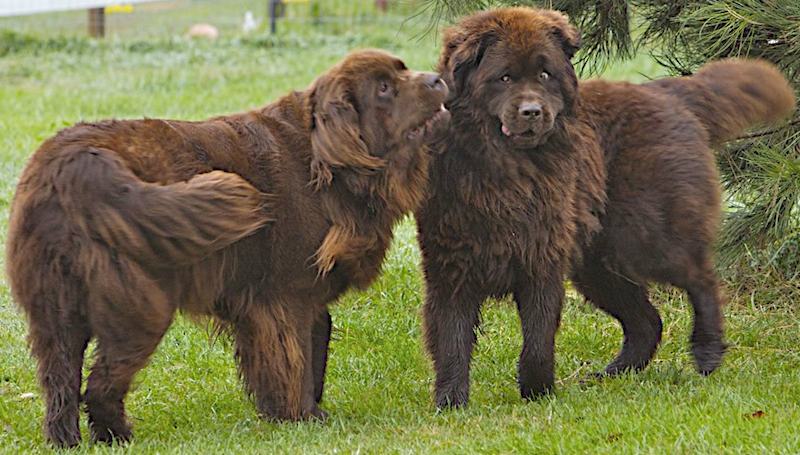 Disqualifications: Bad temperament, short flat-coat (Labrador Retriever type), markings of any other colour than white on a black dog, any colours other than the traditional black, or Landseer (white and black).