Samoyed dog breed was bred and developed by the nomadic Samoyed tribes in Northeast Siberia, north of the Arctic Circle. Samoyed is one of the oldest domesticated breeds of dog. Rather than being bred for a specific purpose,Samoyeds were bred and are noted for their versatility as a sled dog, herding dog, guard dog and companion dog. 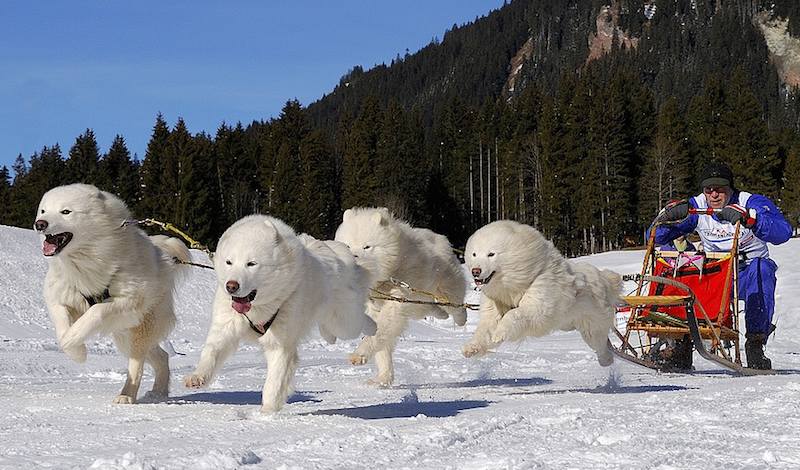 The Samoyed dog breed made a tremendous contribution to the Arctic and Antarctic expeditions as a strong and dependable sled dog. They were used by the Samoyed people as a sled and draught animal as well as to guard and drive reindeer herds from one feeding ground to another. Their importance to the Samoyed people, who depended largely upon their dogs for survival, caused them to be regarded as members of the family and companions, as well as tough, sturdy work animals, which contributed to the unique Samoyed disposition of today. General Appearance: The Samoyed, being essentially a working dog, should present a picture of beauty, alertness and strength, with agility, dignity, and grace. As their work lies in the cold climate, their coat should be heavy and weather resistant, and of good quality rather than quantity. The male carries more of a “ruff” than the female. They should not be long in the back as a weak back would make them practically useless for their legitimate work, but at the same time a close-coupled body would also place them at a great disadvantage as a draught dog. Breeders should aim for the happy medium, a body not long but muscular, allowing liberty, with a deep chest and well-sprung ribs, strong arched neck, straight front and especially strong loins. Males should be masculine in appearance and deportment without unwarranted aggressiveness; bitches feminine without weakness of structure or apparent softness of temperament. Bitches may be slightly longer in back than males. They should both give the appearance of being capable of great endurance but be free from coarseness. Because of the depth of chest required, the legs should be moderately long. Hindquarters should be particularly well developed, stifles well bent and any suggestion of unsound stifles or cow-hocks severely penalized. General appearance should include movement and general conformation indicating balance and good substance.

Substance: The bone is heavier than would be expected in a dog this size but not so massive as to prevent the speed and agility most desirable in a Samoyed. In all builds, the bone should be in proportion to body size. The Samoyed should never be so heavy to appear clumsy nor so light as to appear racy.

Coat and Colour: The Samoyed is a double-coated dog. The body should be well covered with an undercoat of soft, short, thick closed wool with longer, harsher hair growing through it to form the outer coat, which stands straight out from the body and should be free from curl in the adult dog. The coat should form a ruff around the neck and shoulders, framing the head (more on the males than on the females). Quality of the coat should be weather resistant and considered more important than quantity. A droopy coat is undesirable. Length of coat is unimportant when compared to type of coat and texture. The coat should glisten with a silver sheen. The female does not usually carry as long a coat as most males and it may be slightly softer in texture.

Colour: They must be white, white and biscuit, white cream, cream or all biscuit. All of these colours should be considered equal. Any other colours disqualify. Faults: Curly, wavy, flat, droopy, soft or silky outer coat is extremely undesirable. Excessive coat length should be viewed as an exaggeration of type and is a fault. Extremely short, smooth coats are not typical. Lack of undercoat (with seasonal consideration). Coat parting down back is undesirable. Head: Skull: The skull is wedge-shaped, broad, flat, not round or apple-headed, and should form an equilateral triangle on lines between the inner base of the ears and the centre point of the stop. The stop should not be too abrupt, nevertheless well defined. In profile the topline of skull should parallel the topline of muzzle. Muzzle: of medium length and medium width, neither course nor snipy; should taper toward the nose and be proportion to the size of the dog and width of skull. Length of muzzle should be slightly shorter than length of skull. The muzzle must have depth with a strong underjaw. Whiskers should not be removed. Nose: Black for preference, but brown, liver or snow-nose not penalized. Colour of nose sometimes changes with age and weather. Mouth: Lips should be black for preference and slightly curved up at the corners of the mouth, giving the “Samoyed Smile”. Lip lines should not have the appearance of being coarse nor should the flews drop predominately at the corners of the mouth. The teeth should be strong, well-set, and snugly overlapping in a scissors bite. Overshot or undershot should be penalized. Eyes: Should be placed well apart and deep-set; almond shaped rims set with lower lid slanting toward an imaginary point approximating the outer base of the ear. Both eye rims and eye colour should be dark. Round or protruding eyes penalized. Blue eyes disqualify. Ears: Strong and thick, erect, triangular and slightly rounded at the tips; should not be large or pointed, nor should they be small and bear eared. Ears should conform to head size and the size of the dog. They should be mobile and well covered inside with hair; hair full and stand-off before the ears. Length of ear should be same measurement as the distance from the inner base of the ear to the outer corner of the eye.

Neck: Strong, well muscled, moderately long, well arched; carried proudly when standing, set on sloping shoulders to carry head with dignity when at attention. Neck should blend into shoulders with a graceful arch. When moving at a trot, the neck is extended so that the head is carried slightly forward.

Forequarters: Shoulders should be long and sloping, with the shoulder blade well laid back at an ideal angle of 45 degrees to the ground. In the correctly constructed and balanced front assembly, the forelimbs are placed well back on the ribcage, with the point of the sternum (breastbone) well ahead of the front of the shoulder joint (point of shoulder). The length of the shoulder blade is approximately 1/3 the height at the tip of the withers. Upper Arm: The upper arm (humerus) angles backwards from point of shoulder to elbow, ideally forming a 90-degree angle with the shoulder blade, and is never perpendicular to the ground. The measurement from tip of shoulder blade to point of shoulder should equal measurement from point of shoulder to elbow. Lower Arm (Radius & Ulna): When standing and viewed from the front, the legs are moderately spaced, parallel and straight, with elbows close to the body and turned neither in nor out. The angle at the elbow joint should be approximately 135 degrees. Because of depth of chest, legs should be moderately long. Length of lower arm should be 1 to 2 inches longer than length of scapula. Length of leg from ground to elbow should be approximately 55% of the total height at the withers. Pasterns: Should be strong, sturdy and flexible. The pastern slopes at approximately 15 degrees from the vertical, allowing for spring and agility, and should be not more the 1/3 the length of the shoulder blade. Feet: Large, long, flattish, a hare-foot, slightly spread but not splayed; toes arched, pads thick and tough, with protective growth of hair between the toes. In natural stance, feet may be turned very slightly out but excessive turn-out, pigeon-toed, round or cat-footed or splayed are faults.

Topline: The withers forms the highest part of the back. The back should appear level to the loin, medium in length, very muscular, neither long nor short coupled. The ideal length of the Samoyed from tip of sternum (breastbone) to end of pelvis is 10% more than the height at the withers.

Chest: Should be deep, with moderate spring of rib and flattened at the sides to allow proper movement of the shoulders and freedom for the front legs. Should not be barrel-chested. The deepest part of the chest should be near the 9th rib. Heart and lung room are secured more by body depth than width.

Loin: The loin is strong and slightly arched.

Croup: Must be full, slightly sloping and must continue imperceptibly to the root of the tail.

Abdomen: The abdomen should be well shaped and tightly muscled and with the rear of the thorax, should swing up in a pleasing curve (tuck-up).

Upper Thigh: The femur or thigh joins the pelvis at the hip socket, ideally forming a 90-degree angle. The measurement of the femur is equal to the length of the pelvis. Muscle attachments must be very powerful, broad and evenly distributed.

Lower Thigh: The lower thigh, comprised of the tibia and fibula, is ideally set at 90 degrees to the femur or upper thigh and is approximately 1/3 longer than the pelvis. This length is very important to the gait.

Hocks: Should be well developed, sharply defined and set at approximately 30% of hip height. The rear pasterns should be parallel, and perpendicular to the ground in natural stance and forms an angle of about 120 degrees with the lower thigh or fibula and tibia.

Feet: A hare-foot, same as the front feet, although may be slightly longer and narrower than the front.

Tail: The tail should be moderately long with the tail bone terminating approximately at the hock when down. It should be profusely covered with long hair and carried forward over the back and draped to either side when alert but sometimes dropped when at rest. It should not be set high or low, and should be mobile and loose, not tight over the back. A very tight, immobile tail or a double hooked tail is a fault. A judge should see the tail over the back once when judging.

Gait: The Samoyed’s characteristic gait is smooth and seemingly effortless. They are quick and light on their feet and when on a loose lead at a moderately fast trot, exhibit good reach in the forequarter and powerful drive in the hindquarters, allowing them to cover the most ground with the fewest number of steps, expending the least amount of energy to perform the job for which they were bred. Side gait is extremely important in assessing the desired reach and drive in the Samoyed. When viewed from the front or rear, when moving at a walk or slow trot, they will not single-track, but as speed increases, the legs gradually angle inward until the pads are falling on a line directly under the longitudinal centre of the body. As the pad marks converge, the forelegs and hind legs are carried straight forward, with neither elbows nor stifles turned out. The back should remain strong, firm, and level, with very little lateral or vertical displacement. A choppy or stilted or restricted gait should be penalized. Faults: The foregoing description is that of the ideal Samoyed. Any deviation from the

Faults: The foregoing description is that of the ideal Samoyed. Any deviation from the above-described dog must be penalized to the extent of the deviation. Since the Samoyed is a working breed, any faults of soundness should be considered serious.