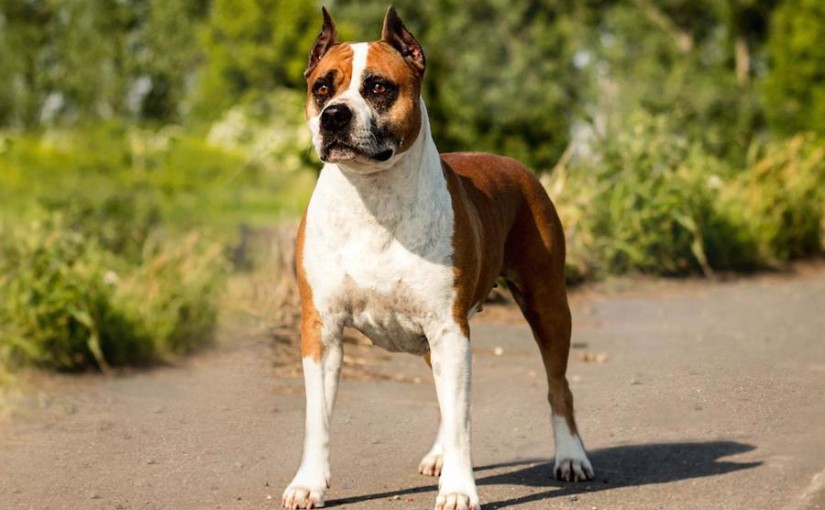 Let us seek some answers related to the American Staffordshire Terrier breed. Are they good dogs for first-time owners? Are they aggressive? Are they banned? Do they bark a lot? Are they good guard dogs? Are they good family dogs? Good with children? and many more questions that a potential dog owner may be concerned about.

American Staffordshire Terrier can make an excellent good first dog for some first-time dog owners. It really depends on the personality of the owner, and how much energy and effort they are willing to put into training and obedience. A responsibly bred, well-socialized AmStaff is a loyal, trustworthy friend to the end.

Is the American Staffordshire terrier a Pitbull?

What is the difference between Pitbull (APBT) and Amstaff?

IMPORTANT: If you are planning to get an Amstaff or a Pitbull, you must be a responsible master with a firm hand. You must learn about his body language and the signs that he is getting ready to fight or attack. This will prevent any untoward incidents.

Is the American Staffordshire Terrier a good guard dog?

Is Amstaff dangerous, aggressive, and unpredictable?

No. The infamous locking jaw is a myth. No type of dog has a mechanism that enables them to lock their top and bottom jaws together.

Is the American Staffordshire Terrier breed a good choice as a family pet dog?

A well-bred, well-raised American Staffordshire Terrier is affectionate, loyal, and good with children, making it an outstanding family pet dog.

Is the American Staffordshire Terrier breed good with children?

A well-bred, well-raised American Staffordshire Terrier is good with kids.

Yes. American Staffordshire Terrier is a loving, loyal, playful dog that loves to spend time with human family members. They are quite muscular for their size, which can make them challenging if they aren’t trained properly. They also have strong jaws.

Yes. The Amstaff makes such sounds. These sounds of grunting are actually called reverse sneezing. Reverse sneezing is when a dog’s throat muscles spasm and soft palate are irritated. The dog will breathe in too much air through his nose and thus begin the worrisome sound of your dog sounding like a pig.

The definition of the best Amstaff puppy depends on your requirements. Your expectations from an adult American Staffordshire Terrier can be broadly categorized as follows: Confirmation for show or breeding; obedience; smart guard dog; companion; homely pet.

Although it is tempting to look for all these qualities in one puppy you are planning to buy, it is almost never possible to find all qualities in a single pup.

If you want your American Staffordshire Terrier puppy to grow up to be a champion in the show ring, you should look for confirmation to the American Staffordshire Terrier dog breed standards. We have put together a general guideline for selecting an all-around good puppy for you. Our guideline not just includes breed standards, but also gives importance to temperament, appearance, physical details, gait, health issues, grooming needs, and maintenance.

Look for the following characteristics while choosing an American Staffordshire Terrier puppy.

The American Staffordshire Terrier should give the impression of great strength for his size, a well put-together dog, muscular, but agile and graceful, keenly alive to his surroundings. He should be stocky, not long-legged, or racy in outline. His courage is proverbial.

The coat should be short, close, stiff to the touch, and glossy. Any color, solid, particolored, or patched is permissible, but all white, more than 80 percent white, black and tan, and liver not to be encouraged.

Medium length, deep through, broad skull, very pronounced cheek muscles, distinct stop; muzzle medium length, rounded on the upper side to fall away abruptly below eyes. Jaws well defined. Underjaw to be strong and have biting power. Lips close and even, no looseness. Nose definitely black. Upper teeth to meet tightly outside lower teeth in front. Eyes dark and round, low down in skull and set far apart. No pink eyelids. Ears set high; cropped or uncropped, the latter preferred. Uncropped ears should be short and held half rose or prick.

Heavy, slightly arched, tapering from shoulders to back of the skull. No looseness of skin Medium length.

Shoulders strong and muscular with blades wide and sloping. Forelegs set rather wide apart to permit chest development. The front legs should be straight, large or round bones, pastern upright. No resemblance of bend in front.

Back fairly short. Slight sloping from withers to rump with gentle short slope at rump to base of the tail. Well-sprung ribs, deep in rear. All ribs close together. Chest, deep and broad. Loins slightly tucked.

Well muscled, let down at hocks, turning neither in nor out. Feet of moderate size, well arched and compact.

Short in comparison to size, low set, tapering to a fine point; not curled or held over back. Not docked.

Must be springy but without roll or pace.