Akita, a Japanese dog breed, dates back nearly 400 years and derives its name from the prefecture of Akita in Northern Japan. In 1931, this dog breed was proclaimed a natural monument by the Japanese Ministry of Education. The government more recently took steps to preserve the Akita breed, which is now regarded as a National Treasure. Primarily, the Akita is a working dog. It was used for hunting bear, wild boar, and sled work; a companion and protector of children and home. 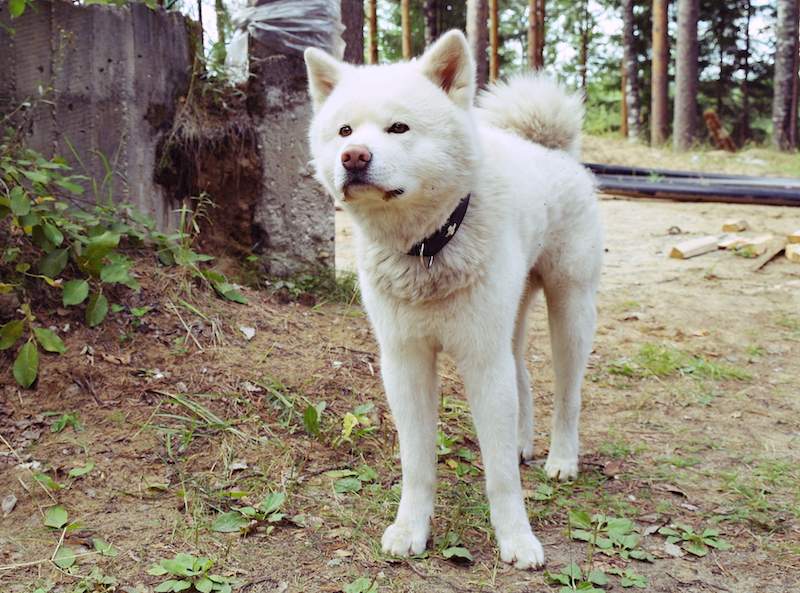 Let us seek some answers related to the Akita breed. Are they hypoallergenic, or do they shed a lot? Do they bark a lot? Are they good guard dogs? Are they good family dogs? Good with children? And many more questions that a potential dog owner may be concerned about.

What is the difference between the American Akita and the Japanese Akita?

Where did the American Akita come from?

The origins of the American Akita follow that of the Akita Inu, in the Akita prefecture region in northern Japan. They originally were medium-sized dogs used for hunting bears and guarding homes. This was around the early part of the sixteen hundreds; this type of Akita was known as a Matagi Akita.

Then as the years progressed, some Japanese owners began to use their Akitas to fight other dogs; as a result of this, the Akita was cross-bred with the Tosa and Mastiff increasing in overall size.

In 1908 dog fighting was prohibited, and this changed the outlook for the Akita as the Japanese breeders wanted to bring back the original characteristics lost by crossbreeding the Matagi Akita. As a result, superior examples of the breed were designated as natural monuments in 1931.

Another significant factor in the history of the Akita was the second world war. During this period, Japanese Akita breeders were ordered to hand over all their dogs to be used as a source of military garments. Some Akita breeders then started to crossbreed with German Shepherds to save the Akita from certain extinction.  By the end of the war, there were at least three different types of Akita in Japan.

In 1937, Helen Keller imported the first Akita into the United States and after the war. American service members of the occupying forces admired the Akita and adopted them. The Akita dog breeds popularity soon increased in the United States.  Most of these Akitas were of the larger type (Dewa line). As the Akita breed grew in popularity, the Akita Club of American was established in 1956, and the American Kennel Club accepted the breed in October 1972.

Do Akitas shed a lot?

Akitas don’t shed year-round, although it might seem that way. They’re a double-coated breed, blowing out their undercoats twice a year. You’ll have large clumps of Akita’s hair all over the place. Regular brushing and vacuuming help reduce the volume of hair in the house.

What is Moku Akita?

Moku is an Akita with a long coat. There are two coat types in the Akita, the standard coat length and the long coat. The long coat Moku is considered a fault in the show ring. The long coat, also known as Moku, results from an autosomal recessive gene and may only occur if both parents are carriers. They have longer and softer coats and are known to have sweeter temperaments. It is believed that this gene comes from the now-extinct Karafuto-Ken Samurai dog. Unlike their short coat cousins, the long coats are less highly prized and thus more affordable.

No! The Akita is a bold and willful dog, naturally wary of strangers but extremely loyal to their family. They tend to be aggressive toward other dogs, especially those of the same sex. They are best suited to a one-dog household. With family, the Akita is affectionate and playful.

Akita is a great dog for the family if you will have just one dog as a pet. Akitas consider themselves a responsible family member. An Akita will wait for its master to be back home from work, will wait for the kids to return safely from school, and protect them once they are back. Also, an Akita is affectionate and playful with all family members. Akita will be a serious, responsible member of your family (not the joker).

Are Akitas good with children?

Can Akita breed be left alone at home?

Yes! Akita is a serious, independent, courageous, mentally strong dog breed. They can be left alone without issues. When left alone, they will consider it their responsibility to protect their home.

Can two Akitas live together?

Male Akitas like to be the dominant force within the pets of a home; they always want to be the alpha dog. Avoid keeping two Akitas of the same sex together.

Can Akita survive in hot weather?

Akitas can survive in hot weather. However, they are better suited to colder climates where their insulating coats can help them rather than make them susceptible to heat stress. A climate-controlled environment, plenty of water, and cool shade are necessary to keep these dogs in good form when it’s super-hot.

Do Akitas need grooming? Hair-cuts? Are they clean?

Akitas are clean dogs and easy to keep groomed by brushing. Akitas are a relatively low-maintenance breed when it comes to grooming needs. They do not need haircuts. They typically blow their coat or shed out the undercoat twice a year. Brushing them during the shedding season helps to keep hair out of the house.

Do Akitas bark a lot?

Akitas do not bark unless there is a good reason. When an Akita is barking, pay attention. They are silent hunters who hunt low to the ground without growls or noise, similar to cats. Akitas may consider small animals as prey and hunt them.

Akitas can swim but may or may not like to swim. It depends on the individual and the circumstances. Fact: Akitas have webbed feet, which do help them in swimming. However, Akita’s webbed feet are thought to have developed to improve their ability to walk on snow more than for swimming.

Do Akitas have a high prey drive?

Akitas are born hunters with a high prey drive and may deem them as prey unless raised with small animals.

Is the Akita a good guard dog?

Akitas do have a very well developed protective instinct. When there is a reason to protect family and property, the Akita will surely do so. They are very quiet dogs and do not bark unless there is a good reason. If you are looking for a guard dog, here is a list of guard dog breeds. The Akita is also a part of this list of amazing guard dog breeds.

Ok, so let’s assume you have chosen the Akita as the best dog breed suitable for yourself. You have decided to find yourself an Akita puppy as your next family member. How will you choose the best pup? Let us look at some standard characteristics of the Akita dog breed, which will help you select the right puppy.

The definition of the best Akita puppy depends on your requirements. Your expectations from an adult Akita can be broadly categorized as follows: Confirmation for show or breeding; obedience; smart guard dog; companion; homely pet.

Although it is tempting to look for all these qualities in one Akita puppy you plan to buy; it is seldom possible to find all qualities in a single pup.

If you want your Akita puppy to grow up to be a champion in the show ring, you should look for confirmation of the Akita dog breed standards. We have put together a general guideline for selecting an all-around good puppy for you. Our guideline includes breed standards and gives importance to temperament, appearance, physical details, gait, health issues, grooming needs, and maintenance.

Look for the following characteristics while choosing an Akita puppy.

Large, powerful, alert, and much substance and heavy bone. The broad head, forming a blunt triangle with a deep muzzle. Small eyes and small erect ears carried forward in line with the neck are characteristic of the breed. The large curled tail, balancing the broadhead, is also characteristic of the Akita breed.

Alert, responsive, dignified, reserved with strangers. An Akita’s nature is to be intensely loyal to its master. The Akita barks infrequently and then only as a warning signal. Fearless when challenged, often dominant over other dogs. Akita’s demeanor suggests activity and agility.

Akita is double-coated: undercoat is soft and dense – shorter than outer coat. The outer coat is straight, harsh, slightly standing off the body. The hair on the head, legs, and ears is short. Length of hair at withers and rump, approximately two inches; except tail, where the coat is longest and most profuse. Any color, white, brindle or pinto. Colors well defined. Markings are well balanced. Whites have no mask. Pintos have a white background with large evenly placed patches covering the head and more than one-third of the body—brindles with or without a mask. If the face has stripes rather than a black mask, they should be uniform. The undercoat may be a different color from the outer coat. Skull is massive but in balance with body, tending to be flat on top with the rest of the head, forming a blunt triangle when viewed from the top. Free from wrinkles when at ease. Median fissure clearly visible and stop well defined. Cheeks moderately developed.

Muzzle – broad, full. Distance from nose to stop is the distance from stop to occiput as two is to three.

The tongue should be pink.

Teeth strong with scissors bite – but level bites acceptable. No black spots on the tongue. Lips black and heavy, but not pendulous.

Ears – of the Akita are characteristic of the breed. They are strongly erect and small concerning the size of the head. Ears are triangular, slightly rounded at tip, wide at the base, set wide on the head, but not too low, and carried slightly forward over eyes in line with the back of the neck.

The neck is thick and muscular, comparatively short, widening gradually towards the shoulders. A pronounced crest blends in with the base of the skull.

Upper Arm – Heavy-boned and straight as viewed from the front. Elbows turning neither in nor out.

Lower Arm – Heavy-boned and straight as viewed from the front. Dewclaws are optional. Chest – It is wide and deep. Depth of chest is half-height of the dog at the shoulder: Ribs well-sprung, brisket will-developed.

Abdomen – Is drawn up and tucked up.

Lower thigh – Should be comparable to forequarters, dewclaws optional.

Hocks – strong hocks, less angular than many breeds (145-160 degrees) turning neither in nor out. (e) Feet – Same as the front.

Large and full, set high and carried over back or against flank in a three quarter, full or double curl, always dipping to or below the back level. On a three-quarter curl, tip drops well down flank. Root thick and strong. The tail reaches hock when let down—hair coarse, straight and full, with no plume appearance.

Brisk and powerful. Vigorous. Back remains firm and level. Rear legs move in line with the front legs.

Faults that are observed in the Akita dog breed standard.

The foregoing description is that of the ideal Akita. Any deviation from the above-described dog must be penalized to the extent of the deviation, keeping in mind the Akita dog breed’s original purpose. Image: Russian President Vladimir Putin poses for the camera as he plays with his dogs Yume, an Akita Inu, front, and Buffy, a Bulgarian shepherd.

Hachiko, one of the world’s most loyal dogs, was an Akita. Story of Hachiko.