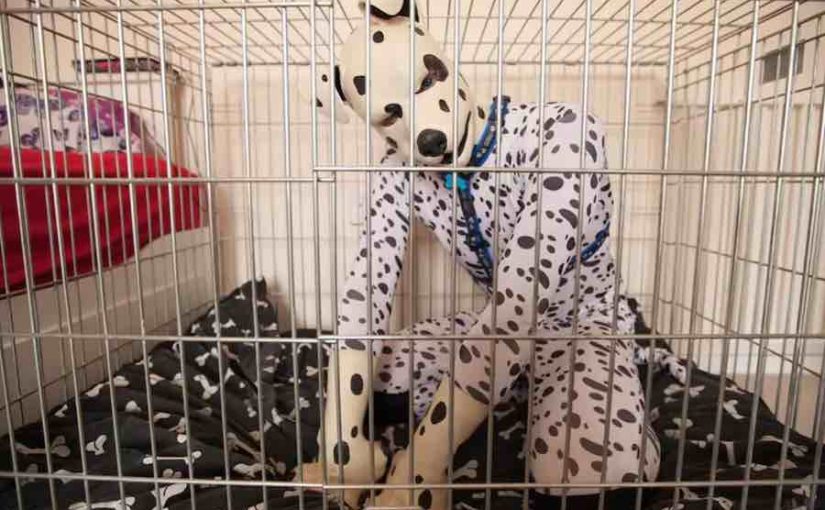 Tom, or ‘Spot’ as he enjoys to be called, is a human puppy!

Human puppy or Human puppies are men and women who like to dress up as they are dogs or puppies!

How do human puppies attend to nature calls!? Interesting question!.. it depends on the role we are in and the level of detail our costume allows.

Tom sleeps in a dog crate to really feel like a dog 🙂 isn’t that sweet?

Tom’s first ‘outfit’ consisted of nothing but a lead and collar. He now has several full dog fetish costumes. Tom (Spot) with his girlfriend

Tom, who was recently crowned Mr. Puppy UK for his canine efforts, is just one of the several ‘dogs’ featured on tonight’s show. He encourages more people to abandon their humanity – and be more dog.

“It’s an incredibly peaceful experience,” claims the 32-year old from behind the latex mask. “You can escape from the hectic life of the human race and really be happy.

“There is a lot of love and care in the community, and I think that is something that is quite often lost in day-to-day life when people are focusing on deadlines and such like. “Being a dog is a chance to relax, to unwind, and just be happy and playful – things most adults have very little time in the day to do. But I don’t do this all the time, I probably spend about a day a week as a puppy – but not all at once. Sometimes it may just be five minutes, and at other times it will be an hour or longer.”

Tom, who also helps new ‘pups’ adapt to their canine lives, has many different versions of his Dalmatian costume; which one he dons depends on where he’s going or what he’s doing. One, a simple, inexpensive outfit, is used when he wants to run around outdoors.

“You can find such enjoyment in simple things – such as getting tennis balls thrown at you! And treats! My pup side doesn’t tend to get me in trouble, but sometimes when I’m in a pet store I can get odd looks from the staff when they see how excited I get over the chew toys.

“But while there are those who clearly don’t understand my motivation,” Tom continues, “I feel as if my pup life is always growing stronger. And the nice thing is that many people – more than you may think are very accepting of it, which has helped my confidence no end.”

Others are following in his footsteps… Pepper the pup, a 23-year-old bitch from Ashford, Kent. This shit is so crazy, we love it. Can’t wait to take this to an entirely new level!