The American pit bull terrier is by far the most misunderstood dog breed. This is due to negative media hype about the breed, stereotypes about the Pitbull breeds, and misinformation that is commonly spread by ignorance of the breed. Here are some commonly asked questions about pit bulls and answers from an experienced pit bull breeder, owner, and trainer that has been hand raising

Is Pit bull a dog breed? Is a Staffordshire bull terrier a pit bull?

Yes and No. Are pit bulls naturally mean, dangerous, or vicious? No, they must be raised this way intentionally by their owner. Can they be mean, dangerous, or vicious? Yes, if these dogs are in the wrong hands, are not socialized properly, or are intentionally made to be this way by the owner, they can be dangerous. While it is highly illegal to raise these dog to fight other dogs, or guard drug houses, or attack people, it is still being done. Fortunately, it is only done by a very small percentage

While it is highly illegal in many places to raise pit bulls to fight other dogs, or guard drug houses, or attack humans, it is still being done. Fortunately, it is only done by a very small percentage of dog owners. The majority of pit bulls are not mean, dangerous, or vicious: When socialized with other dogs and people when they are puppies, they are an extremely lovable dog breed that can be trusted around other people and dogs of all ages.

They are highly trainable, have the ability to learn complicated tasks, and perform excellently as search and rescue dogs.

Can Pit bulls be kept with other dogs?


It will depend on how the pit bulls and other dogs in the pack are raised. This is true for every dog breed. Either the pit bulls or the other dogs can be the source of the two not getting along. However, if both dogs fight, it often results in the pit bull hurting other dogs and is blamed for starting the fight.

If Pit bulls are socialized properly when they were young, they will get along fine with other dogs of all sizes. If you are interested in getting a pit bull and already have other dogs, it would be best to buy a puppy and socialize them daily.

Why do pit bulls attack?


Over aggressive Pit bulls are raised, trained, and socialized improperly. Properly socializing your dog includes taking your Pit Bull puppies to the dog park, participating in training classes, and making sure your dogs are around people and dogs of all ages when they are young.

Can a Pit bull attack its owner?

No, pit bulls are a highly loyal breed. If this ever occurs it is due to poorly raising and socializing the dog and would be a very rare instance.

Another reason can be if the owner is interacting with a sexually charged up dog or a dog who does not consider the handler as a superior. Many Pitbull breeders invite Pitbull males into their kennel for mating. These males are in a new place and handled by new dog handlers. Instances of attacks on humans are possible in such a scenario. If you have brought a male Pitbull for breeding, be aware that you are not the master in the dog’s eyes.

This is a myth. Even when raised improperly, pit bulls will not kill a person. When they attack, it is due to them being raised and socialized improperly by the owner. The reason that they can hurt people more than most other dog breeds is the fact that they have strong jaws and have a bad reputation due to which victims are in shock. Why are Pit Bulls infamous?

Pit bulls have a bad rap due to negative media hype, stereotypes, and a small portion of bad Pitbull owners. Media usual portrays this breed as monsters because it makes a good story. These stories are usually exaggerated, and in some cases the dog in story isn’t even a pit bull or is a pit bull mix. For the majority of the breed, they are lovable and trustworthy dogs.

Do Pit Bulls have locking jaws?

No, they do not have locking jaws.

Are Pit Bulls banned in USA?

No states have enacted breed-specific laws, or BSLs, banning pit bulls. However, there are over 700 U.S. cities in 40 states that have enacted these bans. Additionally, appellate courts in 12 states have upheld the constitutionality of breed-specific pit bull laws, including Arkansas, Colorado, Florida, Iowa, Kansas, Kentucky, New Mexico, Ohio, Utah, Washington, West Virginia, Wisconsin and Washington, D.C.

While breed-specific laws were invented to regulate pit bulls, several U.S. cities have expanded these laws to incorporate other supposedly aggressive dog breeds. Pit bulls, however, continue to be the focal point of BSL laws because they are the most common and are widely believed to have a negative impact on communities.

Are Pit Bulls banned in UK and Europe?

The Pit Bull is banned in UK. and most of Europe.

Where are Pit Bulls banned internationally?

Are Pit Bulls safe to keep with kids?

Generally, Pit Bulls are safe to keep with kids they have been raised with. It is important that the kids does not disturb a sleeping dog, does not snatch the dog’s food, do not poke fingers in the dog’s eyes, etc. It is best to judge their relationship slowly. Every dog is unique, as is every kid.

It’s the owner not the breed. This is 100% true. The Pit Bull is a very dependable and predictable dog breed. A Pit Bull will be as good or as bad as his owner. If you know your dog, you can predict how he will react in almost all situations. This will prevent any untoward incident.

What should I feed my Pit Bull?

Feeding your Pit Bull puppy: Although it is obvious, it is very important to feed good quality balanced diet. Do not feed excess protein rich food or extra calcium. Do not supplement with anything that will accelerate growth at an early stage. Accelerated growth leads to weak bone structure which becomes a problem in the adult dogs. Feed puppy food till the age of about 8 months. After that feed Junior food up to 2 years. The Pit Bull will be an adult at 2 years. Feeding an adult Pit Bull: You should decide the diet of your Pit Bull depending on his activity level. Generally, feeding less is often always healthier than feeding more. A thin Pit Bull will live longer than a fat one.

Which Pit Bull colors are rare? What is a red nose Pit Bull? What is a blue nose Pit Bull? 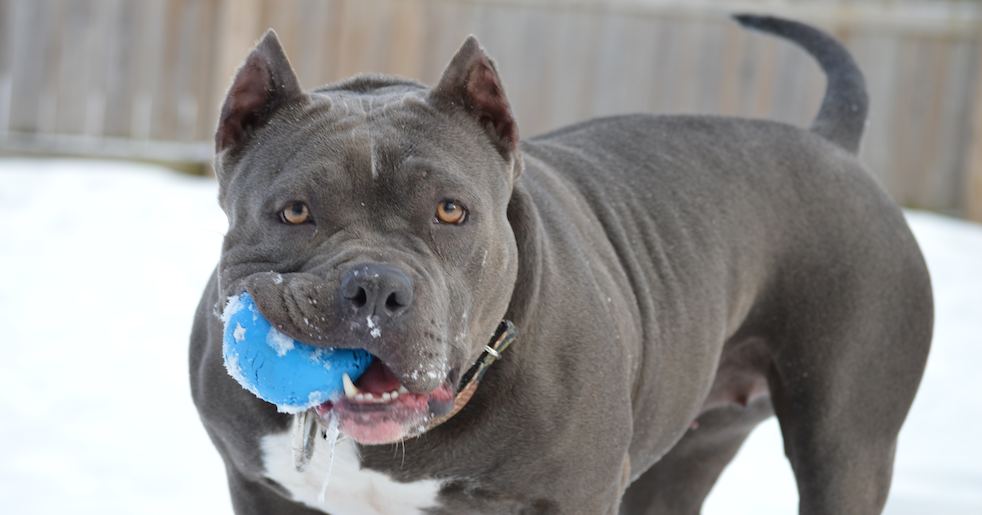 Blue nose Pit Bull is generally blue all over (pic above), may or may not have a blue nose. The Blue color is quite rare amongst dogs.

Is there a miniature Pit Bull?

Staffordshire Bull Terriers look like mini Pit Bull Terriers! They are liked by dog loving families as they are good with kids in the family.

Is there a giant Pit Bull?

Pit bulls only shed a very small amount of hair. Generally shedding is not a problem with Pit Bulls. If you are worried about having hair all over your clothes and home, you don’t need to worry. If you have a blue nose pit bull or dark haired dog, it will even be less noticeable. With regular brushing once a month, you will never notice any shedding. American Staffordshire Terrier and the smaller Staffordshire Bull Terrier shed less compared to the American Pit bull Terrier.

At what age is a Pitbull fully grown?

Pit bulls stop growing at around 2 years of age. However, they tend to thicken up until they are around 3 years old.

When does a pit bull mature?


Pit Bulls reach sexual maturity at around 18 months and can start breeding after this age. Pit bulls usually go into their first heat around 9 months. After that, they will go into heat about every 6 months. If you are breeding your pit bull, it’s not recommended to breed them under the age of 18 months old. Many responsible Pit Bull breeders start breeding after 2 years after the dog’s growth is completed.

When do Pit bulls lose their teeth?


They start losing teeth at various ages. Playing rough and chewing bones can cause them to come out prematurely. However, most start to lose their teeth in the 3-4 month range and are done teething by 6-8 months. The molars are usually some of the last to come out. Most of the other teeth are usually already their adult teeth.

Do you have to cut a Pit bull’s tail?

No. Having the tail for balance is a must. A pit bull puppy can have it’s ears cut anywhere from 9-13 weeks of age. The time frame varies according to the vet that you are using but this is the optimal timeframe. This in no way is done for fighting purposes.

How long does a Pit bull live?

An American Pit Bull Terrier can live anywhere from 8 to 15 years.