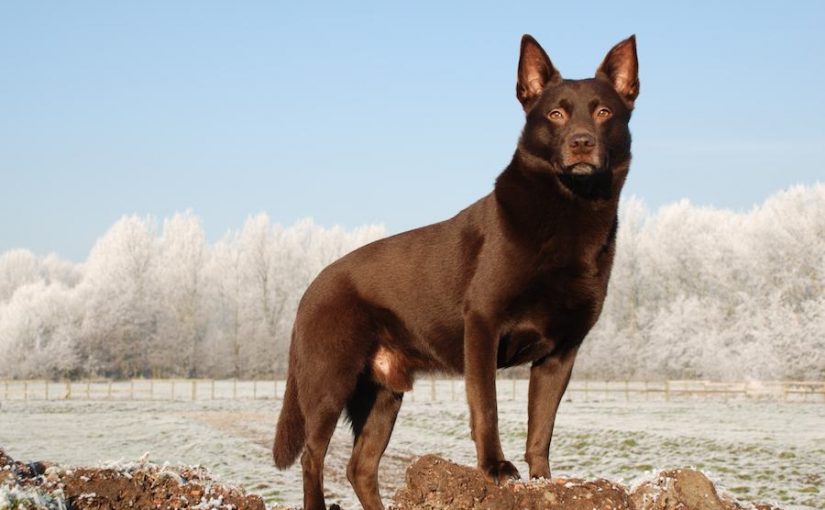 Australian Kelpie (Kelpie) was the name bestowed on a pup from the mating of two black-and-tan Smooth Collies imported to Australia. She was eventually mated to a puppy produced by two more imported sheepdogs, and a female pup from that litter went to C.B.K. King of Wollongough Station, New South Wales. This pup was dubbed ‘Kelpie,’ Gaelic for ‘water sprite,’ after her mother. An impressive win in the first Australian sheepdog trials in 1872 made her famous. Her offspring were known as Kelpie pups, which gave rise to the Australian Kelpie dog breed.

The town of Casterton, located in Victoria’s far southwestern region, is nationally recognized as the ‘Birthplace of the Kelpie’. There’s a lovely bronze statue of a kelpie installed in front of the town hall.

Is the Australian Kelpie a hypoallergenic (non-shedding) breed?

The Australian Kelpie is not a hypoallergenic dog. For such a shorthaired dog, Australian Kelpies shed much more than you might expect. This breed does not generally have a strong doggy smell and requires less bathing unless working livestock. His coat should be brushed at least once a week to remove dirt and loose hair.

Yes. Australian Kelpies have a high tendency to bark, which makes them ideal watchdogs.

An Australian Kelpie makes a good family dog. Almost all working Kelpies live peacefully with other family pets. All dogs need training, and intelligent dogs such as the Kelpie love to learn and take great pleasure in working for their owner’s approval.

Yes, the Kelpie gets on well with children.

No. They are too friendly to be good guard dogs. However, they will protect their family and property when needed.

Are Australian Kelpies aggressive dogs? Do they bite?

The Australian Kelpie is not aggressive but won’t hesitate to protect family members, animals, or property, often without regard for their own safety.

Kelpies are not swimming dogs by origin, but if you accustom the dog with water from a young age, it might start enjoying it.

How long do Australian Kelpies live?

Kelpies usually live 12 to 14 years. Some live longer than 14 years.

The definition of the best Australian Kelpie puppy depends on your requirements. Your expectations from an adult Australian Kelpie can be broadly categorized as follows: Confirmation for show or breeding; obedience; smart guard dog; companion; homely pet.

Although it is tempting to look for all these qualities in one Australian Kelpie puppy you are planning to buy, it is seldom possible to find all qualities in a single pup.

If you want your Australian Kelpie puppy to grow up to be a champion in the show ring, you should look for confirmation of the Australian Kelpie dog breed standards. We have put together a general guideline for selecting an all-around good puppy for you. Our guideline includes breed standards and gives importance to temperament, appearance, physical details, gait, health issues, grooming needs, and maintenance.

Look for the following characteristics while choosing an Australian Kelpie puppy.

The general appearance shall be that of a lithe, active dog of excellent quality, showing hard muscular condition combined with great suppleness of limb and conveying untiring work capability. It must be free from any suggestion of weediness.

The Kelpie is vigilant, eager, and highly intelligent, with a mild, tractable disposition and almost inexhaustible energy marked loyalty and devotion to duty. It has an instinct and aptitude in the working of sheep, both in the open country and in the yard. Any defect of structure or temperament foreign to a working dog must be regarded as uncharacteristic.

Coat The coat is a double coat with a short, dense undercoat. The outer coat is close, each hair straight, challenging, and lying flat so that it is rain-resisting. The coat is longer and forms near the thigh under the body, a mild form of breeching to behind the legs. On the head (including the inside of the ears), the hair is short to the front of the legs and feet. Along the neck, it is longer and thicker, forming a ruff. The tail should be furnished with a good brush. A coat either too long or too short is a fault. As an average, the body’s hair should be from 2 to 3 cm (approx. 0.75 – 1.25 inches) in length. Head: In proportion to the dog’s size, the skull is slightly rounded and broad between the ears. Forehead: running in a straight profile towards a pronounced stop. Cheeks: are neither coarse nor prominent, but round to the fore face, cleanly chiseled and defined. Muzzle: preferably slightly shorter in length than the skull. Lips: tight and clean and free from looseness. Nose: coloring conforms to that of the body coat. The overall shape and contours produce a rather fox-like expression, which is softened by the almond-shaped eyes. Eyes: are almond-shaped, of medium size, clearly defined at the corners, and show an intelligent and eager expression. The color of the eyes to be brown, harmonizing with the color of the coat. In the case of blue dogs, a lighter colored eye is permissible. Ears: are pricked and running to a fine point at the tips, the leather fine but strong at the base, set wide apart on the skull and inclining outwards, slightly curved on the outer edge and moderate size. The inside of the ears is well furnished with hair. Teeth: should be sound, strong, and evenly spaced, the lower incisors just behind but touching the upper that is a scissor bite. The neck is of moderate length, strong, slightly arched, gradually molding into the shoulders, free from throatiness, and showing a fair amount of ruff.

Shoulders: should be clean, muscular, well sloping with the shoulder blades close set at the withers. Upper arm: should be at a right angle with the shoulder blade. Elbows: neither in nor out. Forelegs: should be muscular with strong but refined bone, straight and parallel when viewed from the front. When viewed from the side, the pasterns should show a slight slope to ensure movement flexibility and the ability to turn quickly.

The ribs are well sprung, and the chest must be deep rather than wide, with a firm level topline, strong and well-muscled loins, and good flank depth. The dog’s length from the forechest in a straight line to the buttocks is greater than the height at the withers as 10 is to 9.

Hindquarters should show breadth and strength, with the croup rather long and sloping, the stifles well turned, and the hocks fairly well let down. When viewed from behind, the hind legs, from the hocks to the feet, are straight and placed parallel, neither close nor too wide apart. Feet: should be round, strong, deep in pads, with close-knit, well-arched toes and strong short nails.

The tail during rest should hang in a very slight curve. It may be raised during movement or excitement, but under no circumstances should the tail be carried past a vertical line drawn through the root. It should be furnished with a good brush. Set on a position to blend with sloping croup, and it should reach approximately to the hock.

To produce the almost limitless stamina demanded of a working sheepdog in wide-open spaces, the Kelpie must be perfectly sound, both in construction and movement. Any tendency to cow hocks, bow hocks, stillness, loose shoulders, or restricted movement weaving or plaiting is a serious fault. Movement should be free and tireless, and the dog must have the ability to turn suddenly at speed. When trotting, the feet tend to come closer together at ground level as speed increases, but they stand square when the dog comes to rest.

Faults that are observed in the Australian Kelpie breed.

Any departure from the foregoing points should be considered a fault, and the seriousness with which the fault should be regarded should be in exact proportion to its degree. We hope you enjoyed reading about the Australian Kelpie dog breed. You may consider sharing your views in the comments section below. Inputs and priceless experiences from dog owners, Australian Kelpie breeders, and dog lovers, in general, help us better understand our most loyal friends. Thank you for your interest.

One thought on “Australian Kelpie”