It’s generally believed that Owney’s original owner was a mail clerk because, just as Bob the Railway dog was obsessed with trains, Owney loved the scent and texture of mail bags and followed them by land, train, or boat wherever they went.

When Owney’s owner left for whatever reason, Owney stayed behind at the post office with his precious mailbags. After a while, Owney began to follow the bags, first in mail wagons and then on mail trains. He started to rack up miles, traveling through the county, then the state, and finally the whole United States!

Mail clerks were happy to let him do this because they realized that no train Owney traveled on ever crashed, making Owney a good-luck talisman. So, they started to give him little trinkets and medals to attach to his collar to represent everywhere he’d been. When he’d traveled so much that they could no longer fit on his collar, he got a little jacket instead. 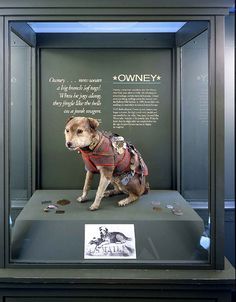 As part of a publicity stunt, Owney traveled around the world on a 120-day-long, Jules Verne–style trip aboard an ocean liner. In this way, he traveled across America, Europe, and Asia, and all the way back! And just in case you don’t yet feel totally inadequate in the face of this small dog’s achievements, he also had his own postage stamp!

Owney was a Border Terrier.