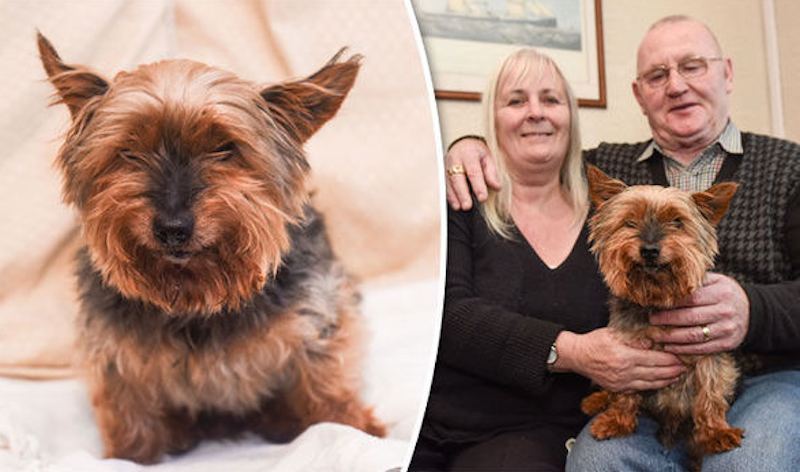 UK’s oldest dog is mauled to death. Yorkshire terrier Jack, 25, dies after being attacked by another pet as he went on his morning walk 🙁 Yorkshire Terrier Jack was 25 last year, making him about 117 in dog years! He was about to set off on his morning walk with his owner Ray Bunn, 70. As he got out of the car he was mauled to death by vicious terrier and died.

The owners of a pet thought to be the UK’s oldest dog have been left heartbroken. While Mr.Bunn was getting Jack out of the car and putting on his lead, a black Lakeland terrier raced towards them and attacked the pet. The second dog, which was not on a lead, bit and scratched Jack as his owner struggled to break up the fight. Mr Bunn, a retired factory worker, said: ‘I am still in shock. We expected Jack to die quietly in his sleep, not in this horrible, violent way.

‘The dog just came out of nowhere and grabbed Jack on his side. He wasn’t on a lead.

‘I was desperate to get the dog off Jack. I punched it, but it was about three minutes before it let go.

‘Jack was bleeding heavily but still breathing. Someone had a blanket and we wrapped him up and put him in the back of the car.’

Mr Bunn and his wife Mary, 66, drove straight to the vets, but Jack died of his injuries before they arrived.

He said he exchanged details with the owner of the Lakeland terrier, and has reported the incident to the police.

‘Mary and I are devastated. Jack was a part of our family, and we just can’t believe he has gone. I am still shaking,’ he added.

‘He was the oldest dog in the country, and for him to die in this way, as opposed to peacefully in his sleep, is a tragedy.’

The couple adopted Jack around 15 years ago after their daughter’s neighbour spotted him being tied to a tree and abandoned.

Mrs Bunn said: ‘The house is so quiet without Jack. We won’t be getting another dog. Jack was irreplaceable.

‘He had his own unique character and was loved by so many people. He was very well known in the area for being the country’s oldest dog. Everybody will be so upset.

‘Jack had me up at 5.45am today and I shouted at him. I feel guilty about that now, but Jack knew he was loved and cared for. He had a very long and happy life, and I take comfort from that.’

Britain’s previous oldest dog was Jack Russell Meg, who died in 2014 at 25.

Most Yorkshire Terriers live for about 12 years.

Jack’s longevity was put down to his diet of sirloin steak and plenty of exercise.

The oldest dog ever to have lived was Bluey, an Australian cattle dog who died in 1939 at the ripe old age of 29.

Cleveland Police confirmed they have logged the attack on Jack, which will be investigated to establish whether or not any offences have been committed.